Paulina Salas, a woman around forty years old, and her husband, Gerardo Escobar, a mid-forties lawyer, are staying in their secluded beach house. The country they live in is “probably Chile,” and is certainly a newly democratic country trying to leave its military dictatorship past behind.

Paulina is waiting for Gerardo to return home, their dinner going cold on the table. It’s already after midnight; the wind is making the curtains billow and the sounds of the sea can be heard. Hearing a car pull up, Paulina retrieves a gun from the sideboard and listens as Gerardo thanks an unknown individual before coming in. He explains that one of his tires had gone out on the way home and a kind passing motorist had stopped to help. Gerardo blames Paulina for the spare tire in their car being flat and quibbles with her over his missing car jack—which she has loaned to her mother.

Gerardo and Paulina then discuss his new job offer: the country’s new president has asked him to head up a new commission to investigate atrocities committed under the previous dictatorship. Gerardo claims he is holding off on taking the job until he has Paulina’s approval. Though she is hesitant about the fact the commission will only look into cases in which victims are dead and is equally concerned that the commission will not have powers to prosecute, she tells him to take the position. In particular, she is frustrated that the commission couldn’t do anything in a case like hers: she was kidnapped, tortured, and repeatedly raped. Just before they retire to bed, though, it becomes clear that Gerardo had already said yes to the president.

During the night, Gerardo and Paulina are unnerved by a knock at the door. It turns out to be Roberto Miranda, the good Samaritan who had stopped to help Gerardo earlier. Roberto has heard about the commission on the radio and decided to come and offer his congratulations—and to save Gerardo a small inconvenience by bringing back his tire. Paulina, seemingly agitated, listens in as Roberto heaps praise on Gerardo; he tells Gerardo that “the real real truth” is that his honorable work will heal the wounds of the country. As it’s getting late, Gerardo insists that Roberto stays the night and shows him to the spare room. Paulina rushes back into bed, pretending to be asleep when Gerardo comes in.

Later in the night, Paulina takes the gun and goes into Roberto’s room. After a brief commotion, Paulina drags the unconscious Roberto into the living room and ties him up to a chair. She stuffs her underwear into his mouth, takes his car keys and drives his car somewhere.

A little while later, Roberto wakes up and is shocked to see that he is tied up and gagged. Paulina, holding the gun, plays a cassette of Schubert’s “Death and the Maiden” that she found in Roberto’s car. She talks about the painful associations she now has with that music; it used to be her favorite piece but has since come to make her physically ill. She asks Roberto if this is the very same cassette that he used to play.

Gerardo comes in dozily, astonished by the scene that presents itself. Paulina refuses to put down the gun, explaining that Roberto is “the doctor who played Schubert.” Even though she was blindfolded when she was raped and tortured, she claims to unmistakably recognize Roberto’s voice. Gerardo moves to untie Roberto, causing Paulina to fire a warning shot, evidently scaring her as much as the other two. Gerardo pleads with Paulina to let Roberto go, telling her that she’s “sick.” She insists that she won’t release him, and that they are going to put Roberto on trial “right here.”

Around midday, Roberto is still tied up. Paulina is staring out at sea and talking intimately to Roberto about her life, specifically about the night she was released from captivity. She explains that her torturers had tried to get her to give up the name of whoever was “fucking” her—Gerardo—but that she had successfully resisted. Gerardo enters, having been to deal with a mechanic that Paulina had called out earlier. They remove Roberto’s gag. Roberto chastises Gerardo for letting his “extremely ill, almost prototypically schizoid” wife behave this way. He claims, contrary to Paulina’s assertions, to have no idea who she is.

Gerardo and Paulina argue about her actions; she insists that if Roberto confesses to raping and torturing her she will set him free (though she admits to fantasizing about doing back to him his own alleged crimes). Furthermore, she wants the confession to be recorded on cassette tape. Gerardo says it’s inevitable he will have to resign due to her actions, but she counters that if she has Roberto’s confession no one will be able to defend him. If he’s innocent, she says, “then he’s really screwed.”

It’s now lunchtime. Gerardo is spoon-feeding soup to Roberto, while Paulina watches on from the terrace. Gerardo explains to Roberto that he thinks the only way for Roberto to free himself is to “indulge” Paulina—he needs to confess, even if he is innocent. Gerardo thinks that a confession, even if it’s false, might “liberate” Paulina from her “phantoms.” Roberto accuses Gerardo of working with Paulina and questions whether Gerardo is a “real man.” If Gerardo thinks he’s guilty, says Roberto, why isn’t he “cutting his balls off” and killing him. Angered by Roberto’s accusation, Gerardo gets up to fetch the gun. Roberto says he was only joking and agrees with Gerardo’s earlier to plan. For a false confession to work, he suggests, Gerardo needs to get him a detailed account from Paulina about exactly what happened to her.

As the evening draws in, Paulina and Gerardo sit outside facing the sea. Roberto is inside, still tied up. Gerardo has the cassette recorder on his lap and is asking Paulina to tell him everything about the terrible events she suffered. Paulina brings up something that’s always annoyed her: that Gerardo was cheating on her while she was being tortured and raped. In fact, he was with the other woman on the night she got released and went to find him. Gerardo grows increasingly exasperated as Paulina forces him to tell her how many times he slept with his other lover. She says that all she wants his him making love to her “without ghosts in the bed and I want you on the Commission defending the truth and I want you in the air I breathe and I want you in my Schubert that I can start listening to again.” He asks her never to mention that “bitch of a night again”—the night of her release—and pleads with her to give him a full account of her rape and torture. Paulina agrees.

Gerardo puts on the cassette recorder as, at his suggestion, Paulina states her name and begins her story. She outlines how she was kidnapped one afternoon on the street, and that one of the peculiar details she remembers is how one of her kidnappers smelled of garlic. Doctor Miranda, she says, didn’t get involved with her until three days later.

At this point Roberto’s voice takes over from Paulina’s, carrying on her train of thought. The room goes dark and the cassette recorder is lit by moonlight. Roberto outlines how he came to be involved with the military regime. His brother, a member of the secret services, had convinced him that his involvement would be vengeance for what happened to their father, who had suffered a heart attack when peasants attacked his land. At first, outlines Roberto, he had tried to help prisoners by ensuring that the torturers didn’t kill them by administering too much electricity; he played Schubert to them to soothe their minds. But the “real real truth” is that over time temptation got the better of him and he gave into his basest desires, enjoying the power that came with raping Paulina. Roberto tells how one of the other torturers, “Stud,” would say that the women “like” being raped.

The lights come up and it’s nearly dawn. Roberto is writing down the words of his confession as Gerardo plays them back to him from the cassette recorder. The confession ends with a plea for “forgiveness” and a promise of “repentance.” Paulina insists that he also write that his confession was made of his own free will. Roberto disagrees, but writes it anyway. Paulina starts listening to the confession from the beginning again. She expresses surprise that, now Roberto has (supposedly) admitted his guilt, Gerardo doesn’t want to kill him. She instructs Gerardo to go and fetch Roberto’s car.

Now left alone with Roberto, Paulina looks outside and says, “it’s going to be a beautiful day.” The only thing needed that would make it perfect, she says, is to kill Roberto. She explains that she deliberately planted small errors in her account when she gave it to Gerardo earlier, suspecting him of wanting to help Roberto. Roberto, in his confession, subconsciously corrected those errors: for example, she had changed “Stud” to “Bud,” an error that Roberto subsequently fixed. She gives him ten seconds to tell her the truth—or she will shoot him. As she counts past up to nine, she asks what there is to lose from “killing one of them?”

Just at this moment, both characters freeze. Mozart’s “Dissonant Quartet” begins to play as a giant mirror descends from the theater ceiling. It reflects the image of the audience back at itself, as a spotlight focuses on two or three audience members at a time.

A few months later, the action shifts to a concert hall (with the mirror still in position). Paulina and Gerardo sit in the audience, witnessing the end of a musical performance. As the applause dies down, Gerardo begins to talk to audience members about the success of his commission—how it is finally helping with the “process of healing.” Just then, Roberto enters cast in a ghostly, “phantasmagoric” light, staring at Paulina. A bell indicates that the concert is about to recommence. “Death and the Maiden” starts to play; Paulina now looks Roberto for a few moments. As the lights go down, she turns her head and faces the mirror while the music plays on. 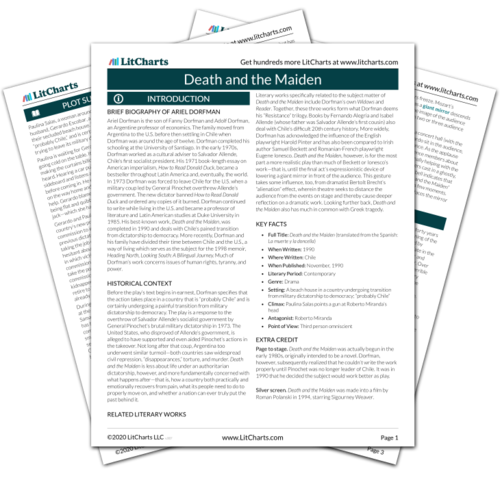 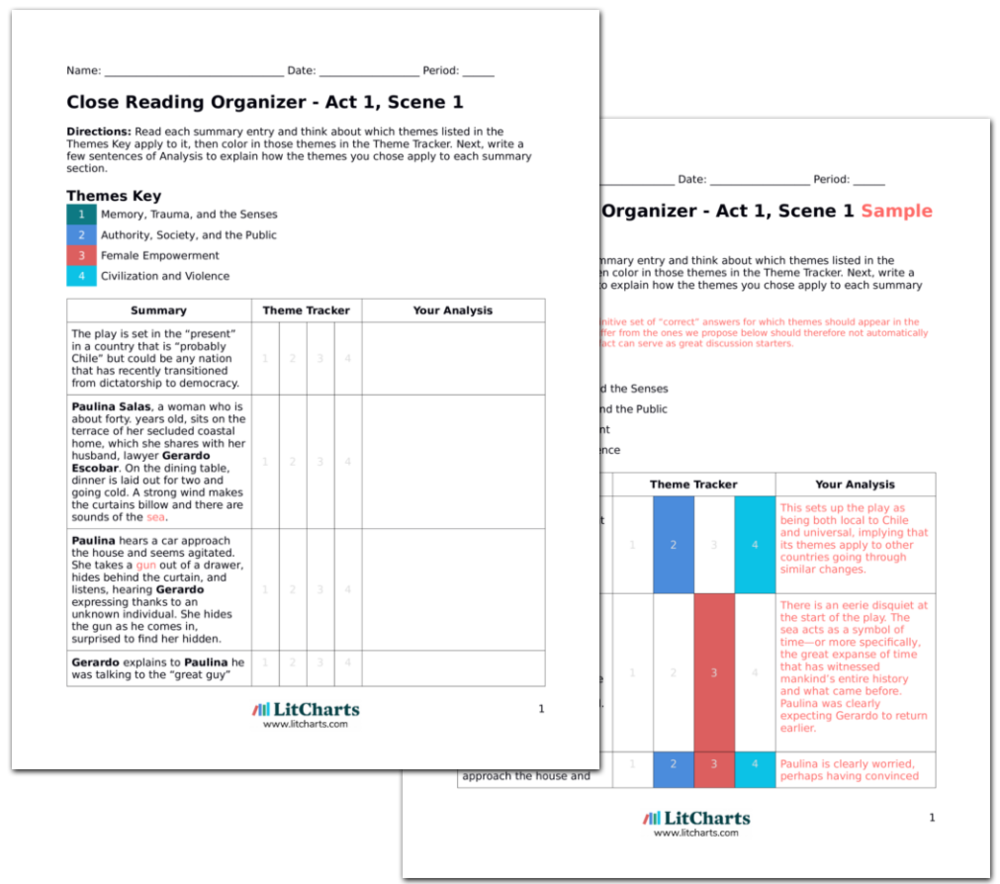