At the end of the story, Armand burns Désirée’s possessions. The bonfire symbolizes both Armand’s anger and desire to rid himself of Désirée, as well as his passion for his lost wife, which was described as “a prairie fire” at the beginning of the story. A bonfire destroys and erases. Yet this bonfire also brings to light the truth of Armand’s past, as he discovers the letter from his mother that reveals her identity as a black woman. Therefore, the bonfire not only symbolizes Armand’s desire to erase Désirée, but also acknowledges the great misjudgment that Armand has made. Before building the bonfire, Armand has already destroyed his marriage, his wife, and his child because of his prejudiced assumption. The bonfire, which is created by Armand to destroy objects, shows that Armand has also created—and is responsible for—the destruction of his family.

The Bonfire Quotes in Désirée’s Baby

The Désirée’s Baby quotes below all refer to the symbol of The Bonfire. For each quote, you can also see the other characters and themes related to it (each theme is indicated by its own dot and icon, like this one:

). Note: all page numbers and citation info for the quotes below refer to the Signet Classics edition of Désirée’s Baby published in 1976.
Désirée’s Baby Quotes

The passion that awoke in him that day, when he saw her at the gate, swept along like an avalanche, or like a prairie fire, or like anything that drives headlong over all obstacles.

In the center of the smoothly swept back yard was a great bonfire. Armand Aubigny sat in the wide hallway that commanded a view of the spectacle; and it was he who dealt out to a half dozen negroes the material which kept this fire ablaze. A graceful cradle of willow, with all its dainty furbishings, was laid upon the pyre, which had already been fed with the richness of a priceless layette. Then there were silk gowns, and velvet and satin ones added to these; laces, too, and embroideries; bonnets and gloves; for the corbeille had been of rare quality.

Unlock with LitCharts A+
Get the entire Désirée’s Baby LitChart as a printable PDF.
"My students can't get enough of your charts and their results have gone through the roof." -Graham S.
Download 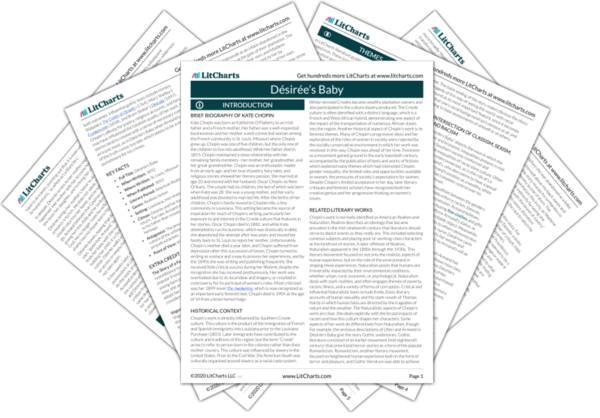 The timeline below shows where the symbol The Bonfire appears in Désirée’s Baby. The colored dots and icons indicate which themes are associated with that appearance.