Download this LitChart! (PDF)
Teachers and parents! Struggling with distance learning? Our Teacher Edition on Disgraced can help.

Welcome to the LitCharts study guide on Ayad Akhtar's Disgraced. Created by the original team behind SparkNotes, LitCharts are the world's best literature guides.

A concise biography of Ayad Akhtar plus historical and literary context for Disgraced.

A quick-reference summary: Disgraced on a single page.

In-depth summary and analysis of every scene of Disgraced. Visual theme-tracking, too.

Explanations of Disgraced's symbols, and tracking of where they appear.

An interactive data visualization of Disgraced's plot and themes.

Ayad Akhtar, who is of Pakistani descent, was born in Staten Island, New York. He majored in theater and religion at Brown University before moving to Italy to work with Polish theater director Jerzy Grotowski. Akhtar subsequently returned to the United States and completed an MFA in film directing at Columbia University. In 2012, Akhtar published his first novel, American Dervish, which garnered widespread critical acclaim. He wrote his first play, Disgraced, the same year, and it premiered at the American Theater Company in Chicago in 2012. The play won the Pulitzer Prize for Drama in 2013, before debuting on Broadway in 2014. Akhtar subsequently wrote several critically acclaimed plays: The Who & The What (premiered in 2014), The Invisible Hand (premiered in 2014), and Junk: The Golden Age of Debt (premiered on Broadway in 2017). Akhtar has received two Tony Award nominations, and he won the American Academy of Arts and Letters Steinberg Playwright Award in 2017. Much of his writing centers on the experiences of Muslim American people.
Get the entire Disgraced LitChart as a printable PDF.
"My students can't get enough of your charts and their results have gone through the roof." -Graham S.
Download 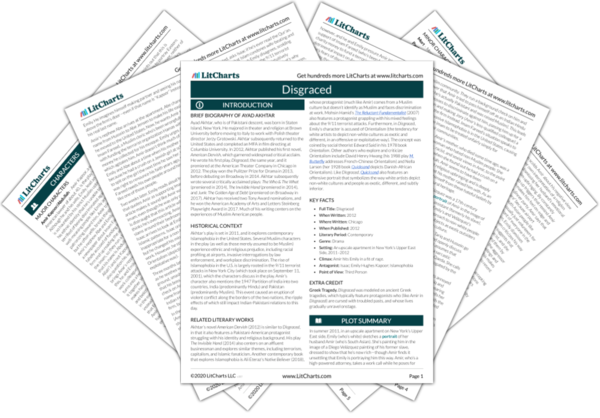 Akhtar’s play is set in 2011, and it explores contemporary Islamophobia in the United States. Several Muslim characters in the play (as well as those merely assumed to be Muslim) experience ethnic and religious prejudice, including racial profiling at airports, invasive interrogations by law enforcement, and workplace discrimination. The rise of Islamophobia in the U.S. is largely rooted in the 9/11 terrorist attacks in New York City (which took place on September 11, 2001), which the characters discuss in the play. Amir’s character also mentions the 1947 Partition of India into two countries, India (predominantly Hindu) and Pakistan (predominantly Muslim). This event caused an eruption of violent conflict along the borders of the two nations, the ripple effects of which still impact Indian-Pakistani relations to this day.

Other Books Related to Disgraced

Akhtar’s novel American Dervish (2012) is similar to Disgraced, in that it also features a Pakistani-American protagonist struggling with his identity and religious background. His play The Invisible Hand (2014) also centers on an affluent businessman and explores similar themes, including terrorism, capitalism, and Islamic fanaticism. Another contemporary book that explores Islamophobia is Ali Eteraz’s Native Believer (2018), whose protagonist (much like Amir) comes from a Muslim culture but doesn’t identify as Muslim and faces discrimination at work. Mohsin Hamid’s The Reluctant Fundamentalist (2007) also features a protagonist grappling with his mixed feelings about the 9/11 terrorist attacks. Furthermore, in Disgraced,  Emily’s character is accused of Orientalism (the tendency for white artists to depict non-white cultures as exotic and different, in an offensive or exploitative way). The concept was coined by social theorist Edward Said in his 1978 book Orientalism. Other authors who explore and criticize Orientalism include David Henry Hwang (his 1988 play M. Butterfly addresses French-Chinese Orientalism) and Nella Larsen (her 1928 book Quicksand depicts Danish-African Orientalism). Like Disgraced, Quicksand also features an offensive portrait that symbolizes the way white artists depict non-white cultures and people as exotic, different, and subtly inferior.
Key Facts about Disgraced

Greek Tragedy. Disgraced was modeled on ancient Greek tragedies, which typically feature protagonists who (like Amir in Disgraced) are cursed with troubled pasts, and whose lives gradually unravel onstage. 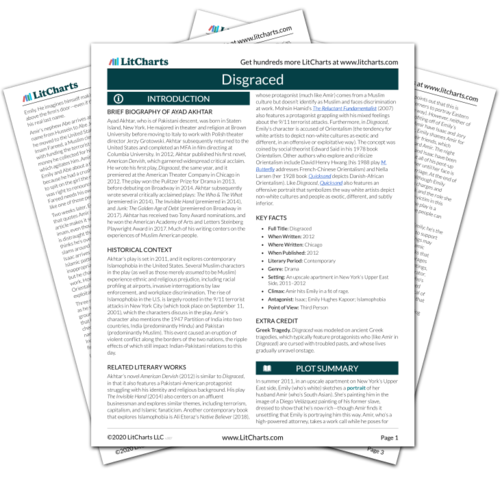 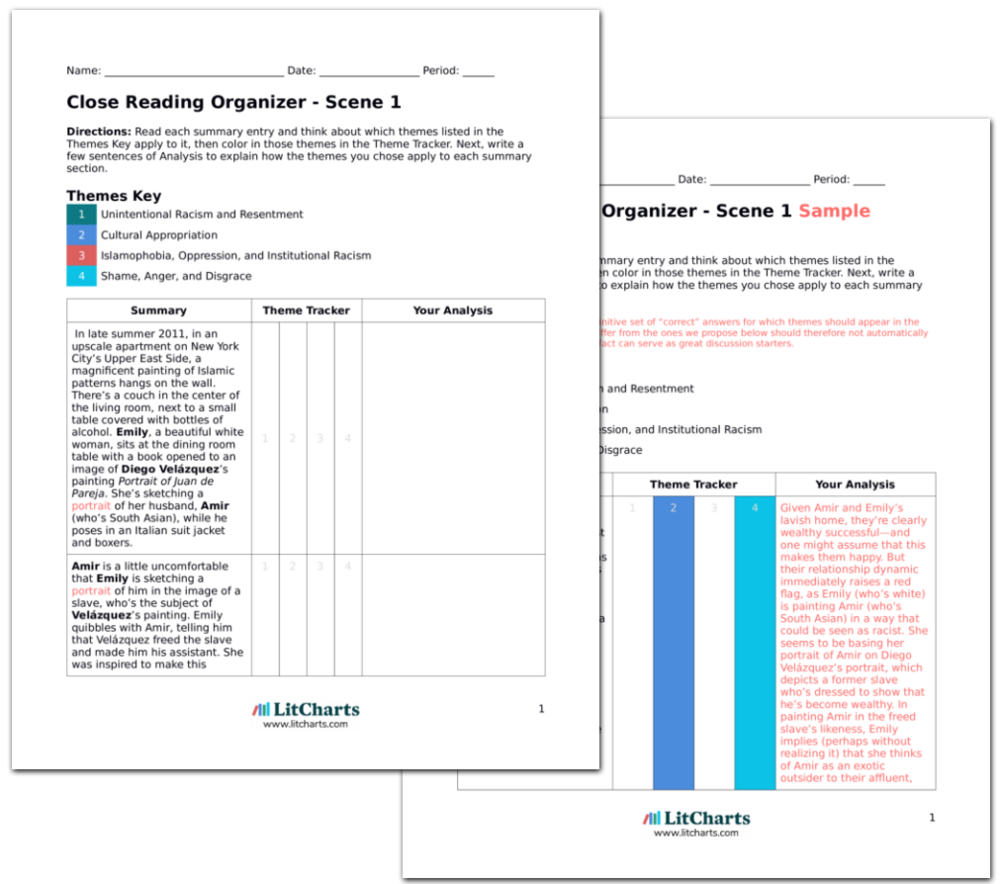