Download this LitChart! (PDF)
Teachers and parents! Struggling with distance learning? Our Teacher Edition on Dune can help.

Welcome to the LitCharts study guide on Frank Herbert's Dune. Created by the original team behind SparkNotes, LitCharts are the world's best literature guides.

A concise biography of Frank Herbert plus historical and literary context for Dune.

A quick-reference summary: Dune on a single page.

In-depth summary and analysis of every chapter of Dune. Visual theme-tracking, too.

Explanations of Dune's symbols, and tracking of where they appear.

An interactive data visualization of Dune's plot and themes.

Frank Herbert was born in Tacoma, Washington, on October 8, 1920. As a child, Herbert was a curious and independent spirit who already knew at eight years old that he wanted to be an author when he grew up. His fierce independence resulted in some difficulties in adult life, with a varied career history in which Herbert refused to be pigeonholed into work he was not passionate about. Upon leaving high school, he worked as a journalist before serving in the United States Navy as a photographer during World War II. Herbert received a medical discharge after six months and went on to study at the University of Washington. He failed to complete a writing qualification because he refused to take required courses if they did not interest him. Herbert started a career in reporting for and editing a number of West Coast newspapers and magazines, while writing fiction on the side. He gained an authorial reputation with the publication of Dune in 1965. A futuristic and ecological novel about human evolution and galactic space travel, Dune has sold more than 12 million copies and been translated into 14 languages. Ironically Herbert’s text was rejected by 23 publishers before Chilton Book Company took a chance on it. The success of Dune resulted in his move to becoming a full-time fiction writer in 1972. After a divorce with his first wife, Flora Parkinson, with whom he had a daughter named Penny Herbert, Frank Herbert married Beverly Stuart in 1946. They had two sons, Brian and Bruce Herbert. Beverly died from cancer in 1984, and Herbert married Theresa Shackleford in 1985. Herbert’s relationships with his children were strained for much of their lives, but he reconciled with Brian shortly before his death. Frank Herbert had a prolific output of almost 30 novels and short story collections—six novels were set in the popular world of Dune—before he died from a pulmonary embolism at age 65 on February 11, 1986. Brian Herbert went on to co-publish stories in the Dune franchise based on his father’s notes.
Get the entire Dune LitChart as a printable PDF.
"My students can't get enough of your charts and their results have gone through the roof." -Graham S.
Download 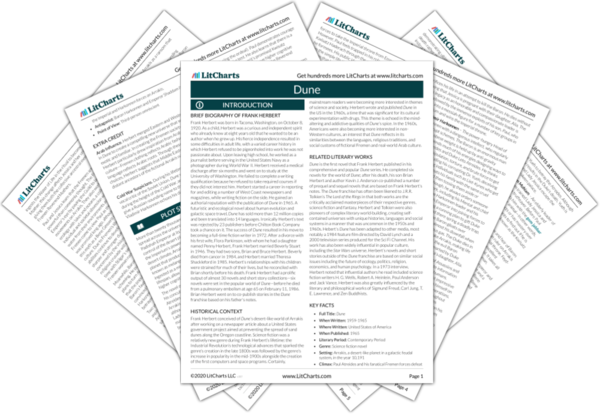 Frank Herbert conceived of Dune’s desert-like world of Arrakis after working on a newspaper article about a United States government project aimed at preventing the spread of sand dunes along the Oregon coastline. Science fiction was a relatively new genre during Frank Herbert’s lifetime: the Industrial Revolution’s technological advances that sparked the genre’s creation in the late 1800s was followed by the genre’s increase in popularity in the mid-1900s alongside the creation of the first computers and space programs. Certainly, mainstream readers were becoming more interested in themes of science and society. Herbert wrote and published Dune in the US in the 1960s, a time that was significant for its cultural experimentation with drugs. This theme is echoed in the mind-altering and addictive qualities of Dune’s spice. In the 1960s, Americans were also becoming more interested in non-Western cultures, an interest that Dune reflects in its similarities between the languages, religious traditions, and social customs of fictional Fremen and real-world Arab culture.

Other Books Related to Dune

Dune is the first novel that Frank Herbert published in his comprehensive and popular Dune series. He completed six novels for the world of Dune; after his death, his son Brian Herbert and author Kevin J. Anderson co-published a number of prequel and sequel novels that are based on Frank Herbert’s notes. The Dune franchise has often been likened to J.R.R. Tolkien’s The Lord of the Rings in that both works are the critically acclaimed masterpieces of their respective genres, science fiction and fantasy. Herbert and Tolkien were also pioneers of complex literary world-building, creating self-contained universes with unique histories, languages and social systems in a manner that was uncommon in the 1950s and 1960s. Hebert’s Dune has been adapted to other media, most notably a 1984 feature film directed by David Lynch and a 2000 television series produced for the Sci Fi Channel. His work has also been widely influential in popular culture, including the Star Wars universe. Herbert’s novels and short stories outside of the Dune franchise are based on similar social issues including the future of ecology, politics, religion, economics, and human psychology. In a 1973 interview, Herbert noted that influential authors he read included science fiction writers H. G. Wells, Robert A. Heinlein, Poul Anderson and Jack Vance. Herbert was also greatly influenced by the literary and philosophical works of Sigmund Freud, Carl Jung, T. E. Lawrence, and Zen Buddhists.
Key Facts about Dune

Cold War Suspicions. During his lifetime, Frank Herbert was a vocal critic of the Soviet Union. Dune was published in 1965 during the height of the Cold War, and Herbert’s decision to give a Russian-sounding name to the novel’s antagonist Baron Vladimir Harkonnen echoes his distrust of the Soviet Union. 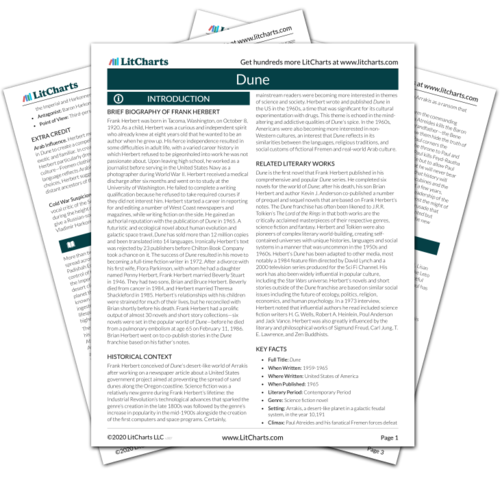 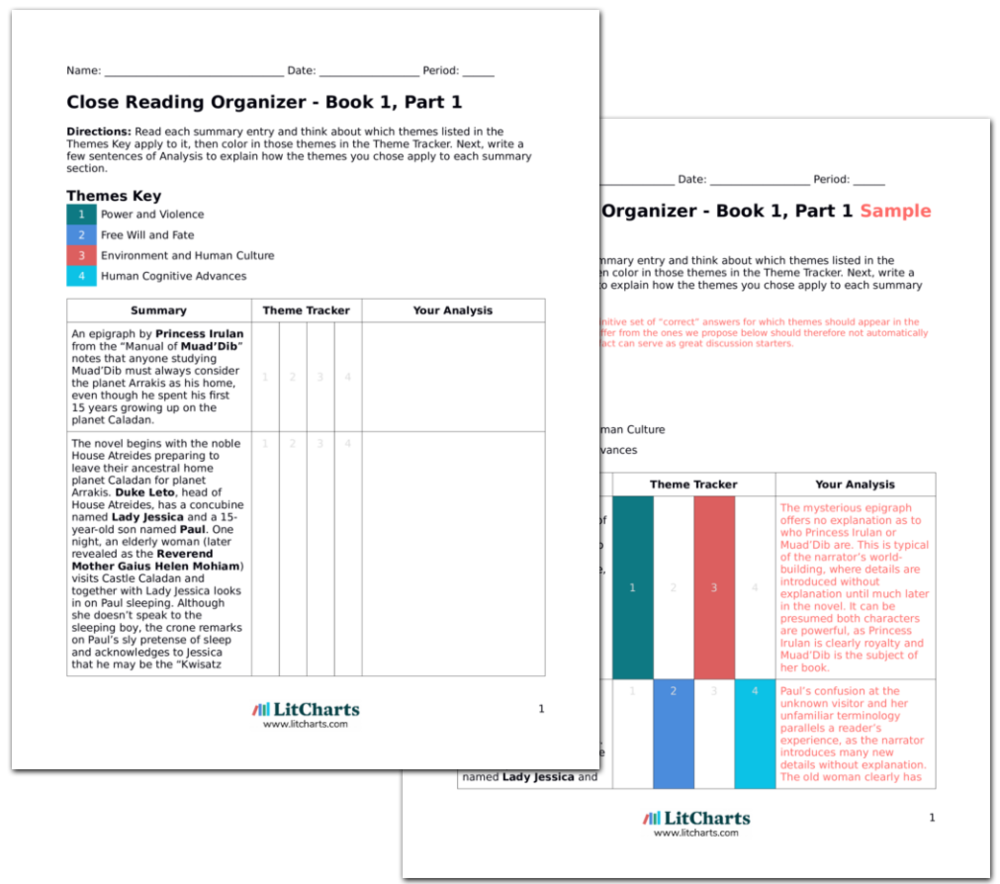