Download this LitChart! (PDF)
Teachers and parents! Struggling with distance learning? Our Teacher Edition on Dune Messiah can help.

Welcome to the LitCharts study guide on Frank Herbert's Dune Messiah. Created by the original team behind SparkNotes, LitCharts are the world's best literature guides.

A concise biography of Frank Herbert plus historical and literary context for Dune Messiah.

A quick-reference summary: Dune Messiah on a single page.

In-depth summary and analysis of every chapter of Dune Messiah. Visual theme-tracking, too.

Explanations of Dune Messiah's symbols, and tracking of where they appear.

An interactive data visualization of Dune Messiah's plot and themes.

Frank Herbert was born in rural Washington and spent his youth exploring the Olympic peninsula. Apart from being an avid reader, Herbert showed an early interest in photography, and he invested in modern cameras throughout his teenage years. Herbert’s parents experienced poverty after the Great Depression and sent Herbert to live with an aunt and uncle in Salem, Oregon when he was 18. After graduating from Salem High School, Herbert worked for various newspapers, lying about his age to get hired. He served the Navy briefly as a photographer until a head injury caused him to be discharged. During this time, Herbert married and had a daughter, Penelope. After he and his first wife divorced, Herbert attended the University of Washington where he took creative writing classes and met Beverly Ann Stuart. Herbert and Stuart married in 1946 and moved to Santa Rosa, California where they had two sons, Brian Patrick and Bruce Calvin. In 1952, Herbert’s first science fiction story, “Looking for Something,” was published in the magazine Startling Stories. He published several subsequent stories after this and began working on the Dune series in 1959. After being published in two parts by a magazine and then being rejected by over 20 book publishers, Dune was finally published in 1965, and Dune Messiah in 1969. The Dune series was slow to bring Herbert success, and it was not until 1972 that he was able to retire from writing for newspapers and finish the Dune series, as well as several other works of science fiction. In 1974, Beverly was diagnosed with cancer; she died in 1984. 1984 also saw the release of the highly anticipated Dune movie, directed by David Lynch, was released, though the film yielded disappointingly poor reviews. In 1985, Herbert married again, but he soon underwent surgery for pancreatic cancer in 1986. While in recovery, he died suddenly of a pulmonary embolism, leaving the seventh and final installment of his Dune series unfinished.
Get the entire Dune Messiah LitChart as a printable PDF.
"My students can't get enough of your charts and their results have gone through the roof." -Graham S.
Download 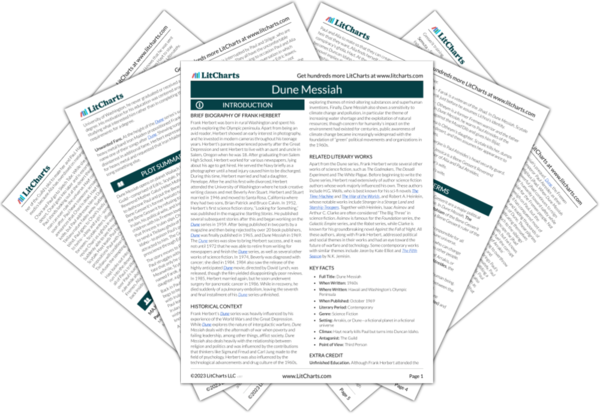 Frank Herbert’s Dune series was heavily influenced by his experience of the World Wars and the Great Depression. While Dune explores the nature of intergalactic warfare, Dune Messiah deals with the aftermath of war when poverty and failing leadership, among other things, afflict society. Dune Messiah also deals heavily with the relationship between religion and politics and was influenced by the contributions that thinkers like Sigmund Freud and Carl Jung made to the field of psychology. Herbert was also influenced by the technological advancements and drug culture of the 1960s, exploring themes of mind-altering substances and superhuman inventions. Finally, Dune Messiah also shows a sensitivity to climate change and pollution, in particular the theme of increasing water shortage and the exploitation of natural resources; though concern for humanity’s impact on the environment had existed for centuries, public awareness of climate change became increasingly widespread with the foundation of “green” political movements and organizations in the 1960s.

Other Books Related to Dune Messiah

Apart from the Dune series, Frank Herbert wrote several other works of science fiction, such as The Godmakers, The Dosadi Experiment and The White Plague. Before beginning to write the Dune series, Herbert read extensively of author science fiction authors whose work majorly influenced his own. These authors include H.G. Wells, who is best known for his sci-fi novels The Time Machine and The War of the Worlds, and Robert A. Heinlein, whose notable works include Stranger in a Strange Land and Starship Troopers. Together with Heinlein, Isaac Asimov and Arthur C. Clarke are often considered “The Big Three” in science fiction. Asimov is famous for the Foundation series, the Galactic Empire series, and the Robot series, while Clarke is known for his groundbreaking novel Against the Fall of Night. All these authors, along with Frank Herbert, addressed political and social themes in their works and had an eye toward the future of warfare and technology. Some contemporary works with similar themes include Jaran by Kate Elliot and The Fifth Season by N.K. Jemisin.
Key Facts about Dune Messiah

Unfinished Education. Although Frank Herbert attended the University of Washington, he never graduated or received a degree. His motivation for his education was centered around studying what interested him rather than in completing the requirements for a degree.

Unwanted Fans. At the height of the Dune series’s success, the heavy metal band Iron Maiden propositioned Frank Herbert to name one of their songs after Dune. Showing surprising disinterest in additional fame, Herbert expressed his distaste for heavy metal and requested that Iron Maiden name their song something else. 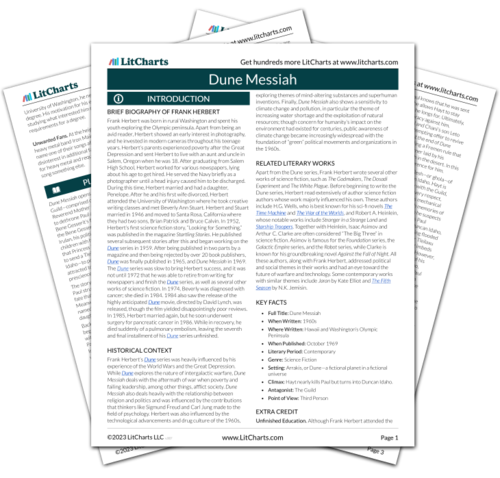 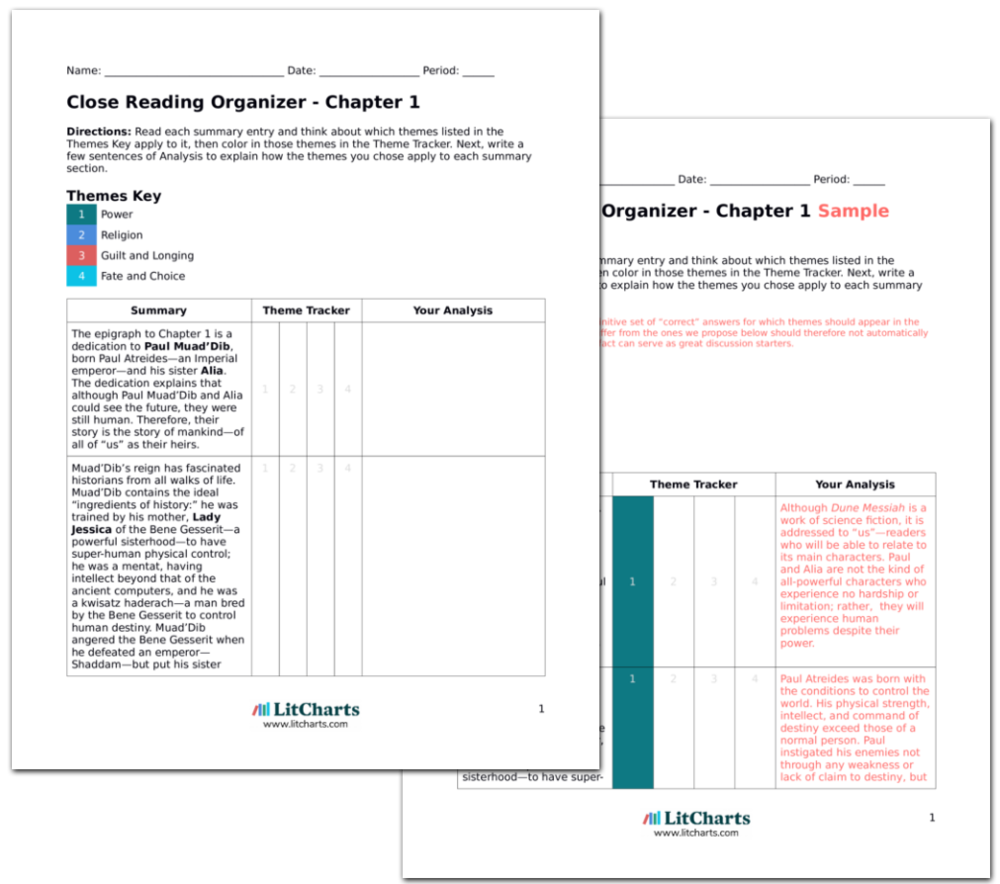