Welcome to the LitCharts study guide on Tara Westover's Educated. Created by the original team behind SparkNotes, LitCharts are the world's best literature guides.

A concise biography of Tara Westover plus historical and literary context for Educated.

A quick-reference summary: Educated on a single page.

In-depth summary and analysis of every chapter of Educated. Visual theme-tracking, too.

Explanations of Educated's symbols, and tracking of where they appear.

An interactive data visualization of Educated's plot and themes.

Born in a rural Idaho town to Mormon fundamentalist parents, Tara Westover spent her childhood and teen years working in her father’s scrap yard, helping her mother concoct and bless herbal tinctures, and attending a small, devout local church. Skeptical of public education, medical institutions such as hospitals and clinics, and the U.S. government’s role in its citizens’ lives more broadly, Tara’s parents lived a self-sufficient lifestyle, homeschooling their children and tending to even serious injuries with herbal tinctures. The Westover home was plagued by physical and emotional violence, as well as a series of traumatic accidents which devastated the health and well-being of several members of Tara’s large family. As Tara grew older, she became curious about the world beyond her small town and the role education could play in her life. Rebelling against her parents’ wishes, she applied to and eventually attended Brigham Young University, a Mormon college in Utah, and eventually went on to study at Cambridge University and accept a fellowship at Harvard. As Tara moved back and forth between the new world her education opened up to her and the black hole of her abusive, delusional family, she spiraled into a depression, and was forced to make a choice that would forever alter the landscape of her life. Tara Westover’s unique story has captivated readers around the United States and the world, and her 2018 book, Educated, has been shortlisted for awards from the National Books Critics Circle and PEN/America, and has topped the New York Times bestseller list.
Get the entire Educated LitChart as a printable PDF.
"My students can't get enough of your charts and their results have gone through the roof." -Graham S.
Download it! 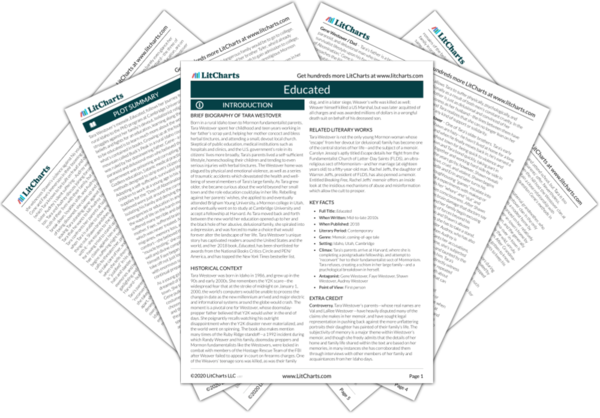 Tara Westover was born in Idaho in 1986, and grew up in the 90s and early 2000s. She remembers the Y2K scare—the widespread fear that at the stroke of midnight on January 1, 2000, the world’s computers would be unable to process the change in date as the new millennium arrived and major electric and informational systems around the globe would crash. The moment is a pivotal one for Westover, whose doomsday-prepper father believed that Y2K would usher in the end of days. She poignantly recalls watching his outright disappointment when the Y2K disaster never materialized, and the world went on spinning. The book also makes mention many times of the Ruby Ridge standoff—a 1992 incident during which Randy Weaver and his family, doomsday preppers and Mormon fundamentalists like the Westovers, were locked in combat with members of the Hostage Rescue Team of the FBI after Weaver failed to appear in court on firearms charges. One of the Weavers’ teenage sons was killed, as was their family dog, and in a later siege, Weaver’s wife was killed as well; Weaver himself killed a US Marshal, but was later acquitted of all charges and was awarded millions of dollars in a wrongful death suit on behalf of his deceased son.

Other Books Related to Educated

Tara Westover is not the only young Mormon woman whose “escape” from her devout (or delusional) family has become one of the central stories of her life—and the subject of a memoir. Carolyn Jessop’s aptly titled Escape details her flight from the Fundamentalist Church of Latter-Day Saints (FLDS), an ultra-religious sect of Mormonism—and her marriage (at eighteen years old) to a fifty-year-old man. Rachel Jeffs, the daughter of Warren Jeffs, president of FLDS, has also penned a memoir. Entitled Breaking Free, Rachel Jeffs’ memoir offers an inside look at the insidious mechanisms of abuse and misinformation which allow the cult to prosper.
Key Facts about Educated

Controversy. Tara Westover’s parents—whose real names are Val and LaRee Westover—have heavily disputed many of the claims she makes in her memoir, and have sought legal representation in pushing back against the more unflattering portraits their daughter has painted of their family’s life. The subjectivity of memory is a major theme within Westover’s memoir, and though she freely admits that the details of her home and family life shared within the text are based on her memories, in many instances she has corroborated them through interviews with other members of her family and acquaintances from her Idaho days. 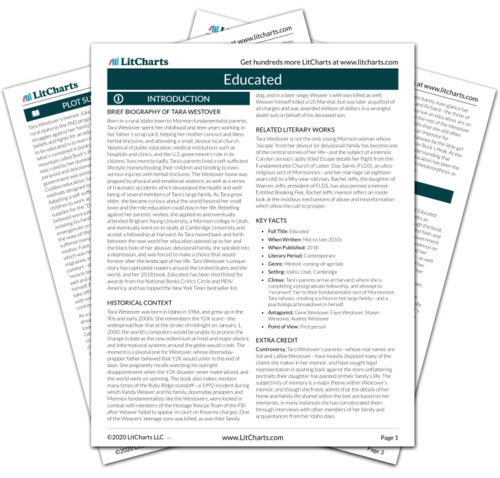 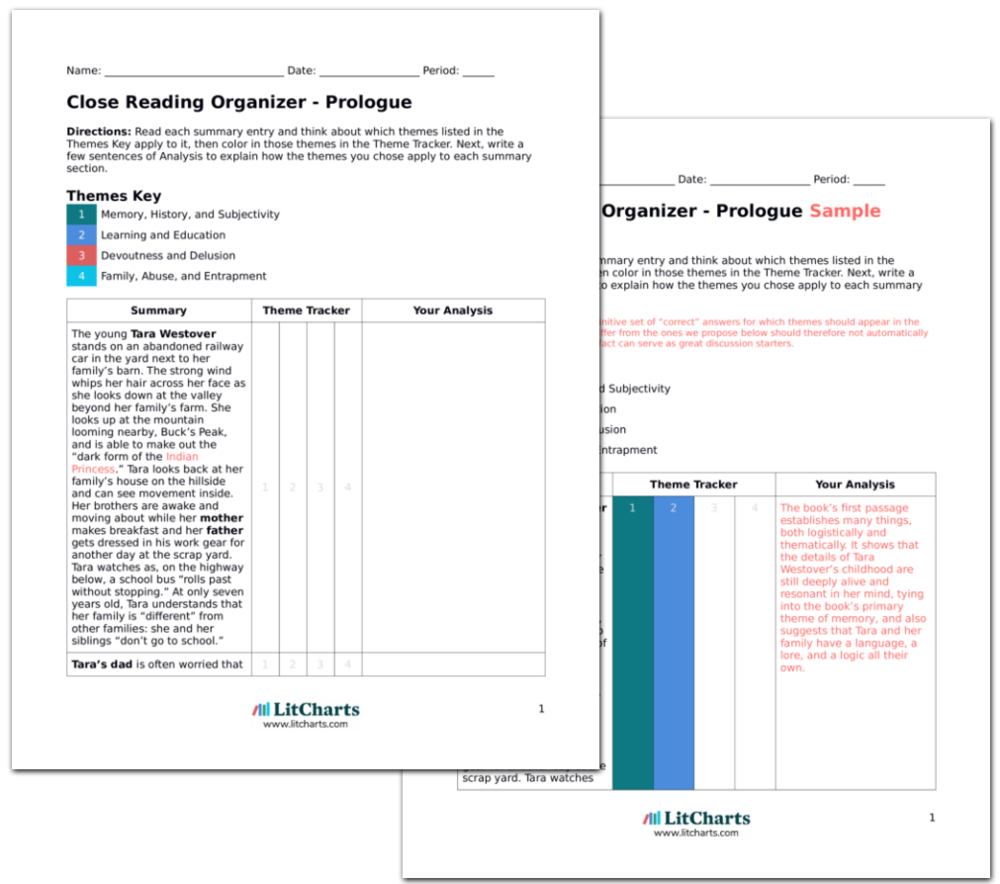