The unnamed narrator of “Elephant” has a lot of responsibility. He’s always writing checks to various family members in need: his brother Billy is going to lose his house, his retired mother is too old to work, his ex-wife is entitled to alimony, his daughter has two kids and a layabout husband, and his son is in debt from school. Practically all of the narrator’s money goes to his family—he can’t afford to eat out or see a movie, let alone fix a hole in his shoe or go to the dentist. And throughout most of the story, the narrator’s thoughts of his family are consumed by his resentment of their dependence on him (which he sees as neediness and irresponsibility) and his bitterness that their needs mean de-prioritizing his own.

But the narrator’s attitude begins to change after two dreams in the same night make him reconsider his notion of dependency. In the first, he’s a child being carried on his father’s shoulders—his father is physically supporting him, just as the narrator now financially supports his family—and it’s an experience of pure joy. The dream reminds the narrator that he was once dependent on his father, as many others in their family were, and it helps the narrator recognize the comfort and security that his support gives to those he loves. In the narrator’s second dream, he relives a memory from the days when he was a violent alcoholic, one in which he drunkenly threatened his son. The narrator’s dependency in this context is on alcohol, and it led to the dissolution of his family. Seeing how his own dependency wrecked his life gives him more empathy for various members of his family—he was at rock bottom then, and they’re at rock bottom now. They need him, and he’s in a position to help.

After these two dreams, the narrator’s attitude transforms. As he thinks of his family while walking to work, he’s no longer consumed by calculating his debts or judging their choices. Instead, he focuses on the love that he has for his family and his good wishes for their lives. When he thinks of them this way, his own problems don’t seem so bad—he can go without milk for his coffee, and he can walk to work in the sunshine to save on gas. This ending reconfigures dependency as a type of relationship that can be loving and meaningful, not simply a symptom of a person’s recklessness or bad morals.

The ThemeTracker below shows where, and to what degree, the theme of Dependency appears in each chapter of Elephant. Click or tap on any chapter to read its Summary & Analysis.
How often theme appears:
chapter length:
Chapter
Elephant
Get the entire Elephant LitChart as a printable PDF.
"My students can't get enough of your charts and their results have gone through the roof." -Graham S.
Download 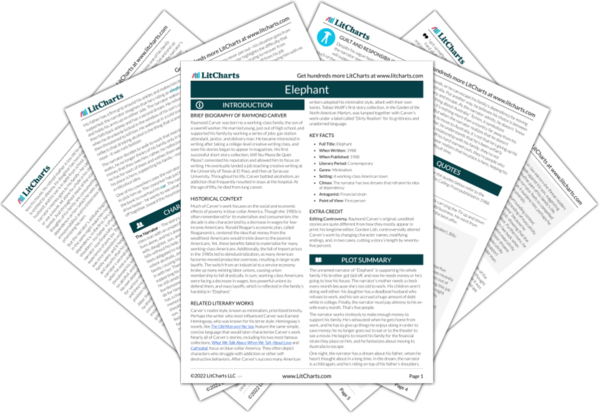 Below you will find the important quotes in Elephant related to the theme of Dependency.
Elephant Quotes

Once, long ago, when I used to think like a man about these things, I threatened to kill that guy. But that’s neither here nor there. Besides, I was drinking in those days.

Everything in the trailer. Every stick of furniture was gone when she came home from work after her first night at the cannery. There wasn’t even a chair left for her to sit down on.

This was a materialist society, and he simply couldn’t take it anymore. People over here, in the U.S., couldn’t hold a conversation unless money figured in it some way, and he was sick of it.

Then I did let go. I turned loose and held my arms out to either side of me. I kept them out there like that for balance. My dad went on walking while I rode on his shoulders. I pretended he was an elephant. 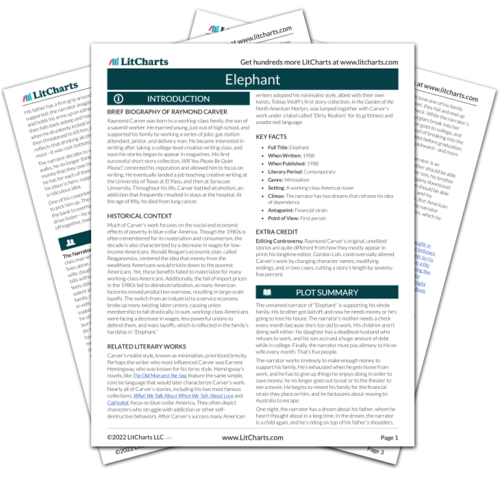 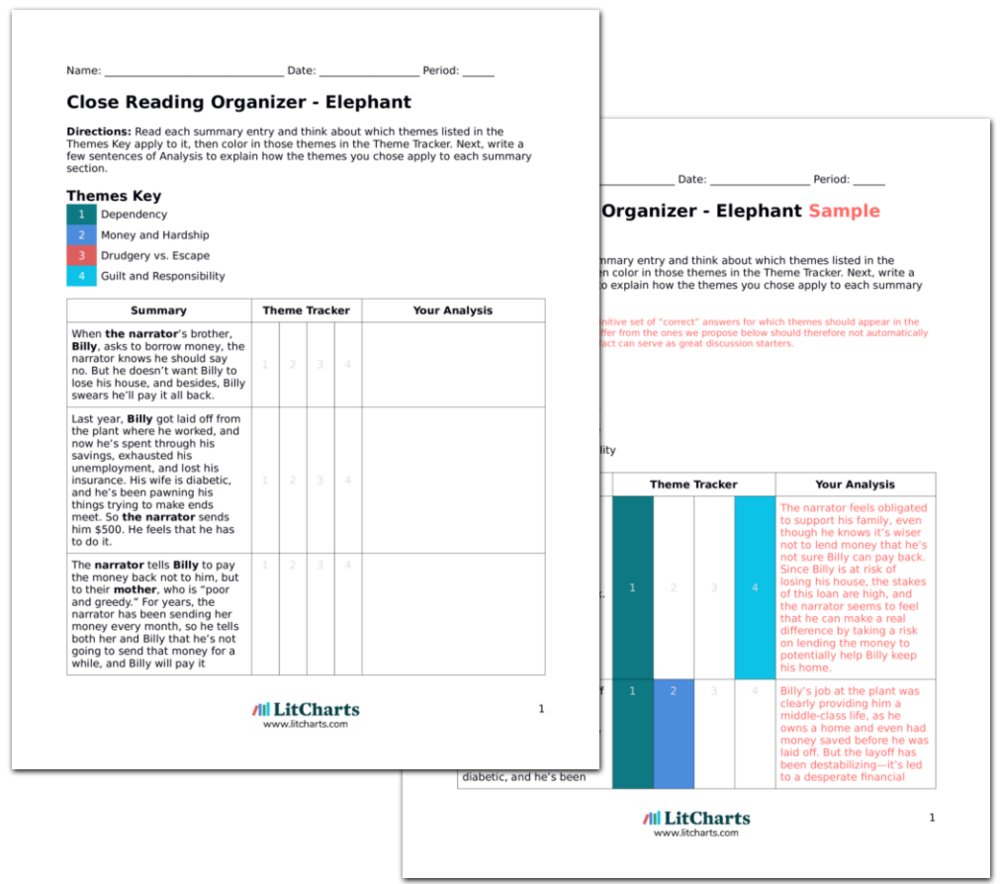