Download this LitChart! (PDF)
Teachers and parents! Struggling with distance learning? Our Teacher Edition on For Whom the Bell Tolls can help.

Welcome to the LitCharts study guide on Ernest Hemingway's For Whom the Bell Tolls. Created by the original team behind SparkNotes, LitCharts are the world's best literature guides.

For Whom the Bell Tolls: Introduction

A concise biography of Ernest Hemingway plus historical and literary context for For Whom the Bell Tolls.

For Whom the Bell Tolls: Plot Summary

A quick-reference summary: For Whom the Bell Tolls on a single page.

For Whom the Bell Tolls: Detailed Summary & Analysis

In-depth summary and analysis of every chapter of For Whom the Bell Tolls. Visual theme-tracking, too.

For Whom the Bell Tolls: Themes

Explanations, analysis, and visualizations of For Whom the Bell Tolls's themes.

For Whom the Bell Tolls: Quotes

For Whom the Bell Tolls's important quotes, sortable by theme, character, or chapter.

For Whom the Bell Tolls: Characters

Description, analysis, and timelines for For Whom the Bell Tolls's characters.

For Whom the Bell Tolls: Symbols

Explanations of For Whom the Bell Tolls's symbols, and tracking of where they appear.

For Whom the Bell Tolls: Theme Wheel

An interactive data visualization of For Whom the Bell Tolls's plot and themes.

Ernest Hemingway was born in Oak Park, a suburb outside of Chicago, where he was raised in a wealthy, educated family and harbored dreams of becoming a journalist. In 1918, shortly after the advent of World War I, Hemingway traveled to Italy to become a volunteer ambulance driver, joining a cohort of American artists—including E. E. Cummings, John Dos Passos, and Gertrude Stein—who identified with the Allied Powers’ cause but, for reasons of gender or age, could not participate in combat. Hemingway was wounded by mortar fire after bringing goods to Italian soldiers at the front line and returned home to Michigan thereafter, using his experiences with shell shock as a basis for one of his most famous characters, the soldier Nick Adams, a wounded soldier who finds solitude in the Michigan countryside after war in the short story “Big Two-Hearted River.” Hemingway returned to Europe and settled in Paris with his first wife, Hadley, in 1921, eager to start over in a city famous for its communities of expatriate artists. After years in Paris, where he enjoyed celebrity among the expatriates, and the publication of his first novel, The Sun Also Rises, in 1926, Hemingway went on to Key West, Wyoming, and the Caribbean. In 1937, Hemingway traveled to Spain to report on the Spanish Civil War, where he gathered material for the novel For Whom the Bell Tolls as well as his only play, The Fifth Column. In Spain, Hemingway witnessed the Battle of the Ebro, where the Republicans suffered a disastrous defeat at the hands of the Francoist Nationalist forces. After a stint in Paris, where he witnessed the city’s liberation from Nazi control, Hemingway took up residence in Cuba. He won the Pulitzer Prize in 1952 for his novel The Sun Also Rises and the Noble Prize in Literature in 1954 and retired to Idaho, where he died in 1961 by suicide.
Get the entire For Whom the Bell Tolls LitChart as a printable PDF.
"My students can't get enough of your charts and their results have gone through the roof." -Graham S.
Download 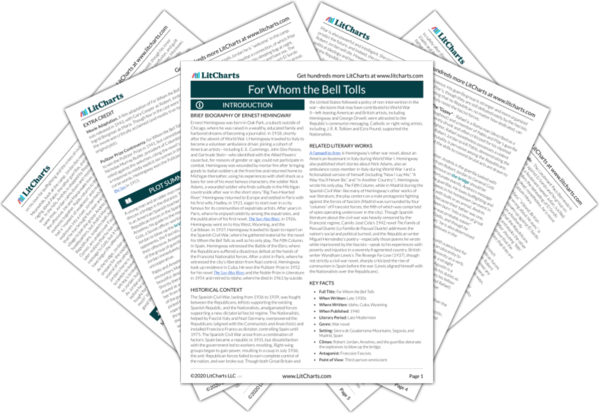 Historical Context of For Whom the Bell Tolls

The Spanish Civil War, lasting from 1936 to 1939, was fought between the Republicans, leftists supporting the existing Spanish Republic, and the Nationalists, amalgamated forces supporting a new, dictatorial fascist regime. The Nationalists, helped by Fascist Italy and Nazi Germany, overpowered the Republicans (aligned with the Communists and Anarchists) and installed Francisco Franco as dictator, controlling Spain until 1975. The Spanish Civil War arose from a combination of factors: Spain became a republic in 1931, but dissatisfaction with the government led to workers revolting. Right-wing groups began to gain power, resulting in a coup in July 1936; the anti-Republican forces failed to earn complete control of the nation, and war broke out. Though both Great Britain and the United States followed a policy of non-intervention in the war—decisions that may have contributed to World War II—left-leaning American and British artists, including Hemingway and George Orwell, were attracted to the Republic’s communist messaging. Catholic or right-wing artists, including J. R. R. Tolkien and Ezra Pound, supported the Nationalists.

Other Books Related to For Whom the Bell Tolls

A Farewell to Arms is Hemingway’s other war novel, about an American lieutenant in Italy during World War I. Hemingway also published short stories about Nick Adams, also an ambulance corps member in Italy during World War I and a fictionalized version of himself (including “Now I Lay Me,” “A Way You’ll Never Be,” and “In Another Country”). Hemingway wrote his only play, The Fifth Column, while in Madrid during the Spanish Civil War: like many of Hemingway’s other works of war literature, the play centers on a male protagonist fighting against the forces of fascism (Madrid was surrounded by four “columns” of Francoist forces, the fifth of which was comprised of spies operating undercover in the city). Though Spanish literature about the civil war was heavily censored by the Francoist regime, Camilo José Cela’s 1942 novel The Family of Pascual Duarte (La Familia de Pascual Duarte) addresses the nation’s social and political turmoil, and the Republican writer Miguel Hernández’s poetry—especially those poems he wrote while imprisoned by the fascists—speak to his experiences with poverty and injustice in a severely fragmented country. British writer Wyndham Lewis’s The Revenge For Love (1937), though not strictly a civil war novel, sharply criticized the rise of communism in Spain before the war (Lewis aligned himself with the Nationalists over the Republicans).
Key Facts about For Whom the Bell Tolls

Extra Credit for For Whom the Bell Tolls

Movie Adaptation. A film adaptation of For Whom the Bell Tolls was released in 1943, with Gary Cooper as Robert Jordan and Ingrid Bergman as Maria. Though few in the cast were Spanish, the movie was critically acclaimed (and mostly true to the original plot).

Pulitzer Prize Controversy. For Whom the Bell Tolls was slated to win the Pulitzer Prize in 1941, but committee member Nicholas Murray Butler, president of Columbia University, voted against the selection, citing the novel’s “obscenity”—likely a response to mildly explicit sex scenes in the novel and Spanish curse words. Hemingway won the Pulitzer for The Old Man and the Sea in 1953. 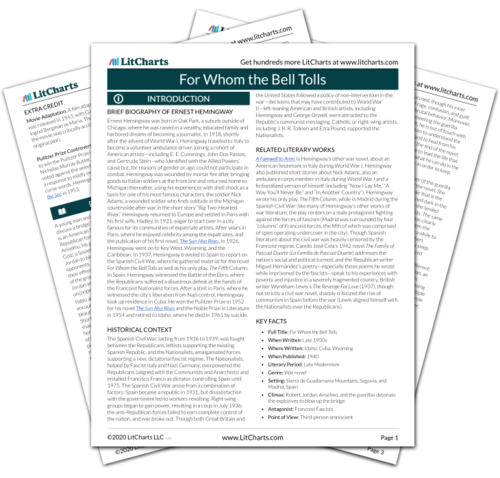 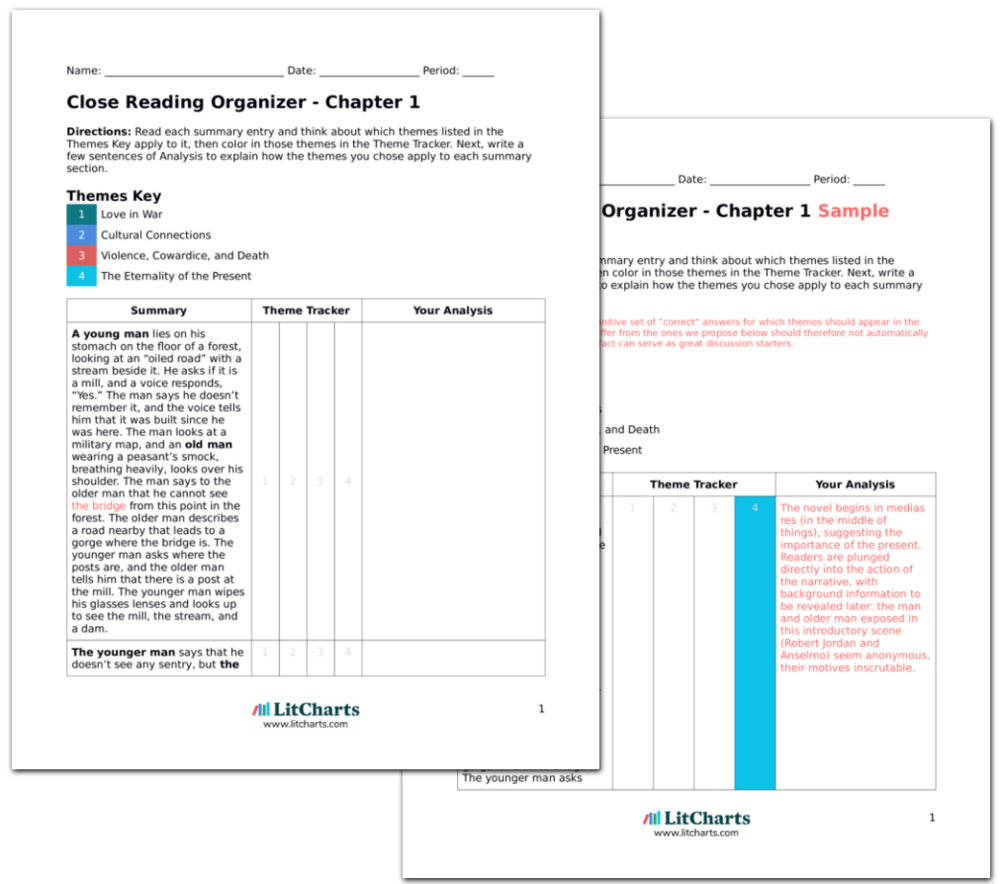