Download this LitChart! (PDF)
Teachers and parents! Struggling with distance learning? Our Teacher Edition on Freak the Mighty can help.

Welcome to the LitCharts study guide on Rodman Philbrick's Freak the Mighty. Created by the original team behind SparkNotes, LitCharts are the world's best literature guides.

A concise biography of Rodman Philbrick plus historical and literary context for Freak the Mighty.

A quick-reference summary: Freak the Mighty on a single page.

In-depth summary and analysis of every chapter of Freak the Mighty. Visual theme-tracking, too.

Explanations, analysis, and visualizations of Freak the Mighty's themes.

Description, analysis, and timelines for Freak the Mighty's characters.

Description, analysis, and timelines for Freak the Mighty's terms.

Explanations of Freak the Mighty's symbols, and tracking of where they appear.

An interactive data visualization of Freak the Mighty's plot and themes.

Philbrick was born in Boston, Massachusetts but he grew up in New Hampshire. He was an avid daydreamer and writer as a child; he began writing stories around age 12 and completed a novel-length work at age 16. Though Philbrick attended the University of New Hampshire and studied English, he never finished college. As a young man, Philbrick worked for a time as a boat builder and a longshoreman, which inspired his 2004 young adult novel The Young Man and the Sea. Though he began his writing career as a mystery and suspense author for adults, his fame skyrocketed when he published Freak the Mighty, his first young adult novel, in 1993. Since then, Philbrick’s young adult novels have been his most critically and commercially successful works. He collaborated on several series for young adults with his wife, Lynn Harnett, who died in 2012. When Philbrick isn’t writing, he spends his time fishing in both Maine and Florida.
Get the entire Freak the Mighty LitChart as a printable PDF.
"My students can't get enough of your charts and their results have gone through the roof." -Graham S.
Download 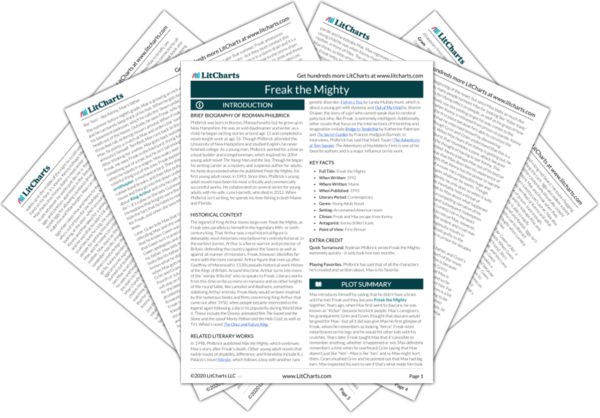 Historical Context of Freak the Mighty

The legend of King Arthur looms large over Freak the Mighty, as Freak sees parallels to himself in the legendary fifth- or sixth-century king. That Arthur was a real historical figure is debatable; most historians now believe he’s entirely fictional. In the earliest stories, Arthur is a fierce warrior and protector of Britain, defending the country against the Saxons as well as against all manner of monsters. Freak, however, identifies far more with the more romantic Arthur figure that rose up after Geoffrey of Monmouth’s 1130s pseudo-historical work History of the Kings of Britain. Around this time, Arthur turns into more of the “wimpy little kid” who so speaks to Freak. Literary works from this time on focus more on romance and on other knights of the round table, like Lancelot and Bedivere, sometimes sidelining Arthur entirely. Freak likely would’ve been inspired by the numerous books and films concerning King Arthur that came out after 1950, when people became interested in the legend again following a dip in its popularity during World War II. These include the Disney animated film The Sword and the Stone and the spoof Monty Python and the Holy Grail, as well as T.H. White’s novel The Once and Future King.

Other Books Related to Freak the Mighty

In 1998, Philbrick published Max the Mighty, which continues Max’s story after Freak’s death. Other young adult novels that tackle issues of disability, difference, and friendship include R.J. Palacio’s novel Wonder, which follows a boy with another rare genetic disorder; Fish in a Tree by Lynda Mullaly Hunt, which is about a young girl with dyslexia; and Out of My Mind by Sharon Draper, the story of a girl who cannot speak due to cerebral palsy but who, like Freak, is extremely intelligent. Additionally, other novels that focus on the intersections of friendship and imagination include Bridge to Terabithia by Katherine Paterson and The Secret Garden by Frances Hodgson Burnett. In interviews, Philbrick has said that Mark Twain (The Adventures of Tom Sawyer; The Adventures of Huckleberry Finn) is one of his favorite authors and is a major influence on his work.
Key Facts about Freak the Mighty

Extra Credit for Freak the Mighty

Playing Favorites. Philbrick has said that of all the characters he’s created and written about, Max is his favorite. 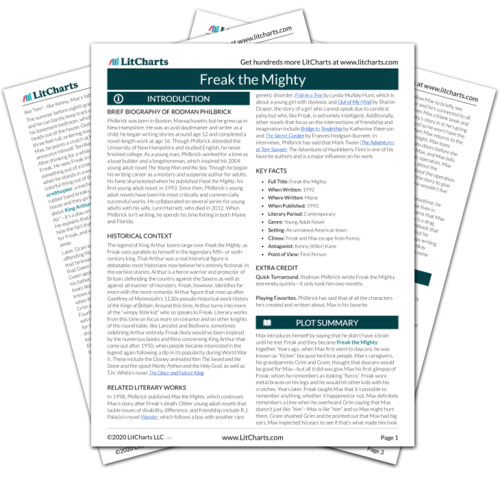 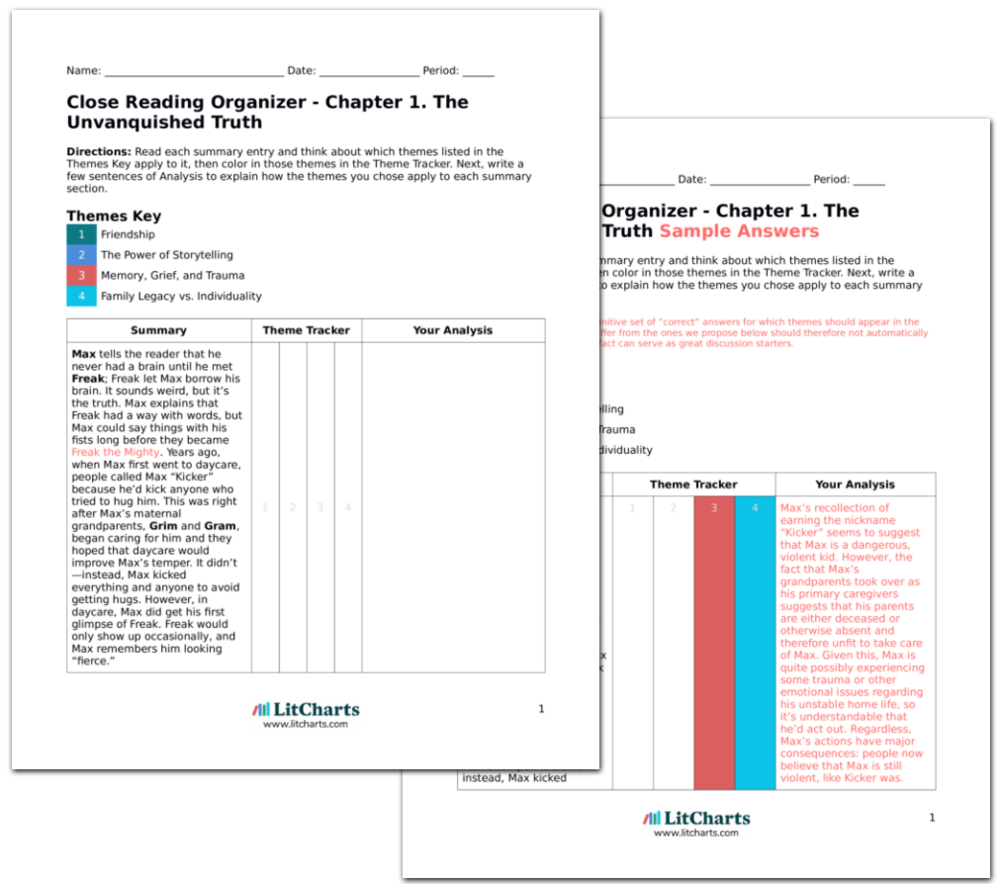