Download this LitChart! (PDF)
Teachers and parents! Struggling with distance learning? Our Teacher Edition on Garbology can help.

Welcome to the LitCharts study guide on Edward Humes's Garbology. Created by the original team behind SparkNotes, LitCharts are the world's best literature guides.

A concise biography of Edward Humes plus historical and literary context for Garbology.

A quick-reference summary: Garbology on a single page.

In-depth summary and analysis of every chapter of Garbology. Visual theme-tracking, too.

Explanations of Garbology's symbols, and tracking of where they appear.

An interactive data visualization of Garbology's plot and themes.

Born in Philadelphia, Pennsylvania, and educated at Hampshire College in Amherst, Massachusetts, Edward Humes began his career as a newspaper journalist. In 1989, he won a Pulitzer Prize for beat reporting, and within a few years, he transitioned from focusing on newspaper journalism to focusing on book-length nonfiction. Some of his most noteworthy titles include Garbology, Mississippi Mud, No Matter How Loud I Shout, A Man and His Mountain, and Beyond the Snitch Tank. His books span a wide range of topics, with a particular focus on true crime and, more recently, sustainability. They have also received awards and been frequently included on books-of-the-year lists. Humes currently lives in Southern California with his wife, Donna Wares, who is also a journalist and author.
Get the entire Garbology LitChart as a printable PDF.
"My students can't get enough of your charts and their results have gone through the roof." -Graham S.
Download 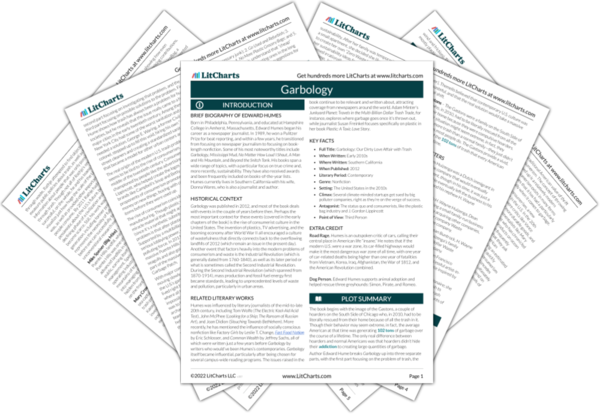 Garbology was published in 2012, and most of the book deals with events in the couple of years before then. Perhaps the most important context for these events (covered in the early chapters of the book) is the rise of consumerist culture in the United States. The invention of plastics, TV advertising, and the booming economy after World War II all encouraged a culture of wastefulness that directly connects back to the overflowing landfills of 2012 (which remain an issue in the present day). Another event that factors heavily into the modern problems of consumerism and waste is the Industrial Revolution (which is generally dated from 1760-1840), as well as its later period or what is sometimes called the Second Industrial Revolution. During the Second Industrial Revolution (which spanned from 1870-1914), mass production and fossil fuel energy first became standards, leading to unprecedented levels of waste and pollution, particularly in urban areas.

Other Books Related to Garbology

Humes was influenced by literary journalists of the mid-to-late 20th century, including Tom Wolfe (The Electric Kool-Aid Acid Test), John McPhee (Looking for a Ship; The Ransom of Russian Art), and Joan Didion (Slouching Towards Bethlehem). More recently, he has mentioned the influence of socially conscious nonfiction like Factory Girls by Leslie T. Change, Fast Food Nation by Eric Schlosser, and Common Wealth by Jeffrey Sachs, all of which were written just a few years before Garbology by writers who would’ve been Humes’s contemporaries. Garbology itself became influential, particularly after being chosen for several campus-wide reading programs. The issues raised in the book continue to be relevant and written about, attracting coverage from newspapers around the world. Adam Minter’s Junkyard Planet: Travels in the Multi-Billion Dollar Trash Trade, for instance, explores where garbage goes once it’s thrown out, while journalist Susan Freinkel focuses specifically on plastic in her book Plastic: A Toxic Love Story.
Key Facts about Garbology

Road Rage. Humes is an outspoken critic of cars, calling their central place in American life “insane.” He notes that if the modern U.S. were a war zone, its car-filled highways would make it the most dangerous war zone of all time, with one year of car-related deaths being higher than one year of fatalities from Vietnam, Korea, Iraq, Afghanistan, the War of 1812, and the American Revolution combined. 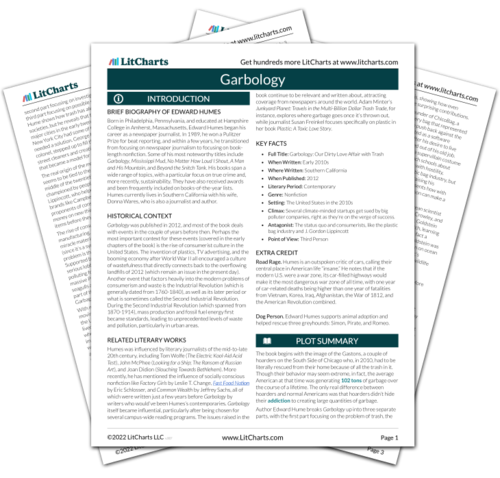 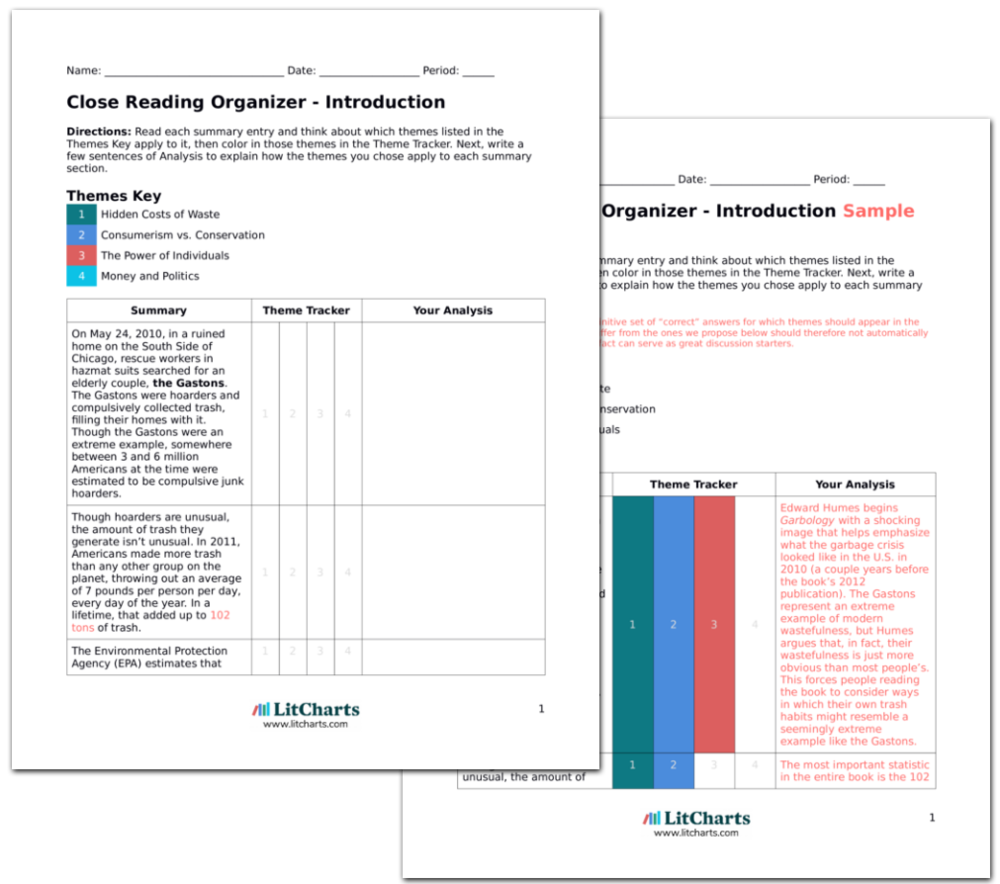