Download this LitChart! (PDF)
Teachers and parents! Struggling with distance learning? Our Teacher Edition on Herland can help.

Welcome to the LitCharts study guide on Charlotte Perkins Gilman's Herland. Created by the original team behind SparkNotes, LitCharts are the world's best literature guides.

A concise biography of Charlotte Perkins Gilman plus historical and literary context for Herland.

A quick-reference summary: Herland on a single page.

In-depth summary and analysis of every chapter of Herland. Visual theme-tracking, too.

Explanations of Herland's symbols, and tracking of where they appear.

An interactive data visualization of Herland's plot and themes.

Charlotte Perkins Gilman was born on July 3, 1860 in Hartford, Connecticut. Charlotte’s father, Frederic Beecher Perkins, abandoned her, her mother, and her older brother when Charlotte was very young, leaving the family impoverished. Still, Charlotte was able to go to school sporadically and enjoyed spending her free time in the local library. When Charlotte was 24, she married Charles Walter Stetson and the two had their only child, Katharine Beecher Stetson, the next year. Following Katharine’s birth, Charlotte entered a deep depression and was given the infamous “rest cure” that would inspire her famous short story “The Yellow Wallpaper.” Eventually, Charlotte took the unusual step of separating from her husband, ultimately divorcing him in 1894. Charlotte and her daughter moved to Pasadena, California, but Charlotte sent Katharine back to Charles when he married his second wife. In Pasadena, Charlotte became involved women’s rights activism, which can be felt throughout many of her fictional works. After living in Pasadena for several years, Charlotte moved back east. She met her cousin, Houghton Gilman, and the two married in 1900. They never had children together and, in 1922, Houghton died suddenly. After Houghton’s death, Gilman moved back to Pasadena, where her daughter was living. Gilman continued to write until 1935 when a doctor diagnosed her with incurable breast cancer. Bereft and unwilling to endure the pain late-stage cancer would cause, Charlotte chose to end her life by suicide several months later, on August 17, 1935.
Get the entire Herland LitChart as a printable PDF.
"My students can't get enough of your charts and their results have gone through the roof." -Graham S.
Download 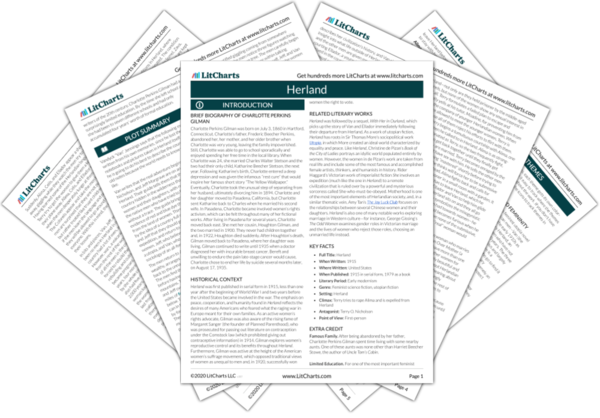 Herland was first published in serial form in 1915, less than one year after the beginning of World War I and two years before the United States became involved in the war. The emphasis on peace, cooperation, and humanity found in Herland reflects the desires of many Americans who feared what the raging war in Europe meant for their own families. As an active women’s rights advocate, Gilman was also aware of the rising fame of Margaret Sanger (the founder of Planned Parenthood), who was prosecuted for passing out literature on contraception under the Comstock law (which prohibited giving out contraceptive information) in 1914. Gilman explores women’s reproductive control and its benefits throughout Herland. Furthermore, Gilman was active at the height of the American women’s suffrage movement, which opposed traditional views of women as unequal to men and, in 1920, successfully won women the right to vote.

Other Books Related to Herland

Herland was followed by a sequel, With Her in Ourland, which picks up the story of Van and Ellador immediately following their departure from Herland. As a work of utopian fiction, Herland has roots in Sir Thomas More’s sociopolitical work Utopia, in which More created an ideal world characterized by equality and peace. Like Herland, Christine de Pizan’s Book of the City of Ladies portrays an idyllic world populated entirely by women. However, the women in de Pizan’s work are taken from real life and include some of the most famous and accomplished female artists, thinkers, and humanists in history. Rider Haggard’s Victorian work of imperialist fiction She involves an expedition (much like the one in Herland) to a remote civilization that is ruled over by a powerful and mysterious sorceress called She-who-must-be-obeyed. Motherhood is one of the most important elements of Herlandian society, and, in a similar thematic vein, Amy Tan’s The Joy Luck Club focuses on the relationships between several Chinese women and their daughters. Herland is also one of many notable works exploring marriage in Western culture—for instance, George Gissing’s The Odd Women examines gender roles in Victorian marriage and the lives of women who reject those roles, choosing an unmarried life instead.
Key Facts about Herland

Famous Family. After being abandoned by her father, Charlotte Perkins Gilman spent time living with some nearby aunts. One of these aunts was none other than Harriet Beecher Stowe, the author of Uncle Tom’s Cabin.

Limited Education. For one of the most important feminist writers of the 20th century, Charlotte Perkins Gilman had a surprisingly limited education. By the time she left school at 15, she had been to seven different schools and had only accumulated four years’ worth of formal education. 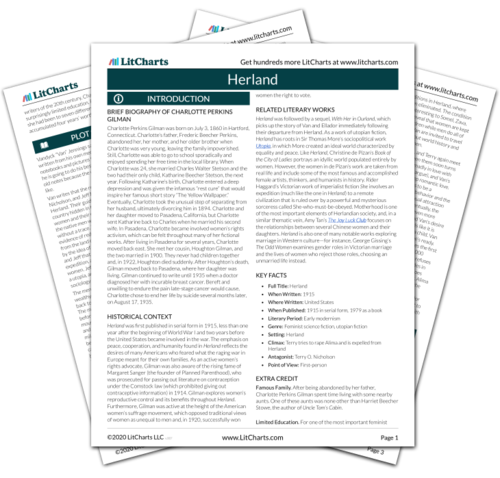 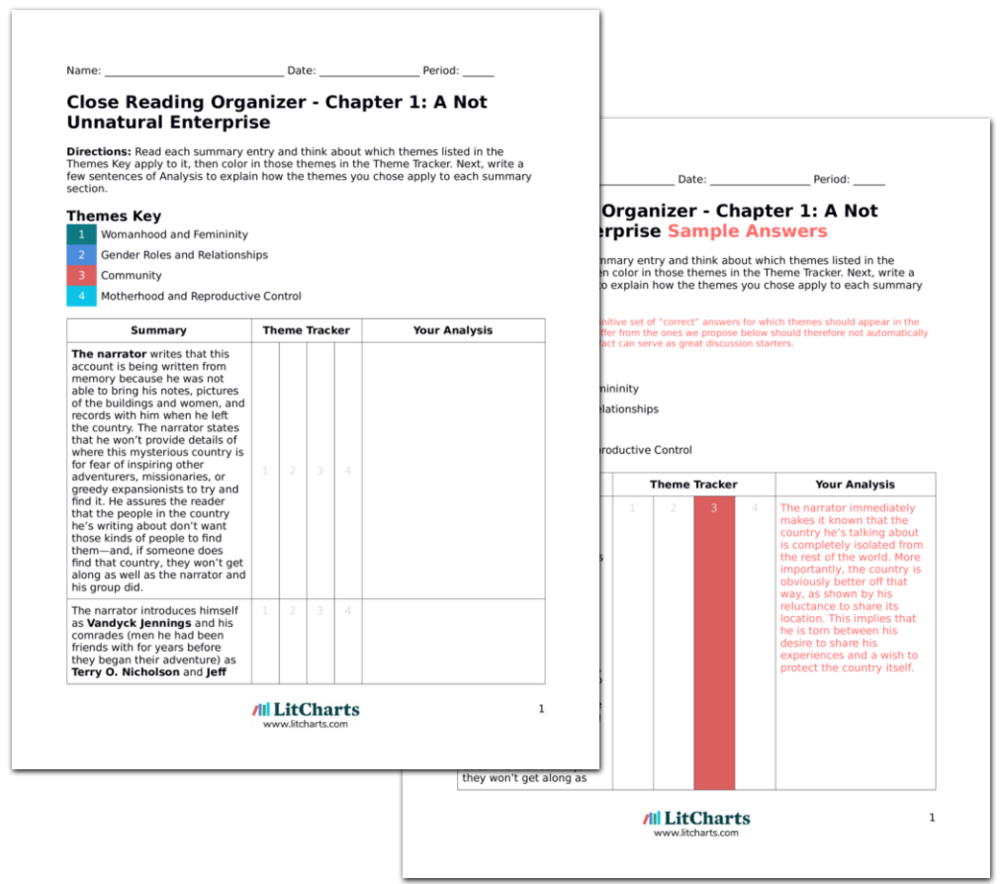