Get LitCharts A+
LitCharts assigns a color and icon to each theme in Homage to Catalonia, which you can use to track the themes throughout the work.

Orwell goes to Spain because he believes it is his duty to fight the rise of Fascism in Europe. When he arrives in Barcelona, he is fascinated to discover that a social revolution is underway and he supports the attempt to build a democratic society with neither poverty nor class divisions. While he initially finds the political climate in Spain inspiring and believes that he is living in a society that has made social equality a reality, Orwell comes to realize that his rosy initial impression of the socialist revolution was simplistic and naïve. Although Orwell never ceases to believe in socialist ideals, he comes to doubt that people could truly come to embody such ideals in their daily lives.

Upon his arrival in Barcelona, Orwell has a naïve and idealistic impression of the city as a perfect example of social equality. Everyone is wearing working-class dress, treating each other as equals, and using the informal pronoun “tú.” Revolutionary songs are playing everywhere. Orwell sees no poverty and notices that everyone seems hopeful and satisfied. He is convinced that this is a situation of perfect equality and freedom, a model for what the results of a successful socialist revolution could be. Similarly, Orwell’s initial experience as part of the Marxist (or “POUM”) militia leads him to believe that an egalitarian militia bonded by political passion rather than military hierarchy can be effective in battle. The POUM militia is organized without barriers of rank, so all members of the militia treat each other as equals. In fact, men who disagree with orders are even allowed to argue with their officers. Orwell is originally shocked by this, since he sees it as a potentially chaotic or ineffectual way to organize troops. However, Orwell quickly comes to admire the militia. An equalitarian system of this sort, he argues, instills an uncommon sense of loyalty in its members, who are bonded by a belief in the principles of democracy and a feeling of comradeship. Rather than obeying orders out of fear, revolutionary soldiers act out of personal conviction, making them less likely to desert their post and abandon the cause.

As the war drags on, Orwell realizes that his initial ideas about Barcelona and the militia were far too idealistic. After fighting for three and a half months, Orwell returns to Barcelona to find that the social climate has changed, with the working class no longer seeming to dominate the city. He realizes that class divisions had never actually disappeared. Rather, many upper-class members of society were cultivating a working-class appearance to fit in and keep themselves safe from political violence against the wealthy. As Barcelona lost its revolutionary spirit, the city returned to the status quo in which poverty and class divisions were not only present, but palpable. Orwell also reconsiders his rosy initial assessment of the militia in light of the fact that fighting for revolution failed. He acknowledges that, while the revolutionary militias may have been useful at the beginning of the conflict, a more efficient and well-organized military might have handled the complexity of warfare more successfully overall.

Although Spain’s attempts at political revolution failed, Orwell does see flashes of possibility for success during his time there, as well as reasons to be cautious about believing in the possibility of revolution. He remarks that social equality seemed most like an attainable goal at the front, where soldiers were united in their life-and-death fight against a common enemy. He describes interpersonal interactions at the front as being characterized by respect and feelings of comradeship, which suggests that political strife can foster the conditions of equality by moving people to act in defense of their shared beliefs. However, a society cannot flourish if it is constantly under siege, and in places like Barcelona that were removed from any actual fighting, civilians quickly lost sight of the revolutionary ideals that made war necessary. Class hierarchies re-emerged, and civilians went back to focusing on their daily lives and waited for the war to be over. People lose sight of their political ideals in the mix of practical concerns and everyday life, Orwell suggests—a fact which makes staging a successful socialist revolution extremely difficult, if not impossible.

The Possibility of Revolution ThemeTracker 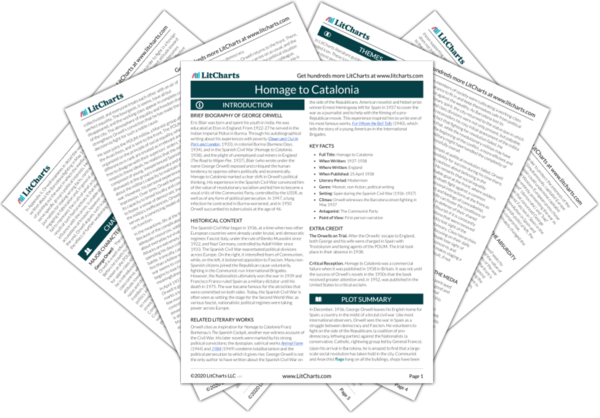 The Possibility of Revolution Quotes in Homage to Catalonia

Below you will find the important quotes in Homage to Catalonia related to the theme of The Possibility of Revolution .
Chapter 1 Quotes

Above all, there was a belief in the revolution and the future, a feeling of having suddenly emerged into an era of equality and freedom. Human beings were trying to behave as human beings and not as cogs in the capitalist machine. In the barbers’ shop were Anarchist notices (the barbers were mostly Anarchists) solemnly explaining that barbers were no longer slaves. In the streets were coloured posters appealing to prostitutes to stop being prostitutes. To anyone from the hard-boiled, sneering civilization of the English-speaking races there was something rather pathetic in the literalness with which these idealistic Spaniards took the hackneyed phrases of revolution.

In theory at any rate each militia was a democracy and not a hierarchy. It was understood that orders had to be obeyed, but it was also understood that when you gave an order you gave it as comrade to comrade and not as superior to inferior. There were officers and NCOs, but there was no military rank in the ordinary sense; no titles, no badges, no heel-clicking and saluting. They had attempted to produce within the militias a sort of temporary working model of the classless society. Of course there was not perfect equality, but there was a nearer approach to it than I had ever seen or than I would have thought conceivable in time of war.

The workers’ militias, based on the trade unions and each composed of people of approximately the same political opinions, had the effect of canalizing into one place all the most revolutionary sentiment in the country. I had dropped more or less by chance into the only community of any size in Western Europe where political consciousness and disbelief in capitalism were more normal than their opposites. Up here in Aragón one was among tens of thousands of people, mainly though not entirely of working-class origin, all living at the same level and mingling on terms of equality. […] Of course such a state of affairs could not last. It was simply a temporary and local phase in an enormous game that is being played over the whole surface of the earth. But it lasted long enough to have its effect upon anyone who experienced it.

It was queer how everything had changed. Only six months ago, when the Anarchists still reigned, it was looking like a proletarian that made you respectable. On the way down from Perpignan to Cerbères a French commercial traveller in my carriage had said to me in all solemnity: ‘You mustn't go into Spain looking like that. Take off that collar and tie. They'll tear them off you in Barcelona.’ He was exaggerating, but it showed how Catalonia was regarded. And at the frontier the Anarchist guards had turned back a smartly-dressed Frenchman and his wife, solely – I think – because they looked too bourgeois. Now it was the other way about; to look bourgeois was the one salvation.