Download this LitChart! (PDF)
Teachers and parents! Struggling with distance learning? Our Teacher Edition on Howl’s Moving Castle can help.

A concise biography of Diana Wynne Jones plus historical and literary context for Howl’s Moving Castle.

A quick-reference summary: Howl’s Moving Castle on a single page.

In-depth summary and analysis of every chapter of Howl’s Moving Castle. Visual theme-tracking, too.

Explanations of Howl’s Moving Castle's symbols, and tracking of where they appear.

Jones was born in London, England, the first child of two schoolteachers. However, her parents were neglectful—so to help her younger sisters cope, Jones began writing stories as a young child. She went on to study English at St. Anne’s College, where both C. S. Lewis and J. R. R. Tolkien lectured. The same year she graduated, Jones married her husband, a scholar of medieval literature. Around the time her third child was born, Jones began writing, first plays, then an adult novel, and finally, children’s and young adult novels. She went on to publish nearly a book per year until her death. Jones is best known for her fantasy books for young readers, particularly for Howl’s Moving Castle, the Chronicles of Chrestomanci series, and her tongue-in-cheek exploration of fantasy tropes, The Tough Guide to Fantasyland. Despite publishing prolifically, Jones never became a household name, and by the 1990s, several of her novels were out of print. However, they were revived and republished once J. K. Rowling’s Harry Potter books spurred a new push for children’s fantasy. Following this her profile rose throughout the 2000s, particularly after Japanese filmmaker Hayao Miyazaki adapted Howl’s Moving Castle into a critically acclaimed animated film in 2004. Jones continued to write and publish up until her death in 2011 of lung cancer. Her sister Ursula Jones, who’s also a children’s author, finished the novel Jones was writing when she died, The Islands of Chaldea, in 2014.
Get the entire Howl’s Moving Castle LitChart as a printable PDF.
"My students can't get enough of your charts and their results have gone through the roof." -Graham S.
Download 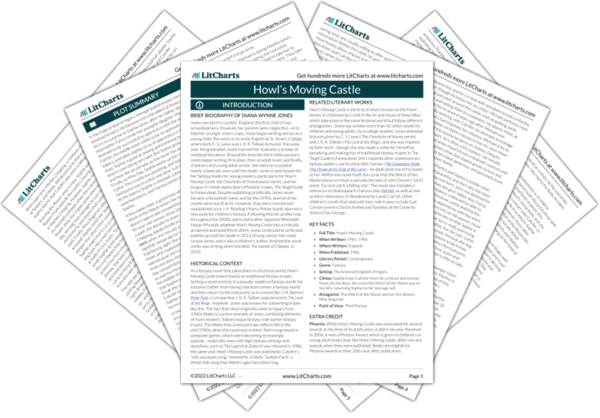 As a fantasy novel that takes place in a fictional world, Howl’s Moving Castle draws heavily on traditional fantasy tropes. Setting a novel entirely in a pseudo-medieval fantasy world, for instance (rather than having characters enter a fantasy world and then return to the real world, as in a novel like J. M. Barrie’s Peter Pan), is a trope that J. R. R. Tolkien popularized in The Lord of the Rings. However, Jones was known for subverting tropes like this. The fact that Howl originally came to Ingary from 1980s Wales is a prime example of Jones combining elements of more modern, Tolkien-esque fantasy with earlier fantasy tropes. The Wales that Jones portrays reflects life in the mid-1980s, when the novel was written. Neil is engrossed in computer games, which were becoming increasingly popular—especially ones with high fantasy settings and storylines, such as The Legend of Zelda (it was released in 1986, the same year Howl’s Moving Castle was published). Calcifer’s “silly saucepan song,” meanwhile, is likely “Sosban Fach,” a Welsh folk song that Welsh rugby fans often sing.

Howl’s Moving Castle is the first of what’s known as the Howl Series; it’s followed by Castle in the Air and House of Many Ways, which take place in the same fictional world but follow different protagonists. Jones has written more than 40 other novels for children and young adults. As a college student, Jones attended lectures given by C. S. Lewis (The Chronicles of Narnia series) and J. R. R. Tolkien (The Lord of the Rings), and she was inspired by their work—though she also made a name for herself by parodying and making fun of traditional fantasy tropes in The Tough Guide to Fantasyland. She’s inspired other contemporary fantasy authors, particularly Neil Gaiman (The Graveyard Book, The Ocean at the End of the Lane)—he dedicated one of his books to her. Within the novel itself, the curse that the Witch of the Waste places on Howl is actually the text of John Donne’s 1633 poem “Go and catch a falling star.” The novel also includes a reference to Shakespeare’s famous play Hamlet, as well as one to Alice’s Adventures in Wonderland by Lewis Carroll. Other children’s novels that deal with fairy-tale tropes include Gail Carson Levine’s Ella Enchanted and Tuesdays at the Castle by Jessica Day George.
Key Facts about Howl’s Moving Castle 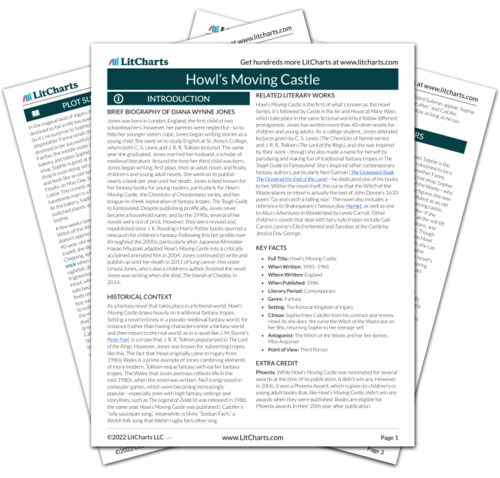 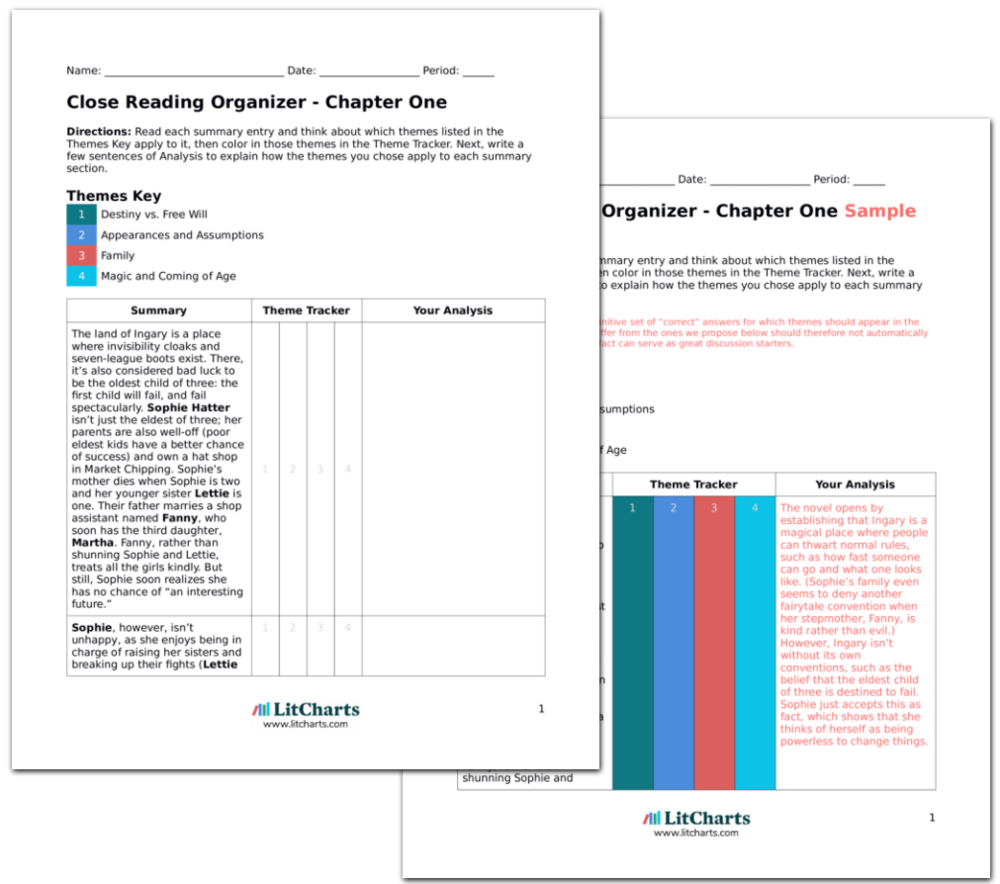