The year is 1976—one year after a deadly plague sweeps the world, killing virtually all human beings. After their deaths, the world’s human beings rise from the grave and become vampires: sensitive to light, garlic, and mirrors, dormant during the day, and impervious to bullets. In the city of Los Angeles, a man named Robert Neville has managed to survive by converting his house into a fortress. Every day, he travels across the city, impaling sleeping vampires with wooden stakes, and every night, he barricades himself in his house to hide from the vampires (who only come out in the dark). All night, Neville hears the sound of his old friend and neighbor, Ben Cortman—now a vampire—shouting, “Come out, Neville!”

Neville has several close calls with the vampires. One evening, his watch stops, so that he’s forced to drive home after sunset and fight past Ben Cortman and the other vampires. Neville narrowly manages to return to his house alive. Afterwards, he drinks heavily and falls into depression.

In flashbacks, we learn that Neville has been devastated by the death of his wife, Virginia Neville, and his daughter, Kathy Neville. In 1975, the year of the plague, there were widespread reports of dust storms and genetically mutated bugs and insects that spread the plague across the world. The government instituted a law that all victims of the plague be burned in a huge pit; after the death of his daughter, Neville followed this rule. However, when Virginia died, Neville couldn't bear to burn the body; instead, he dragged it to a cemetery and buried it underground. To his horror, Virginia rose from the dead and walked back to the house—afterwards, it’s strongly implied, Neville was forced to “kill” his vampire wife for a second time.

In an effort to stave off his depression and loneliness, Neville tries to learn about the vampires. During the day, he kidnaps sleeping vampires from their hiding places, and takes them back to his house. There, he waits for them to wake up, and then dangles crosses in front of their faces—he finds that some, but not all, of the vampires are repulsed by the sight of a cross. Neville also learns that it’s possible to kill vampires by piercing their bodies anywhere—it doesn’t have to be the heart, contrary to folklore. Neville also tries to kill vampires by injecting them with allyl sulphide, the pungent chemical found in garlic. However, the allyl sulphide fails to provoke any reaction in the vampires he tests. Neville manages to isolate the vampire germ: he does this by teaching himself about medicine, extracting blood from vampires as they sleep, and looking at the blood under a microscope. Finally, Neville realizes that there are two distinct kinds of vampires: living vampires and the “true undead.” The former kind of vampire is a human being who’s currently suffering from the vampire plague, but who still has some control over their own mind; the latter kind is a corpse that has risen from the grave, and is now wild and feral.

One day, Neville discovers that there’s a live dog outside his house. The dog appears to be infected with the vampire germ; however, it can still walk around in the sunlight. Neville, desperate for companionship of any kind, feeds the dog hamburger meat, and tries to convince the dog to live in his house. However, the dog seems to be frightened of Neville. Over time, the dog becomes more and more sick with the vampire germ, until, one day, it dies.

Neville resists the temptation to drink heavily after the dog’s death. Instead, he throws himself into his research. He hypothesizes that some vampires are frightened of crosses because the cross reminds them of their former, Christian lives. However, vampires who were Jewish or atheist in life may not be afraid of the cross at all.

The novel then jumps ahead two years: it’s now 1978, and Neville has become more confortable in his new life. He spends his days hunting the neighborhood for Ben Cortman’s sleeping body—indeed, the hunt for Cortman is the best part of Neville’s life.

One day, Neville is shocked to discover a woman running through the streets. The woman is initially reluctant to stop and talk to Neville, but eventually she agrees to go back to his house. At home, Neville learns that the woman is named Ruth, and that she lived with her husband until her husband died the previous week. Neville is highly skeptical of Ruth—he’s suspicious that she’s infected with the vampire germ, since Ruth is disgusted by the smell of garlic.

During his time with Ruth, Neville tells her some things he’s learned in the past two years. He’s learned that vampires are immune to gunfire, because the vampire germ creates a “powerful body glue” that can absorb bullets. He also tells Ruth that he’s immune to the vampire germ, probably because he was bitten by a vampire bat during his time fighting in Panama. Neville explains that he spends his days killing vampires in their sleep, and Ruth asks him how Neville can be so laid-back about killing them. Neville, in spite of himself, begins to feel guilty. That night, it’s implied, he and Ruth sleep together.

Neville insists on testing Ruth’s blood; he does so, and immediately sees that she’s heavily infected with the vampire germ. But as he looks into the microscope, Ruth knocks him out and leaves the house. When Neville comes to, he finds that Ruth has left him a note, explaining that she’s a member of a “new society” of living vampires: vampires who haven’t yet succumbed to the ravages of the germ, but who take special pills to stave off the germ’s effects. Neville killed Ruth’s husband, also a living vampire, in his sleep. Ruth further explains that her fellow vampires sent her to spy on Neville; however, she decided not to hurt Neville after she fell in love with him.

Neville wakes up in a cell, with Ruth next to him. Ruth explains that the new society vampires are going to execute Neville: in their eyes, Neville is a horrifying monster who has mercilessly killed their kind for the last three years. She offers Neville some poison capsules to make his execution less painful. Neville takes the capsules and walks out of his cell, toward the new society vampires, who are about to kill him. As he faces death from the poison, Neville realizes the truth: although he’s spent the last three years fearing vampires and thinking of them as hideous monsters, he is the monster to them. Neville has devoted his existence to killing the living vampires: from their perspective, he is the danger, the monster, and the “legend.” 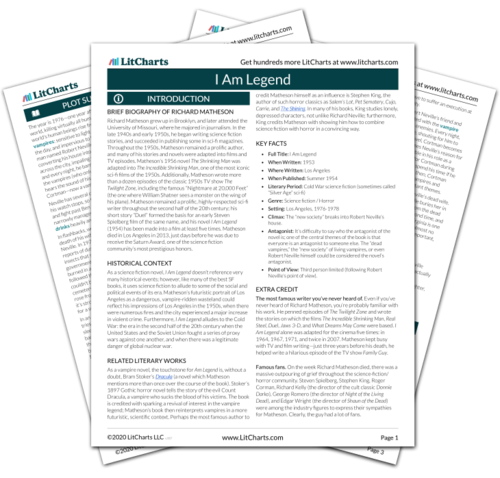 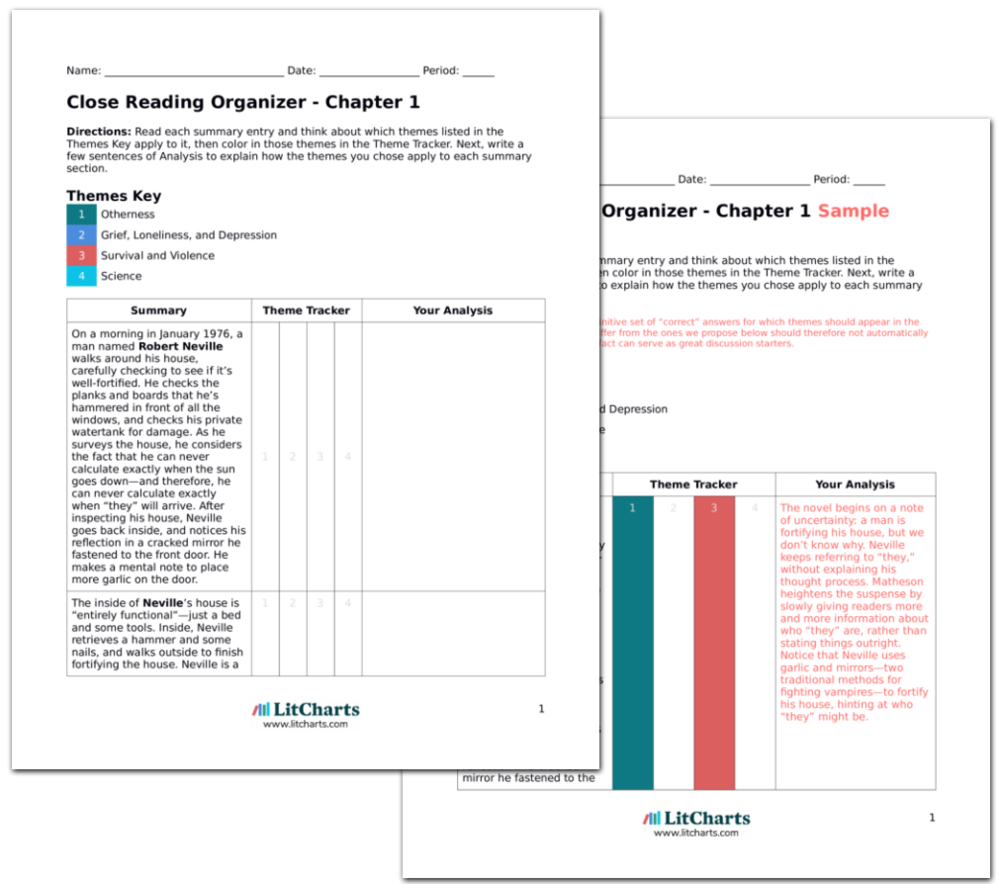