Ten-year-old Hà lives in Vietnam with Mother and her three brothers: Brother Quang, who’s studying engineering at college; Brother Vū, who idolizes Bruce Lee; and Brother Khôi, who loves animals. Hà loves her papaya tree in the backyard, which is just starting to produce baby papayas. Though soldiers patrol Hà’s neighborhood, and food has been getting expensive over the last few months, Hà still delights in sneakily buying herself treats when Mother sends her to the market. The only real sad part of Hà’s life is that Father has been missing in action for nine years. He was in the navy, and nobody knows if he’s dead or a prisoner of war. Mother constantly worries about him.

In 1975 on Tet, the lunar new year, the war is clearly getting closer, and a fortuneteller warns Mother that the family’s year is going to “twist inside out.” Hà, annoyed with what she perceives as the sexist tradition of requiring a man to bless the house for the new year, sneakily touches the floor before anyone else is awake, thereby blessing it herself.

Over the next few months, Hà watches her papayas ripen and celebrates her birthday. But things take a turn for the worse when school closes a month early, and Father’s best friend, Uncle Son, starts to speak to Mother about escaping the country on navy ships. Around this time, Brother Khôi manages to hatch one of his chicken’s eggs. Soon, President Thieu resigns. The family will have to escape soon, as the North Vietnamese Communists might murder them because Father served in the South Vietnamese navy.

Mother sews each person a pack, and everyone packs clothes, toiletries, food, and one “choice” item. Hà chooses her doll. Just before the family leaves, they eat one of the papayas that’s almost ripe, but they have to leave the rest behind. They follow Uncle Son onto a navy ship that leaves in the middle of the night. A few days after they embark, a South Vietnamese pilot steers his helicopter into the water nearby and boards the ship to announce that the Communists took Saigon. South Vietnam is gone.

Weeks later, an American ship finds Hà’s ship, passes over boxes of provisions, and then tows Hà’s ship to Guam. There, the family lives in a tent city, and Mother considers selling the amethyst ring that Father gave her so she can buy supplies. On July 4, Mother decides that the family will move to the U.S., so they soon fly to another tent city in Florida. Families in Florida have to wait for Americans to sponsor them, and it takes Mother weeks to learn that Americans prefer to sponsor Christians. Not long after she changes her paperwork to say the family is Christian, a car salesman from Alabama agrees to sponsor Brother Quan and train him as a car repairman. So, the family moves to Alabama.

Hà is certain her sponsor is a cowboy, since he wears cowboy boots and a cowboy hat and smokes cigars. She likes him and can’t wait to ride his horse, but she doesn’t like his wife, who she never smiles and makes Hà’s family stay in the basement so the neighbors don’t see them. Soon, the cowboy sets Hà’s family up in a house with donated furniture, dishes, and clothes. Throughout, Brother Quan teaches Hà English, which seems to her like a totally ridiculous language with its hissing sounds and verbs that change spelling for no reason. Mother also writes a letter to Father’s brother in North Vietnam, asking if he has any information about Father.

Not long after the family moves, the cowboy takes Hà to register for school. On the way back, Hà works up the courage to ask if she can ride the cowboy’s horse. With Brother Quan’s help translating, Hà learns that the cowboy doesn’t have a horse, and that in the U.S., horses say “neigh,” not “hee.” She feels totally lost.

Hà’s first day of school is demoralizing. Her teacher, MiSSS SScott, thinks Hà’s name sounds like laughter—“ha-ha”—and Hà has no idea how to eat her strange food at lunch, or even where to sit. At recess, kids laugh at her, poke her, and pull her hair. Hà isn’t the only family member who had a hard first day at school or at work. Indeed, Brother Vū is the only one who seems happy, so that night, Hà begs him to teach her to fly-kick so she can get back at the bullies. He offers to teach her self-defense instead.

Though Brother Khôi’s offer to take Hà to school on his bike makes the next few weeks marginally better, Hà is miserable. MiSSS SScott makes Hà feel like she isn’t smart, and people throw eggs at the family’s door. Things come to a head when someone throws a brick through the window. After this, the cowboy takes Hà’s family to meet the neighbors. Most people slam their doors, but one woman, MiSSSisss WaSShington, hugs everyone and offers to tutor Hà and her brothers. With MiSSSisss WaSShington’s help, Hà learns more English. Soon, she knows what the bullies at school are saying.

The cowboy invites Hà’s family to his Baptist church, saying that if they agree to something, people will be kinder. The service is loud, and at the end, a loud, round man dips Mother, Hà, and Hà’s brothers into a pool. After this, the cowboy’s wife smiles at them. At night, though, Hà still listens to the soothing sounds of Mother chanting. In Alabama, though, Mother doesn’t have her usual incense to burn or her brass gong to ring.

A few weeks later, Hà admits to MiSSSisss WaSShington that she’s been eating candy and bread in the bathroom during lunch. MiSSSisss WaSShington begins packing Hà lunches, and Hà starts eating in the classroom with two other kids, Pem and SSsì-Ti-Vân. Things improve as Hà shows the class that she’s a good math student, though this turns her into a target for Pink Boy, the biggest bully at school. Hà also enjoys her lessons with Brother Vū, who these days goes by Vu Lee. Vu Lee now gives martial arts lessons to curious kids and adults in the neighborhood.

One day, Pink Boy calls Hà “pancake face.” Hà sobs, barely able to explain to Mother what a pancake is, and then tells MiSSSisss WaSShington what happened. MiSSSisss WaSShington shows Hà a photo album containing beautiful pictures that her son, Tom, took of Vietnam before he died fighting there. Seeing that one of the photos is of a papaya tree, Hà shares that papaya is her favorite fruit. The next morning, the cowboy, Mother, and Brother Quang accompany Hà to school for a meeting with Pink Boy and the principal. Pink Boy apologizes, but Hà knows he’s going to get revenge.

Later that week, after MiSSS SScott shows photos of the Buddha in class, Pink Boy and his friends chase Hà home shouting “Boo-Da” at her. A few days after this, Hà confesses to Mother that she’s being bullied at school as punishment for being mean to her desk mate in Saigon, and that she’s responsible for the family ending up in Alabama because she was the first to touch the floor last Tet. Mother assures Hà that it’s actually lucky that they’re in Alabama—Ha did nothing wrong.

When Pink Boy and his friends chase Hà after school again on Friday, she realizes she’s learned enough insults from him to shout back—and on Monday, rumors fly that Pink Boy’s burly older cousin is going to beat Hà up. Brother Khôi comes up with a plan, and on the appointed day, Hà trades coats with Pem after school and runs. Pink Boy chases her, though, so Hà stands still—as Vu Lee taught her—and dodges at the last minute, which causes Pink Boy to fall on the pavement. Vu Lee pulls up on his motorcycle and frightens Pink Boy away.

For Christmas, MiSSSisss WaSShington gives Hà dried, sugared papaya. It’s not the same as fresh papaya, so Hà throws it away and storms off to bed. When she gets up in the morning, she discovers that Mother rehydrated the papaya, and now, it isn’t bad. Pem also gives Hà a beautiful doll with long black hair, though Hà is ashamed that she has no gift for Pem. When she returns to school in January, Mother gives Hà flower seeds to give to Pem. Also after Christmas, Mother receives a letter from Father’s brother, who has no information about Father’s whereabouts. A few weeks later, Mother loses her amethyst ring at work. After searching, Mother decides this is a sign that Father is gone.

On Tet, Mother makes a version of bánh chung, the ceremonial dish for the holiday, with some new ingredients since she can’t find all the traditional ones. Mother also acts as the fortuneteller this year, and she says the family will continue to mix the old with the new. She sets up a permanent altar for Father on a tall bookshelf. 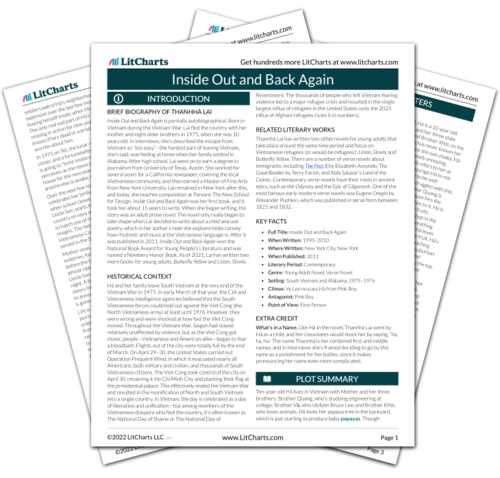 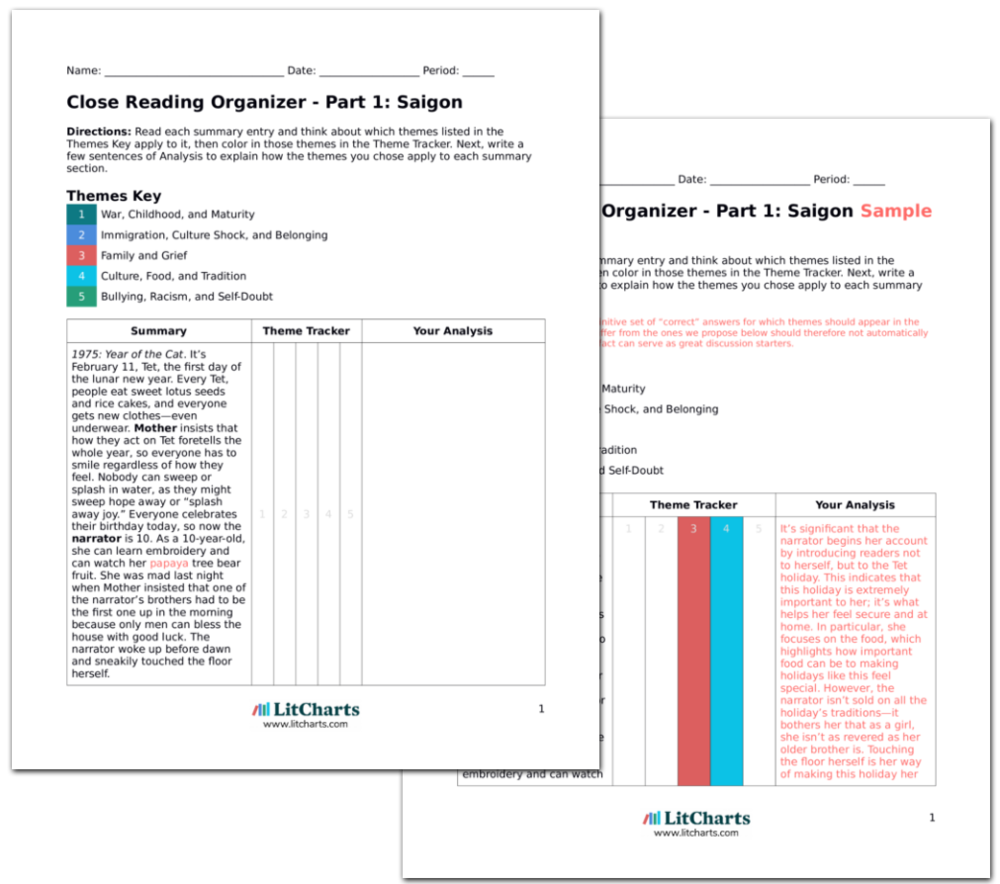