Download this LitChart! (PDF)
Teachers and parents! Struggling with distance learning? Our Teacher Edition on Johnny Tremain can help.

Welcome to the LitCharts study guide on Esther Forbes's Johnny Tremain. Created by the original team behind SparkNotes, LitCharts are the world's best literature guides.

A concise biography of Esther Forbes plus historical and literary context for Johnny Tremain.

A quick-reference summary: Johnny Tremain on a single page.

In-depth summary and analysis of every chapter of Johnny Tremain. Visual theme-tracking, too.

Explanations of Johnny Tremain's symbols, and tracking of where they appear.

An interactive data visualization of Johnny Tremain's plot and themes.

Forbes was born in Westborough, Massachusetts, though she spent a lot of time in her youth in Worcester, Massachusetts and in Madison, Wisconsin. She attended Bradford Academy, a junior college, as well as took classes at the University of Wisconsin. While living in Wisconsin, Forbes joined the editorial board for the Wisconsin Literary Magazine. Upon returning to Worcester, she began working for Houghton Mifflin Company and wrote articles for the Boston Evening Transcript. From 1926 to 1933, Forbes was married to an attorney, Albert L. Hoskins. Though she kept her married name after the divorce, she published under her maiden name. Forbes published her first novel, O Genteel Lady!, in 1926, and she wrote several other novels throughout her career. Following her divorce, she returned to Worcester to live with her mother and siblings, and her mother helped her research her novels (all of which were historical fiction, many set in the colonial era or right after the Revolutionary War) at the American Antiquarian Society. She’s best known for Johnny Tremain, which she began writing the day after Japanese forces bombed Pearl Harbor in 1941. The novel won the Newbery Award, and her biography of Paul Revere earned her the 1943 Pulitzer Prize for History. After Forbes’s death of rheumatic heart disease, the royalties for her novels, as well as her research for a novel about witchcraft, were donated to the American Antiquarian Society. She was the first elected female member of the society.
Get the entire Johnny Tremain LitChart as a printable PDF.
"My students can't get enough of your charts and their results have gone through the roof." -Graham S.
Download 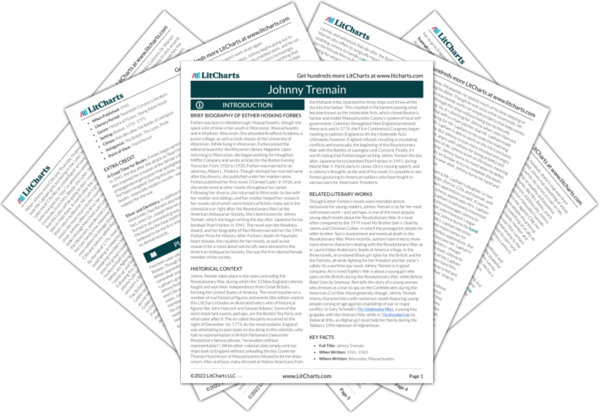 Johnny Tremain takes place in the years preceding the Revolutionary War, during which the 13 New England colonies fought and won their independence from Great Britain, forming the United States of America. The novel touches on a number of real historical figures and events (the edition used in this LitChart includes an illustrated who’s who of historical figures like John Hancock and Samuel Adams). Some of the most important events, perhaps, are the Boston Tea Party and what came after it. The so-called tea party occurred on the night of December 16, 1773. As the novel explains, England was attempting to pass taxes on tea along to the colonists, who had no representation in British Parliament (hence the Revolution’s famous phrase, “no taxation without representation”). While other colonial cities simply sent tea ships back to England without unloading the tea, Governor Thomas Hutchinson of Massachusetts refused to let the ships return. Men and boys, many dressed as Native Americans from the Mohawk tribe, boarded the three ships and threw all the tea into the harbor. This resulted in Parliament passing what became known as the Intolerable Acts, which closed Boston’s harbor and ended Massachusetts Colony’s system of local self-government. Colonists throughout New England protested these acts and in 1774, the First Continental Congress began meeting to petition England to lift the Intolerable Acts. Ultimately, however, England refused, resulting in escalating conflicts and eventually, the beginning of the Revolutionary War with the Battles of Lexington and Concord. Finally, it’s worth noting that Forbes began writing Johnny Tremain the day after Japanese forces bombed Pearl Harbor in 1941, during World War II. Particularly in James Otis’s rousing speech, and in Johnny’s thoughts at the end of the novel, it’s possible to see Forbes gesturing to American soldiers who have fought in various wars for Americans’ freedoms.

Other Books Related to Johnny Tremain

Though Esther Forbes’s novels were intended almost exclusively for young readers, Johnny Tremain is by far her most well-known work—and, perhaps, is one of the most popular young adult novels about the Revolutionary War. It’s most often compared to the 1974 novel My Brother Sam is Dead by James and Christian Collier, in which the protagonist details his older brother Sam’s involvement and eventual death in the Revolutionary War. More recently, authors have tried to show more diverse characters dealing with the Revolutionary War, as in Laurie Halse Anderson’s Seeds of America trilogy. In the three novels, an enslaved Black girl spies for the British and for the Patriots, all while fighting for her freedom and her sister’s safety. As a wartime spy novel, Johnny Tremain is in good company: Avi’s novel Sophia’s War is about a young girl who spies on the British during the Revolutionary War, while Behind Rebel Lines by Seymour Reit tells the story of a young woman who dresses as a man to spy on the Confederates during the American Civil War. More generally, though, Johnny Tremain shares characteristics with numerous novels featuring young people coming of age against a backdrop of war or major conflict. In Gary Schmidt’s The Wednesday Wars, a young boy grapples with the Vietnam War, while in The Breadwinner by Deborah Ellis, an Afghan girl must help her family during the Taliban’s 1996 takeover of Afghanistan.
Key Facts about Johnny Tremain

A Good Time for Books. Forbes began writing Johnny Tremain in 1941, the day after the attack on Pearl Harbor. Pearl Harbor also inspired the creation of the Writer’s War Board, a propaganda organization that spotlighted modern novels that the Nazis targeted. During this time, reading and buying books—especially modern novels—was taken as a sign of support for the war.

Silver and Dentistry. In addition to being an accomplished silversmith, Paul Revere also learned to make false teeth. In fact, when Dr. Joseph Warren died in battle in 1775 and was buried in an unmarked grave, Paul Revere ultimately identified the body by the false tooth he’d made for Warren. This is believed to be the first instance in which a body was identified by dental records. 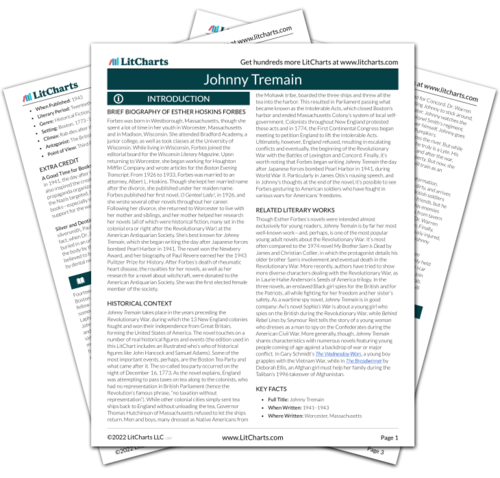 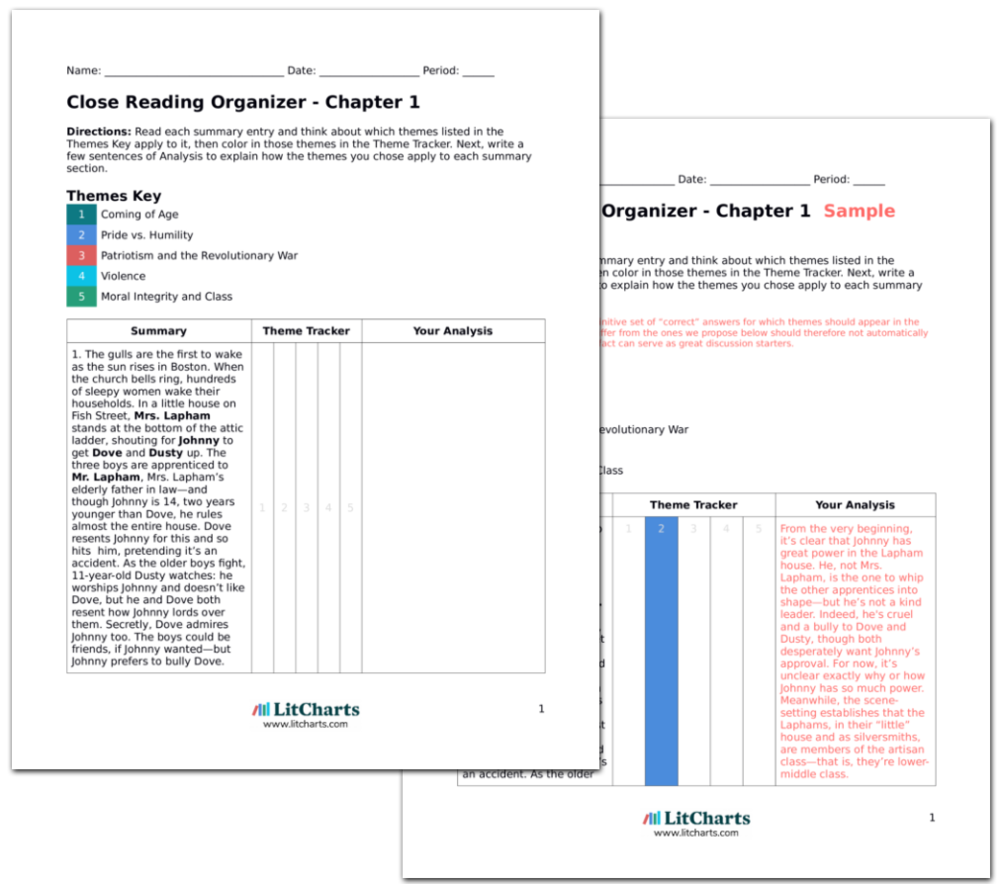