Download this LitChart! (PDF)
Teachers and parents! Struggling with distance learning? Our Teacher Edition on Journey can help.

Welcome to the LitCharts study guide on Patricia Grace's Journey. Created by the original team behind SparkNotes, LitCharts are the world's best literature guides.

A concise biography of Patricia Grace plus historical and literary context for Journey.

A quick-reference summary: Journey on a single page.

In-depth summary and analysis of every of Journey. Visual theme-tracking, too.

Explanations of Journey's symbols, and tracking of where they appear.

An interactive data visualization of Journey's plot and themes.

Born to a Māori father and white mother, Patricia Grace identifies as Māori and is affiliated with the iwi (clans) of Ngāti Toa, Ngāti Raukawa, and Te Āti Awa. Growing up, she spent some of her childhood in the suburban home that her father built outside of Wellington, New Zealand, and some of it on her father’s ancestral land of Hongoeka. Although she was an avid reader as a child, she started writing fiction only after attending Wellington Teachers’ College and becoming a full-time teacher at the age of 25. While teaching, she joined a writing club and began to publish her work, setting off her ground-breaking career. In 1975, she became the first female Māori writer to publish a collection of short stories. She then began writing prolifically while simultaneously raising seven children. As of 2021, Grace has written seven novels, seven short story collections, six children’s books, an autobiography, and a biography. Her work often deals with topics surrounding Māori identity and New Zealand’s history of colonialism. Some of her most famous works include Tu, written in 2004, which discusses the Māori Battalion that fought in Italy in World War II, and Potiki, written in 1986, which depicts a Māori community’s struggle to defend its land against development. In 2008, she won the prestigious Neustadt International Prize for Literature. She now lives on ancestral land near Hongoeka Bay.
Get the entire Journey LitChart as a printable PDF.
"My students can't get enough of your charts and their results have gone through the roof." -Graham S.
Download 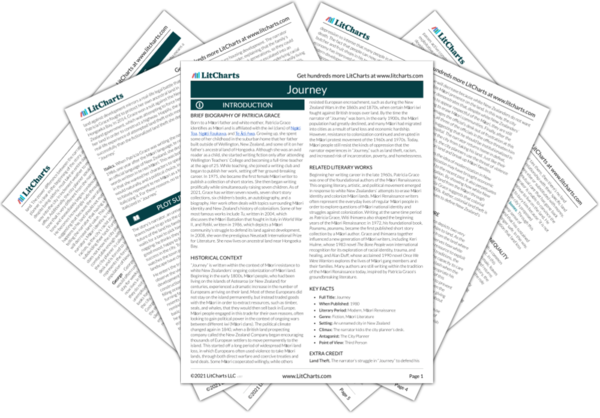 “Journey” is written within the context of Māori resistance to white New Zealanders’ ongoing colonization of Māori land. Beginning in the early 1800s, Māori people, who had been living on the islands of Aotearoa (or New Zealand) for centuries, experienced a dramatic increase in the number of Europeans arriving on their land. Most of these Europeans did not stay on the island permanently, but instead traded goods with the Māori in order to extract resources, such as timber, seals, and whales, that they would then sell back in Europe. Māori people engaged in this trade for their own reasons, often looking to gain political power in the context of ongoing wars between different iwi (Māori clans). The political climate changed again in 1840, when a British land prospecting company called the New Zealand Company began encouraging thousands of European settlers to move permanently to the island. This started off a long period of widespread Māori land loss, in which Europeans often used violence to take Māori lands, through both direct warfare and coercive treaties and land deals. Some Māori cooperated willingly, while others resisted European encroachment, such as during the New Zealand Wars in the 1860s and 1870s, when certain Māori iwi fought against British troops over land. By the time the narrator of “Journey” was born, in the early 1900s, the Māori population had greatly declined, and many Māori had migrated into cities as a result of land loss and economic hardship. However, resistance to colonization continued and erupted in the Māori protest movement of the 1960s and 1970s. Today, Māori people still resist the kinds of oppression that the narrator experiences in “Journey,” such as land theft, racism, and increased risk of incarceration, poverty, and homelessness.

Other Books Related to Journey

Beginning her writing career in the late 1960s, Patricia Grace was one of the foundational authors of the Māori Renaissance. This ongoing literary, artistic, and political movement emerged in response to white New Zealanders’ attempts to erase Māori identity and colonize Māori lands. Māori Renaissance writers often represent the everyday lives of regular Māori people in order to explore questions of Māori national identity and struggles against colonization. Writing at the same time period as Patricia Grace, Witi Ihimaera also shaped the beginning years of the Māori Renaissance: in 1972, his foundational book, Pounamu, pounamu, became the first published short story collection by a Māori author. Grace and Ihimaera together influenced a new generation of Māori writers, including Keri Hulme, whose 1983 novel The Bone People won international recognition for its exploration of racial identity, trauma, and healing, and Alan Duff, whose acclaimed 1990 novel Once We Were Warriors explores the lives of Māori gang members and their families. Many authors are still writing within the tradition of the Māori Renaissance today, inspired by Patricia Grace’s groundbreaking literature.
Key Facts about Journey

Land Theft. The narrator’s struggle in “Journey” to defend his land against development mirrors a real-life legal battle that Patricia Grace fought to protect her own ancestral land in Hongoeka Bay. In 2014, Grace won a suit against the New Zealand government, which was attempting to force her to sell her land in order to construct a highway. Happily, the author’s real-life experience of attempted land theft ends more successfully than the fictionalized land theft she depicts in “Journey.”

Italics. When Patricia Grace was writing the novel Potiki in 1986, one year after the Māori language, te reo Māori, became an official language of New Zealand, she decided not to italicize words written in te reo Māori. This was both a stylistic choice, in that she wanted her characters to speak on the page as they would naturally, and a political choice, in that she did not want to falsely represent te reo Māori as a foreign language by italicizing it. For these reasons, no te reo Māori words are italicized in “Journey.” 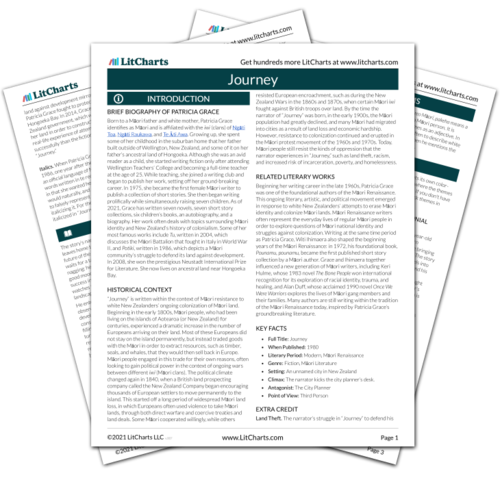 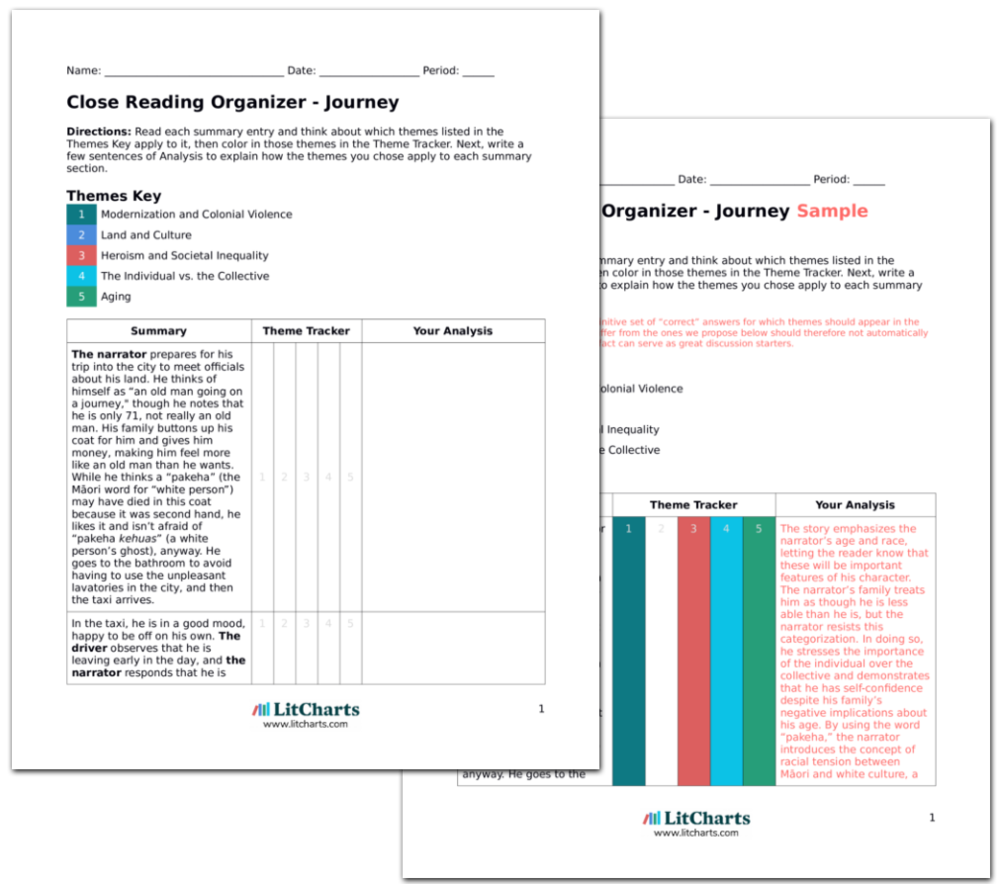