Download this LitChart! (PDF)
Teachers and parents! Struggling with distance learning? Our Teacher Edition on Meno can help.
LitCharts assigns a color and icon to each theme in Meno, which you can use to track the themes throughout the work.

In Plato’s Meno, Socrates and Meno—a Thessalian politician visiting Athens—speak at length about the process of learning, specifically unpacking whether or not virtue can be taught. Although Socrates remains skeptical that they will be able to answer this question without first finding a definition for virtue itself, he nevertheless says he’d like to engage in a dialogue with Meno in order to explore the matter. In doing so, he demonstrates his commitment to the process of thoughtful engagement. However, Meno soon sets forth a skeptical idea that Socrates reframes as a statement upholding that it’s impossible for anyone to learn anything (this is now commonly known as Meno’s Paradox). Socrates, for his part, dislikes the pessimism that comes along with this approach and ultimately works around the dilemma (outlined in more detail below) by agreeing that people don’t “learn,” but rather “recollect” knowledge that their souls—which have lived many lives—have already acquired. And though this seems to align with Meno’s skeptical view of the educational process, Socrates suggests that people need to do a fair amount of “searching” in order to come upon these recollections of knowledge, thereby putting his faith in the process of intellectual inquiry. In this manner, Socrates suggests that humans shouldn’t shy away from making philosophical investigations, even when such endeavors might seem futile.

Socrates implies that virtue cannot be taught, but he is still interested in exploring whether or not it can be. Meno, for his part, is doubtful that Socrates will be able to conduct a worthwhile inquiry without knowing what virtue is, saying, “How will you look for [virtue], Socrates, when you do not know at all what it is? How will you aim to search for something you do not know at all? If you should meet with it, how will you know that this is the thing that you did not know?” he asks, baffled by Socrates’s willingness to “search for something” he claims he doesn’t understand. In response, Socrates emphasizes Meno’s defeatist attitude, rephrasing his words so that they sound excessively pessimistic about the efficacy of teaching and learning. What he says is now known as the Meno’s Paradox; “Do you realize what a debater’s argument you are bringing up, that a man cannot search either for what he knows or for what he does not know?” Socrates asks. “He cannot search for what he knows—since he knows it, there is no need to search—nor for what he does not know, for he does not know what to look for.” This boils down to an argument upholding that it’s basically impossible to learn anything. Indeed, it’s clear in this moment that Meno has suggested that any kind of engaged intellectual thought is futile. And though Socrates himself has not yet proved that this isn’t the case, he disagrees with Meno’s newfound pessimism.

It’s worth considering the statement that prompts Meno to express this viewpoint in the first place. Before Meno outlines his paradox, Socrates says, “So now I do not know what virtue is; perhaps you knew before you contacted me, but now you are certainly like one who does not know. Nevertheless, I want to examine and seek together with you what it may be.” The most important part of this passage is its final sentence, in which Socrates expresses his desire to “examine and seek” information. What’s more, he says he wants to do this “together,” stressing the importance of dialogue and joint intellectual discovery. Whereas Meno has suddenly succumbed to the pessimistic view that no one can learn anything, Socrates commits himself to the process of critical inquiry.

After expressing his belief that “search[ing] for” certain ideas remains a worthwhile endeavor, Socrates sets forth a new idea about the learning process. Because the “human soul is immortal,” he says, it has lived many lives and undergone countless experiences. In fact, he upholds that there is “nothing” the soul “has not learned.” As such, “it is in no way surprising that it can recollect the things it knew before, both about virtue and other things,” Socrates says. Going on, he adds that “nothing prevents a man, after recalling one thing only […from] discovering everything else for himself, if he is brave and does not tire of the search […].” In other words, Socrates believes that people innately possess everything they might wish to know—all they need to do is access it, though this can be a “tire[some]” process.

To illustrate this point, Socrates addresses Meno’s slave, who has never been taught geometry. By drawing squares on the ground and asking the slave to answer simple but increasingly involved geometry questions, Socrates proves that the young man can indeed find certain informed “opinions” within himself. This, he upholds, is because the slave is “recollecting” information that his soul has already learned. At the same time, though, it’s important to understand that the slave would never have been able to come to these conclusions without someone to help him “recollect” the information. “These opinions have now just been stirred up like a dream,” Socrates says to Meno, making it clear that, although he didn’t teach the slave anything, his guided questions (a form of teaching now known as the Socratic Method) played an important role in the young man’s ability to “recollect” what would otherwise have remained dormant within him.

By emphasizing his own importance in the slave’s process of discovery, Socrates suggests that—although people can’t teach each other new information—they can still help one another come to important realizations. This is why he rejects Meno’s Paradox, which he thinks will make people “idle” and mentally lazy. Although his own approach to teaching and learning doesn’t solve the fact that it’s impossible to impart wisdom to another person, it at least encourages people to engage in critical discourses that might lead to valuable recollections. In this way, Socrates advocates for the process of intellectual inquiry, framing it as an undeniably worthwhile endeavor.

The ThemeTracker below shows where, and to what degree, the theme of Teaching, Learning, and Intellectual Inquiry appears in each chapter of Meno. Click or tap on any chapter to read its Summary & Analysis.
How often theme appears:
chapter length:
Chapter
Meno
Get the entire Meno LitChart as a printable PDF.
"My students can't get enough of your charts and their results have gone through the roof." -Graham S.
Download 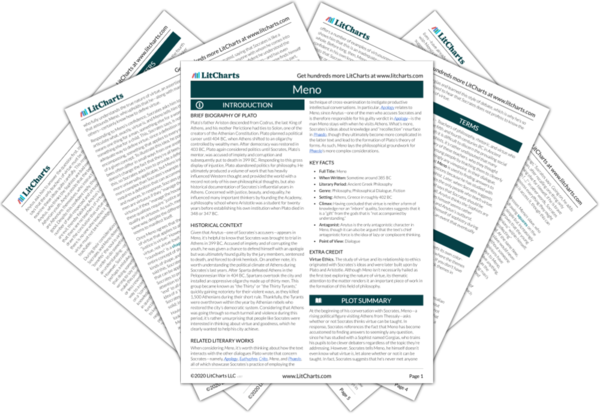 Below you will find the important quotes in Meno related to the theme of Teaching, Learning, and Intellectual Inquiry.
Meno Quotes

SOCRATES: […] So now I do not know what virtue is; perhaps you knew before you contacted me, but now you are certainly like one who does not know. Nevertheless, I want to examine and seek together with you what it may be.

As the soul is immortal, has been born often, and has seen all things here and in the underworld, there is nothing which it has not learned; so it is in no way surprising that it can recollect the things it knew before, both about virtue and other things. As the whole of nature is akin, and the soul has learned everything, nothing prevents a man, after recalling one thing only—a process men call learning—discovering everything else for himself, if he is brave and does not tire of the search, for searching and learning are, as a whole, recollection. We must, therefore, not believe that debater’s argument, for it would make us idle, and fainthearted men like to hear it, whereas my argument makes them energetic and keen on the search. I trust that this is true, and I want to inquire along with you into the nature of virtue.

SOCRATES: I will tell you. A man who knew the way to Larissa[…], and went there and directed others would surely lead them well and correctly? — Certainly.

SOCRATES: What if someone had had a correct opinion as to which was the way but had not gone there nor indeed had knowledge of it, would he not also lead correctly? — Certainly.

SOCRATES: And as long as he has the right opinion about that of which the other has knowledge, he will not be a worse guide than the one who knows, as he has a true opinion, though not knowledge. 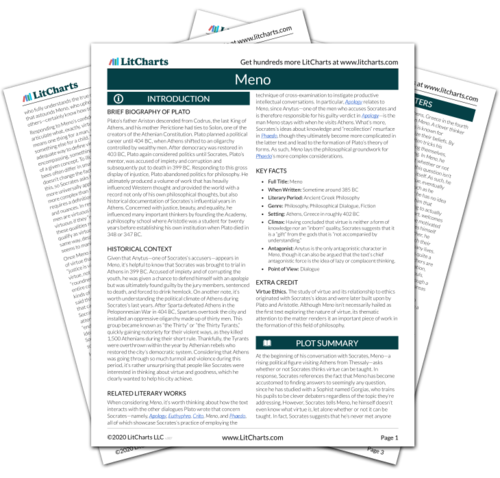