Brussels is the base of operations for Mrs. Warren’s small empire of brothels across Europe. She also has brothels in Vienna, Ostend, and Budapest. Early on in the play, these European cities represent the secret life Mrs. Warren leads away from her daughter. They are also places where men like Praed and Frank seek to go to experience beauty, romance, or fun. Later, after Vivie realizes what her mother’s business consists of, these European cities come to represent the corrupt, exploitative world of the idle, worthless upper class. Although Vivie seeks to sequester herself in London from the unpleasantness she imagines exists out of sight on the European continent, as Crofts tells her, the profits of these businesses are all around her. In the end, then, as a far-off city with many ties to England, Brussels represents the illusion that one can ever separate oneself from prostitution and other forms of exploitation.

The Mrs. Warren’s Profession quotes below all refer to the symbol of Brussels. For each quote, you can also see the other characters and themes related to it (each theme is indicated by its own dot and icon, like this one:

). Note: all page numbers and citation info for the quotes below refer to the Grindl Press edition of Mrs. Warren’s Profession published in 2016.
Act 4 Quotes

VIVIE. I am sure that if I had the courage I should spend the rest of my life in telling everybody—stamping and branding it into them until they all felt their part in its abomination as I feel mine. There is nothing I despise more than the wicked convention that protects these things by forbidding a woman to mention them. And yet I can't tell you. The two infamous words that describe what my mother is are ringing in my ears and struggling on my tongue; but I can't utter them: the shame of them is too horrible for me. [She buries her face in her hands. The two men, astonished, stare at one another and then at her. She raises her head again desperately and snatches a sheet of paper and a pen]. Here: let me draft you a prospectus.
FRANK. Oh, she's mad. Do you hear, Viv? mad. Come! pull yourself together.
VIVIE. You shall see. [She writes]. "Paid up capital: not less than forty thousand pounds standing in the name of Sir George Crofts, Baronet, the chief shareholder. Premises at Brussels, Ostend, Vienna, and Budapest. Managing director: Mrs Warren"; and now don't let us forget her qualifications: the two words. [She writes the words and pushes the paper to them]. There! Oh no: don't read it: don't! [She snatches it back and tears it to pieces; then seizes her head in her hands and hides her face on the table].
[Frank, who has watched the writing over her shoulder, and opened his eyes very widely at it, takes a card from his pocket; scribbles the two words on it; and silently hands it to Praed, who reads it with amazement and hides it hastily in his pocket.]

Get the entire Mrs. Warren’s Profession LitChart as a printable PDF.
"My students can't get enough of your charts and their results have gone through the roof." -Graham S.
Download 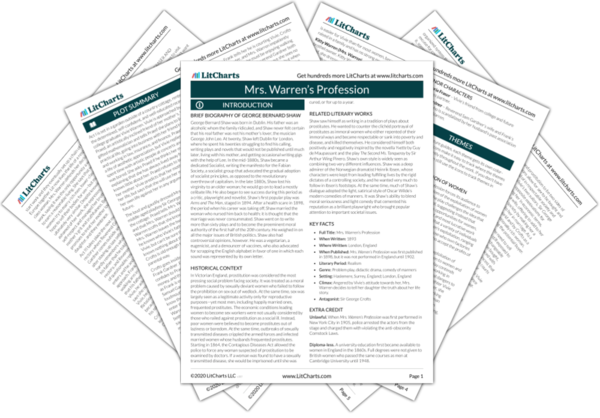 The timeline below shows where the symbol Brussels appears in Mrs. Warren’s Profession. The colored dots and icons indicate which themes are associated with that appearance.

...then they both saved steadily and became partners. They set up a high-class brothel in Brussels, and treated the women well. Mrs. Warren says her brothel was a much better place... (full context)

...change her mind if she went to these European cities, or experienced the fun in Brussels. Vivie gasps in loathing and jumps to her feet. Praed is confused and alarmed at... (full context) 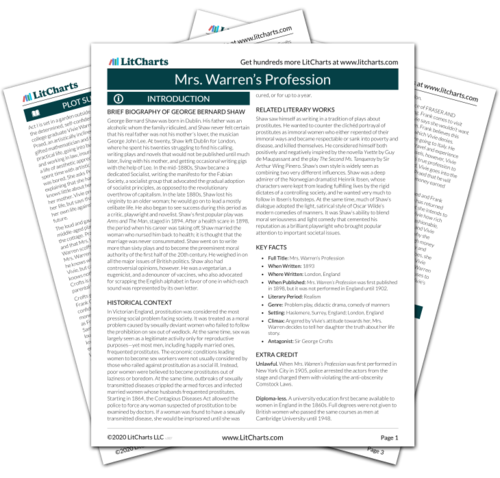 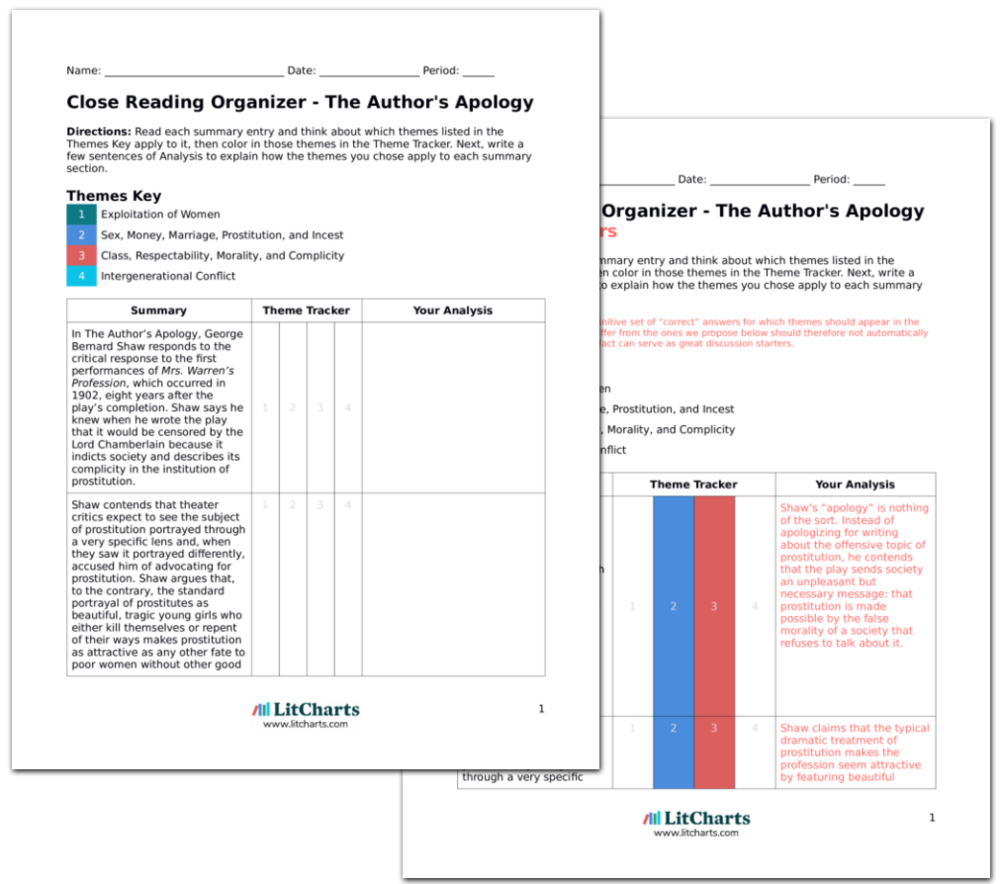