Download this LitChart! (PDF)
Teachers and parents! Struggling with distance learning? Our Teacher Edition on Never Let Me Go can help.

Welcome to the LitCharts study guide on Kazuo Ishiguro's Never Let Me Go. Created by the original team behind SparkNotes, LitCharts are the world's best literature guides.

A concise biography of Kazuo Ishiguro plus historical and literary context for Never Let Me Go.

A quick-reference summary: Never Let Me Go on a single page.

In-depth summary and analysis of every chapter of Never Let Me Go. Visual theme-tracking, too.

Explanations, analysis, and visualizations of Never Let Me Go's themes.

Description, analysis, and timelines for Never Let Me Go's characters.

Explanations of Never Let Me Go's symbols, and tracking of where they appear.

An interactive data visualization of Never Let Me Go's plot and themes.

Born in Japan but raised primarily in the UK (where his father worked as an oceanographic scientist), Kazuo Ishiguro was a student at the University of Kent, and later earned a master’s degree in creative writing at the University of East Anglia. Ishiguro achieved global renown for his novel The Remains of the Day, which won the Booker Prize in 1989. Many of Ishiguro’s works are characterized by “dramatic irony,” wherein the reader knows more about the narrator’s life than the narrator does. This device has a long literary history, and is used to particular effect in Never Let Me Go, as the reader learns about the novel’s alternate universe through Kathy’s description of her life. Ishiguro is still writing today and resides in London.
Get the entire Never Let Me Go LitChart as a printable PDF.
"My students can't get enough of your charts and their results have gone through the roof." -Graham S.
Download 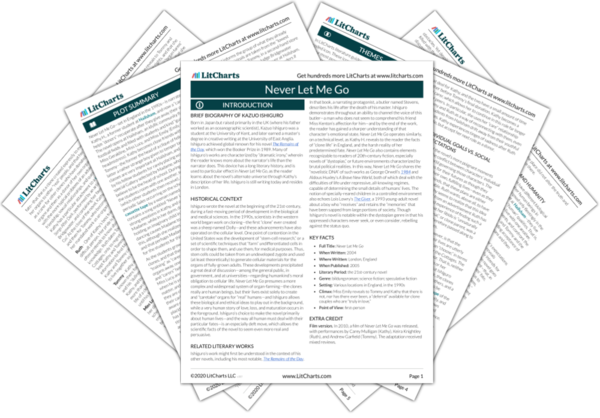 Ishiguro wrote the novel at the beginning of the 21st-century, during a fast-moving period of development in the biological and medical sciences. In the 1990s, scientists in the western world began work on cloning—the first “clone” ever created was a sheep named Dolly—and these advancements have also operated on the cellular level. One point of contention in the United States was the development of “stem-cell research,” or a set of scientific techniques that “farm” undifferentiated cells in order to shape them, and use them, for medical purposes. Thus, stem cells could be taken from an undeveloped zygote and used (at least theoretically) to generate cellular materials for the organs of fully-grown adults. These developments precipitated a great deal of discussion—among the general public, in government, and at universities—regarding humankind’s moral obligation to cellular life. Never Let Me Go presumes a more complex and widespread system of organ-farming—the clones really are human beings, but their lives exist solely to create and "caretake" organs for “real” humans—and Ishiguro allows these biological and ethical ideas to play out in the background, while a very human story of love, loss, and maturation occurs in the foreground. Ishiguro’s choice to make the novel primarily about human lives—and the way all human must deal with their particular fates—is an especially deft move, which allows the scientific facts of the novel to seem even more real and persuasive.

Other Books Related to Never Let Me Go

Ishiguro’s work might first be understood in the context of his other novels, including his most notable, The Remains of the Day. In that book, a narrating protagonist, a butler named Stevens, describes his life after the death of his master. Ishiguro demonstrates throughout an ability to channel the voice of this butler—a man who does not seem to comprehend his friend Miss Kenton’s affection for him—and by the end of the work, the reader has gained a sharper understanding of that character’s emotional state. Never Let Me Go operates similarly, on a technical level, as Kathy H. reveals to the reader the facts of “clone life” in England, and the harsh reality of her predetermined fate. Never Let Me Go also contains elements recognizable to readers of 20th-century fiction, especially novels of “dystopias,” or future environments characterized by brutal political realities. In this way, Never Let Me Go shares the “novelistic DNA” of such works as George Orwell’s 1984 and Aldous Huxley’s A Brave New World, both of which deal with the difficulties of life under repressive, all-knowing regimes, capable of determining the small details of humans’ lives. The notion of specially-reared children in a controlled environment also echoes Lois Lowry’s The Giver, a 1993 young-adult novel about a boy who “receives” and retains the “memories” that have been sapped from large portions of society. Though Ishiguro's novel is notable within the dystopian genre in that his oppressed characters never seek, or even consider, rebelling against the status quo.
Key Facts about Never Let Me Go

Film version. In 2010, a film of Never Let Me Go was released, with performances by Carey Mulligan (Kathy), Keira Knightley (Ruth), and Andrew Garfield (Tommy). The adaptation received mixed reviews. 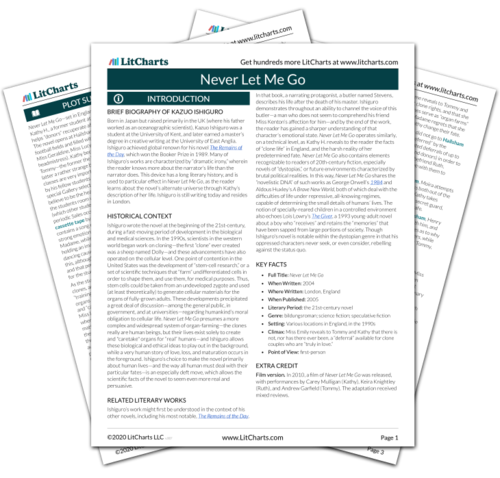 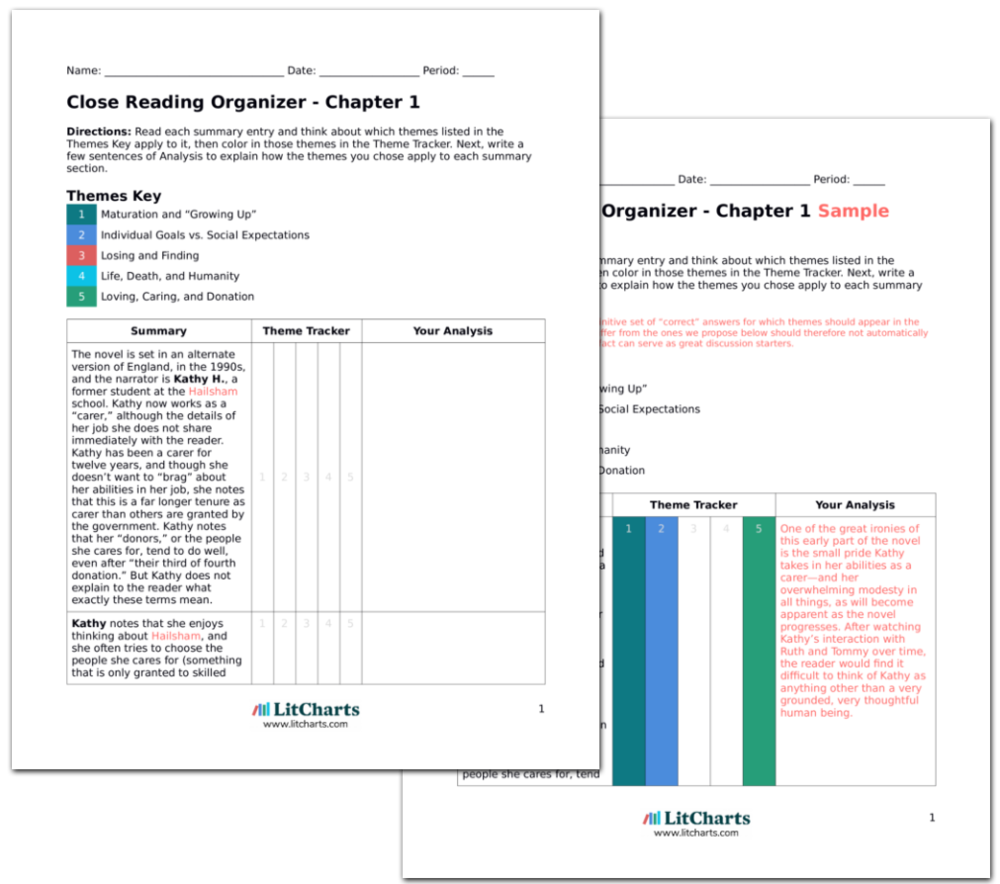