Download this LitChart! (PDF)
Teachers and parents! Struggling with distance learning? Our Teacher Edition on Noughts and Crosses can help.

Welcome to the LitCharts study guide on Malorie Blackman's Noughts and Crosses. Created by the original team behind SparkNotes, LitCharts are the world's best literature guides.

A concise biography of Malorie Blackman plus historical and literary context for Noughts and Crosses.

A quick-reference summary: Noughts and Crosses on a single page.

In-depth summary and analysis of every chapter of Noughts and Crosses. Visual theme-tracking, too.

Explanations, analysis, and visualizations of Noughts and Crosses's themes.

Description, analysis, and timelines for Noughts and Crosses's characters.

Description, analysis, and timelines for Noughts and Crosses's terms.

Explanations of Noughts and Crosses's symbols, and tracking of where they appear.

An interactive data visualization of Noughts and Crosses's plot and themes.

Blackman was born in London, England to Barbadian immigrants. As a kid, she wanted to be an English teacher, but she initially attended college to become a systems programmer instead. She later graduated from the National Film and Television School. Since starting to publish in 1990, Blackman has published a number of novels for adults and children, short stories, picture books, and early chapter books, in addition to writing for film, radio, and the stage. In terms of her novels, Blackman is best known for the Noughts & Crosses series, which consists of five novels and three companion novellas. The first in the series, Noughts & Crosses, was voted number 61 on BBC’s 2003 “Big Read” list, ranking ahead of Charles Dickens’s A Tale of Two Cities and some of Terry Pratchett’s novels. She also made history by being the first Black person to ever work on the television show Doctor Who. She received an OBE (a British order of chivalry) in 2008 for her contributions to literature. She lives with her husband and daughter in Kent, England.
Get the entire Noughts and Crosses LitChart as a printable PDF.
"My students can't get enough of your charts and their results have gone through the roof." -Graham S.
Download 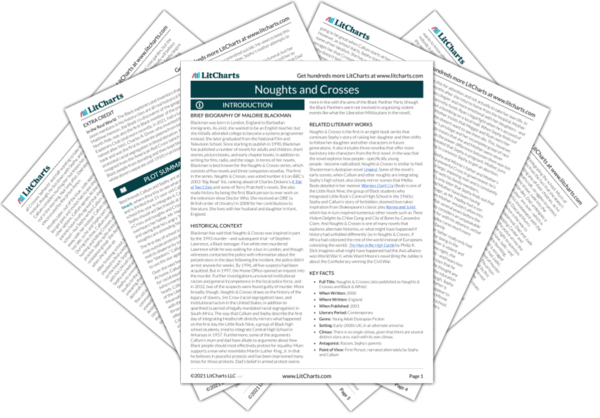 Historical Context of Noughts and Crosses

Blackman has said that Noughts & Crosses was inspired in part by the 1993 murder—and subsequent trial—of Stephen Lawrence, a Black teenager. Five white men murdered Lawrence while he was waiting for a bus in London, and though witnesses contacted the police with information about the perpetrators in the days following the incident, the police didn’t arrest anyone for weeks. By 1996, all five suspects had been acquitted. But in 1997, the Home Office opened an inquest into the murder. Further investigations uncovered institutional racism and general incompetence in the local police force, and in 2012, two of the suspects were found guilty of murder. More broadly, though, Noughts & Crosses draws on the history of the legacy of slavery, Jim Crow (racial segregation) laws, and institutional racism in the United States, in addition to apartheid (a period of legally mandated racial segregation) in South Africa. The way that Callum and Sephy describe the first day of integrating Heathcroft directly mirrors what happened on the first day the Little Rock Nine, a group of Black high school students, tried to integrate Central High School in Arkansas in 1957. Furthermore, some of the arguments Callum’s mum and dad have allude to arguments about how Black people should most effectively protest for equality: Mum supports a man who resembles Martin Luther King, Jr. in that he believes in peaceful protests and has been imprisoned many times for those protests. Dad’s belief in armed protest seems more in line with the aims of the Black Panther Party (though the Black Panthers were not involved in organizing violent events like what the Liberation Militia plans in the novel).

Other Books Related to Noughts and Crosses

Noughts & Crosses is the first in an eight-book series that continues Sephy’s story of raising her daughter and then shifts to follow her daughter and other characters in future generations. It also includes three novellas that offer more backstory into characters from the first novel. In the way that the novel explores how people—specifically young people—become radicalized, Noughts & Crosses is similar to Neil Shusterman’s dystopian novel Unwind. Some of the novel’s early scenes, when Callum and other noughts are integrating Sephy’s high school, also closely mirror scenes that Melba Beals detailed in her memoir Warriors Don’t Cry (Beals is one of the Little Rock Nine, the group of Black students who integrated Little Rock’s Central High School in the 1960s). Sephy and Callum’s story of forbidden, doomed love takes inspiration from Shakespeare’s classic play Romeo and Juliet, which has in turn inspired numerous other novels such as These Violent Delights by Chloe Gong and City of Bones by Cassandra Clare. And Noughts & Crosses is one of many novels that explores alternate histories, or what might have happened if history had unfolded differently (so in Noughts & Crosses, if Africa had colonized the rest of the world instead of Europeans colonizing the world). The Man in the High Castle by Philip K. Dick imagines what might have happened had the Axis alliance won World War II, while Ward Moore’s novel Bring the Jubilee is about the Confederacy winning the Civil War.
Key Facts about Noughts and Crosses

Extra Credit for Noughts and Crosses

In the Real World. The Black explorers and inventors that Mr. Jason mentions in his history class are all real historical figures. Matthew Henson, the Black co-discoverer of the geographic North Pole, was also the first Black member of the prestigious Explorers Club (and more recently, in 2021, had a lunar crater named after him). Charles R. Drew, who invented the blood bank and was the first to separate plasma from blood, also protested racial segregation in blood donation. He even resigned from the American Red Cross (which initially barred Black people from donating and then kept blood from Black and white donors separate until 1950) in protest. 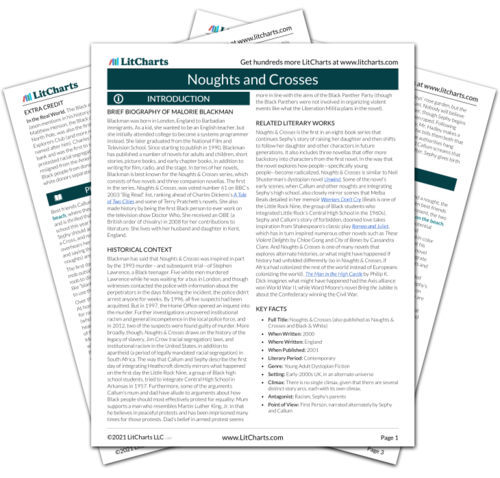 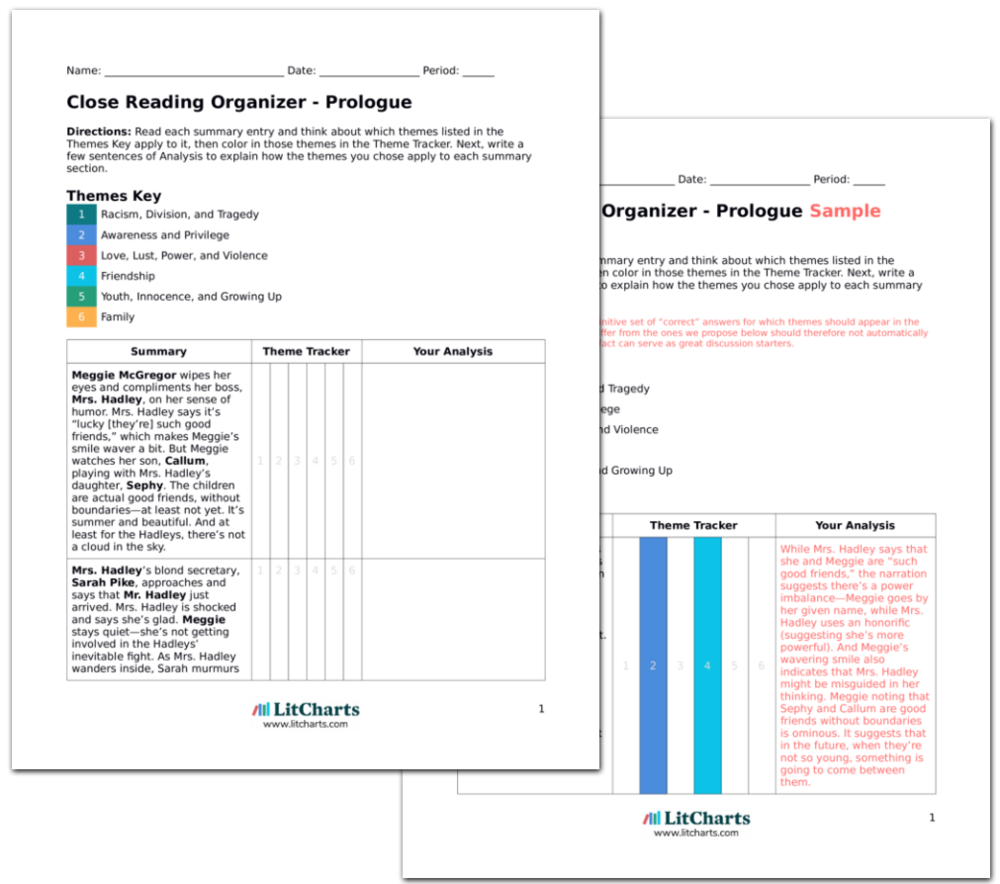