Download this LitChart! (PDF)
Teachers and parents! Struggling with distance learning? Our Teacher Edition on On the Come Up can help.

Welcome to the LitCharts study guide on Angie Thomas's On the Come Up. Created by the original team behind SparkNotes, LitCharts are the world's best literature guides.

On the Come Up: Introduction

A concise biography of Angie Thomas plus historical and literary context for On the Come Up.

On the Come Up: Plot Summary

A quick-reference summary: On the Come Up on a single page.

On the Come Up: Detailed Summary & Analysis

In-depth summary and analysis of every chapter of On the Come Up. Visual theme-tracking, too.

On the Come Up: Themes

Explanations, analysis, and visualizations of On the Come Up's themes.

On the Come Up: Quotes

On the Come Up's important quotes, sortable by theme, character, or chapter.

On the Come Up: Characters

Description, analysis, and timelines for On the Come Up's characters.

On the Come Up: Symbols

Explanations of On the Come Up's symbols, and tracking of where they appear.

On the Come Up: Theme Wheel

An interactive data visualization of On the Come Up's plot and themes.

Angie Thomas was born and raised in Jackson, Mississippi. She was inspired to write when she was six years old: after witnessing a shootout, Angie’s mother took her to the library to introduce young Thomas to the world beyond what she witnessed. She went on to receive a BFA in creative writing from Belhaven University, where she was the first black student to graduate from the program. Thomas's work is greatly influenced by the deaths of Trayvon Martin, Michael Brown, and Eric Garner, and the Black Lives Matter movement as a whole. This influence led to Thomas's first book The Hate U Give, which was an immediate bestseller. To write it, Thomas received a grant from the organization We Need Diverse Books in 2015. The Hate U Give has won a number of prizes and awards, including the Coretta Scott King Award and the William C. Morris Award.
Get the entire On the Come Up LitChart as a printable PDF.
"My students can't get enough of your charts and their results have gone through the roof." -Graham S.
Download 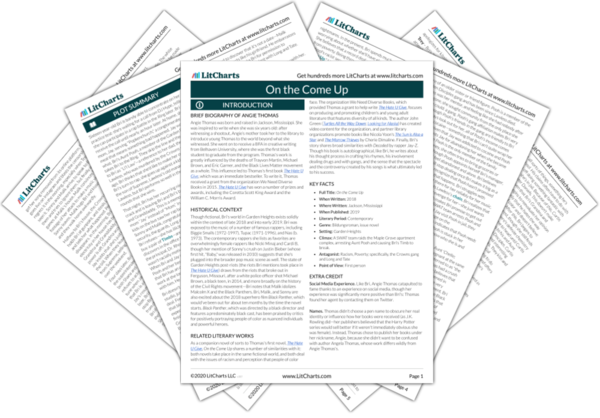 Historical Context of On the Come Up

Though fictional, Bri's world in Garden Heights exists solidly within the context of late 2018 and into early 2019. Bri was exposed to the music of a number of famous rappers, including Biggie Smalls (1972-1997), Tupac (1971-1996), and Nas (b. 1973). The contemporary rappers she lists as favorites are overwhelmingly female rappers like Nicki Minaj and Cardi B, though her mention of Sonny's crush on Justin Bieber (whose first hit, "Baby," was released in 2010) suggests that she's plugged into the broader pop music scene as well. The state of Garden Heights post-riots (the riots Bri mentions took place in The Hate U Give) draws from the riots that broke out in Ferguson, Missouri, after a white police officer shot Michael Brown, a black teen, in 2014, and more broadly on the history of the Civil Rights movement—Bri notes that Malik idolizes Malcolm X and the Black Panthers. Bri, Malik, and Sonny are also excited about the 2018 superhero film Black Panther, which would've been out for about ten months by the time the novel starts. Black Panther, which was directed by a black director and features a predominately black cast, has been praised by critics for positively portraying people of color as nuanced individuals and powerful heroes.

Other Books Related to On the Come Up

As a companion novel of sorts to Thomas's first novel, The Hate U Give, On the Come Up shares a number of similarities with it: both novels take place in the same fictional world, and both deal with the issues of racism and perception that people of color face. The organization We Need Diverse Books, which provided Thomas a grant to help write The Hate U Give, focuses on producing and promoting children's and young adult literature that features diversity of all kinds. The author John Green (Turtles All the Way Down; Looking for Alaska) has created video content for the organization, and partner library organizations promote books like Nicola Yoon's The Sun is Also a Star and The Marrow Thieves by Cherie Dimaline. Finally, Bri's story shares broad similarities with Decoded by rapper Jay-Z. Though his book is autobiographical, like Bri, he writes about his thought process in crafting his rhymes, his involvement dealing drugs and with gangs, and the sense that the spectacle and the controversy created by his songs is what ultimately led to his success.
Key Facts about On the Come Up

Extra Credit for On the Come Up

Social Media Experience. Like Bri, Angie Thomas catapulted to fame thanks to an experience on social media, though her experience was significantly more positive than Bri's: Thomas found her agent by contacting them on Twitter.

Names. Thomas didn't choose a pen name to obscure her real identity or influence how her books were received (as J.K. Rowling did—her publishers believed that the Harry Potter series would sell better if it weren't immediately obvious she was female). Instead, Thomas chose to publish her books under her nickname, Angie, because she didn't want to be confused with author Angela Thomas, whose work differs wildly from Angie Thomas's. 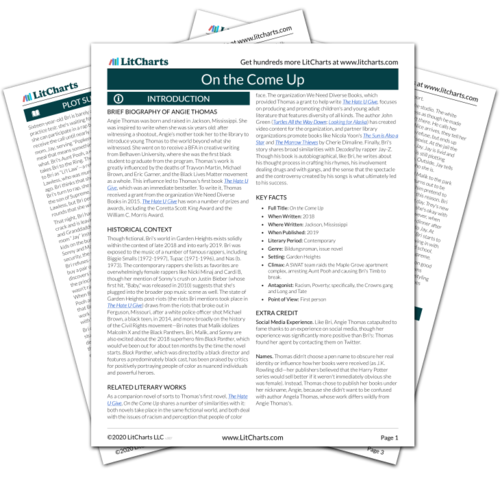 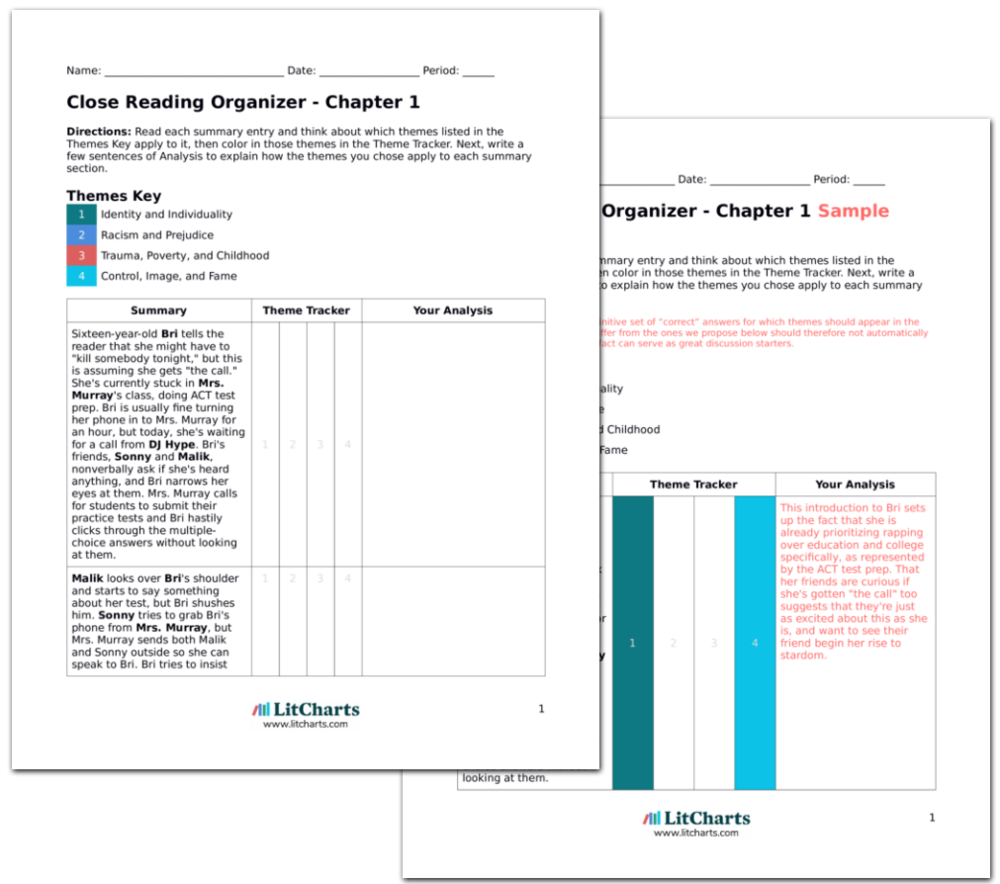