Get LitCharts A+
LitCharts assigns a color and icon to each theme in Ordinary People, which you can use to track the themes throughout the work.

Ordinary People explores, expands, and complicates the idea of what it means to suffer from mental disorder. At first glance, Conrad seems to represent a typical understanding of mental disorder. Having lost his brother in a sailing accident and blaming himself for the outcome, Conrad attempts suicide and is committed to a mental hospital. Even after his release he continues to consult Dr. Berger, a therapist. Conrad's main task (which is arguably the central activity of the novel) is to overcome the crushing sense of guilt that fuels his torment.

But however distinctive his situation may be, Conrad isn't the only character struggling with the impact of his brother's death. While Conrad's parents might at first appear to be coping with the tragedy as well as might be expected, Guest uses the language of mental disease to describe them both. Beth, beneath her composed exterior, is plagued by "hysteria" and "madness." These emotions especially come to the fore when Beth feels "distinctly trapped" in her living situation—when cleanliness or quiet are compromised and she finds herself unable to change the circumstances. Cal, too, with his lack of direction and guilt-ridden approach to parenting, feels "trapped and hot" when a casual visit with Berger slowly leads him to confront the truth about his own misguided thirst for control. Even Berger's appearance and mannerisms initially strike Cal and Conrad as signs of the doctor's "madness."

Ultimately, the novel suggests that mental disorder is more than a matter of medical diagnosis. Conrad's friend Karen recalls an observation she made while the two were in hospital: "People were, you know, turned on all the time. And you just can't live like that. You can't live with all that emotion floating around, looking for a place to land. It's too exhausting." In contrast, Berger advises Conrad that "The thing that hurts you is sitting on yourself....[D]epression is not sobbing and crying and giving vent, it is plain and simple reduction of feeling." Mental health in the novel is a balance between these extremes of being too "turned on" and experiencing a "reduction of feeling." Because they can neither "hold it together" in the face of grief, nor remain emotionally honest, all of the Jarretts are ill at ease in ways that stifle their relationships both with others and with their inner selves. A lack of emotional balance has nothing to do with looking or feeling "sick". As many of the characters in Ordinary People discover, mental disorder can set in even when everything seems to be under control. 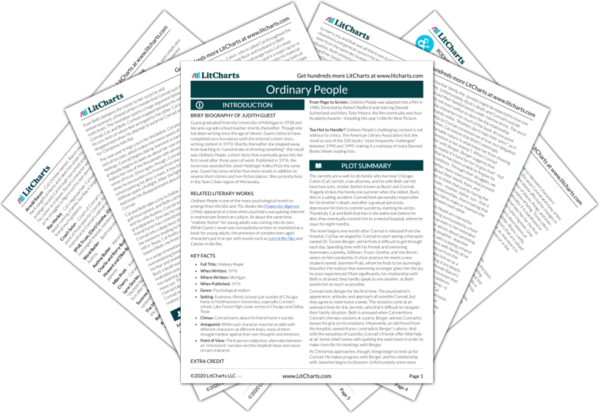 Below you will find the important quotes in Ordinary People related to the theme of Mental Disorder.
Chapter 2 Quotes

Responsibility. That is fatherhood. You cannot afford to miss any signs, because that is how it happens: somebody holding too much inside, somebody else missing signs.

Choir is the one time of day when he lets down his guard; there is peace in the strict concentration that Faughnan demands of all of them, in the sweet dissonance of voices in chorus. He has sung in here since he was a freshman. …Every minute of every hour that is spent there, they work, and there is only one way to prove yourself. You sing, and sing, and sing. All else is unimportant.

The worst, the first session has been gotten through. And the guy is not bad; at least he is loose. The exchange about the razor blades reminded him of something good about the hospital; nobody hid anything there. People kidded you about all kinds of stuff and it was all right; it even helped to stay the flood of shame and guilt. …So, how do you stay open, when nobody mentions anything, when everybody is careful not to mention it?

"Things were so different in the hospital. People were, you know, turned on all the time. And you just can't live like that. You can't live with all that emotion floating around, looking for a place to land. It's too exhausting. It takes so much energy, just to get through a day…"

Later on, he may become bored and drink too much. Or else he will enjoy himself, relax, and drink too much. Another familiar pattern. He has noted this about himself lately: that he drinks too much when they go out. Because drinking helps. It has gotten him through many evenings, either deadening the pain or raising him above it to where small events seem pleasurable and worth recording.

In bed he waits for sleep. He cannot get under until he has reviewed the day, counted up his losses. He must learn more control, cannot allow himself the luxury of anger. He has seen it happen before. Guys become easy targets for the Stillmans of the world. Next time laugh when he needles you.

"…Beth, too. How is she? I only see her at bridge once a month, and we never seem to get a chance to talk."
"She's busy, too," Cal says. "She's chairing the tennis tournament at Onwentsia next spring. She spends a lot of time over there."
"I admire her organization," Carole says. "She's such a perfectionist. And yet she never lets herself get trapped into things she doesn't want to do. Now, there's an art. I'm just beginning to learn the trick myself. I hope it's not too late!"

Berger laughs. "When's the last time you got really mad?"
He says, carefully, "When it comes, there's always too much of it. I don't know how to handle it."
"Sure, I know," Berger says. "It's a closet full of junk. You open the door and everything falls out."
"No," he says. "There's a guy in the closet. I don't even know him, that's the problem."
"Only way you're ever gonna get to know him," Berger says, "is to let him out now and then. …"
"Sometimes," he says, "when you let yourself feel, all you feel is lousy."
Berger nods. "Maybe you gotta feel lousy sometime, in order to feel better. A little advice, kiddo, about feeling. Don't think too much about it. And don't expect it always to tickle."

Afterward. The hammer blows of guilt and remorse. He has no weapons with which to fight them off. No words of comfort, none of Berger's advice applies. He has slandered her, to her face and behind her back. He has pushed everyone away who tries to help. If he could apologize. If he only could but they are no longer at home to him and it is not their fault. All his fault. All connections with him result in failure. Loss. Evil.

"Geez, if I could get through to you, kiddo, that depression is not sobbing and crying and giving vent, it is plain and simple reduction of feeling. Reduction, see? Of all feeling. People who keep stiff upper lips find that it's damn hard to smile."

She laughs. "Why won't you take anything seriously?"
He lies down flat, the hat over his face. "No sense taking the questions seriously, if there aren't any answers."
"Con. Do you believe people are punished for the things they do?"
"Punished You mean by God?"
"Yes."
"I don't believe in God," he says.
…She turns toward him, and the ends of her hair fall lightly against his chest. "What do you believe in?"
"Oh, tennis courts, wallpaper," he says, "Florsheim shoes, Miami Beach—"
"Liar," she says, her arms sliding around his neck.
"—you," he says, kissing her.
"Liar again, but that's nice."
And he squeezes her tightly, feeling the sense of calm, of peace slowly gathering, spreading itself within him. He is in touch for good, with hope, with himself, no matter what. Berger is right, the body never lies.

And there are too many rooms to which he has no access; too much that he doesn't understand any more. If he could know what he used to know! But what did he really know? There is addiction here: to secrecy; to a private core within herself that is so much deeper than he ever imagined it to be. He has no such core; at least, he cannot find it, if it is there. Is it fair to deny her the right to keep it, because he hasn't this space? This need?

For he sees something else here: that her outer life is deceiving; that she gives the appearance of orderliness, of a cash-register practicality about herself; but inside, what he has glimpsed is not order, but chaos; not practicality at all, but stubborn, incredible impulse.