Download this LitChart! (PDF)
Teachers and parents! Struggling with distance learning? Our Teacher Edition on Pachinko can help.

Welcome to the LitCharts study guide on Min Jin Lee's Pachinko. Created by the original team behind SparkNotes, LitCharts are the world's best literature guides.

A concise biography of Min Jin Lee plus historical and literary context for Pachinko.

A quick-reference summary: Pachinko on a single page.

In-depth summary and analysis of every chapter of Pachinko. Visual theme-tracking, too.

Explanations of Pachinko's symbols, and tracking of where they appear.

An interactive data visualization of Pachinko's plot and themes.

Min Jin Lee was born in Seoul to a father who was a Korean War refugee and college-educated businessman and a mother who was the daughter of a well-known minister. After immigrating to the United States at age 7, she grew up in Elmhurst, Queens. Lee’s parents ran a wholesale jewelry shop in Manhattan’s Koreatown, where she and her sisters sometimes helped out. Lee studied history at Yale, followed by law at Georgetown. After practicing law in New York for two years, she began studying and practicing writing while raising her son. She wrote many short stories and novel drafts about the Korean diaspora as early as 1996, but her first novel, Free Food for Millionaires, was published in 2007. That same year, her family relocated to Tokyo, allowing her to collect oral histories from dozens of Koreans living in Japan, and she finished writing the draft that would be published as Pachinko. Pachinko has received many accolades, including being a finalist for the National Book Award for Fiction. Lee is currently working on her third diaspora novel, American Hagwon, and will be a writer-in-residence at Amherst College from 2019-2022.
Get the entire Pachinko LitChart as a printable PDF.
"My students can't get enough of your charts and their results have gone through the roof." -Graham S.
Download 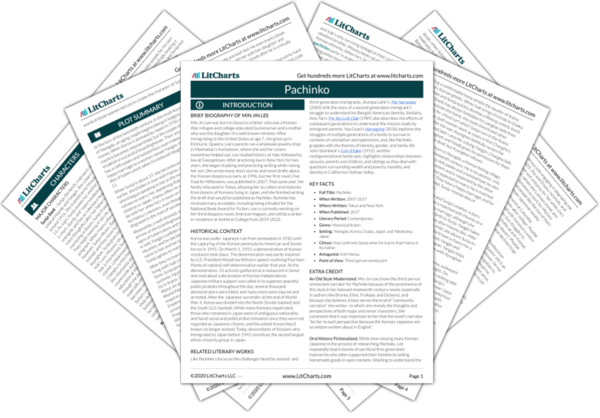 Korea was under Japanese rule from annexation in 1910 until the capturing of the Korean peninsula by American and Soviet forces in 1945. On March 1, 1919, a demonstration of Korean resistance took place. The demonstration was partly inspired by U.S. President Woodrow Wilson’s speech outlining Fourteen Points of national self-determination earlier that year. At the demonstration, 33 activists gathered at a restaurant in Seoul and read aloud a declaration of Korean independence. Japanese military support was called in to suppress peaceful public protests throughout the day; several thousand demonstrators were killed, and many more were injured and arrested. After the Japanese surrender at the end of World War II, Korea was divided into the North (Soviet-backed) and the South (U.S.-backed). While many Koreans repatriated, those who remained in Japan were of ambiguous nationality and faced social and political discrimination since they were not regarded as Japanese citizens, and the united Korea they’d known no longer existed. Today, descendants of Koreans who immigrated to Japan before 1945 constitute the second largest ethnic minority group in Japan.

Other Books Related to Pachinko

Like Pachinko’s focus on the challenges faced by second- and third-generation immigrants, Jhumpa Lahiri’s The Namesake (2003) tells the story of a second-generation immigrant’s struggle to understand his Bengali-American identity. Similarly, Amy Tan’s The Joy Luck Club (1989) also describes the efforts of subsequent generations to understand the choices made by immigrant parents. Yaa Gyasi’s Homegoing (2016) explores the struggles of multiple generations of a family to survive in contexts of colonialism and oppression, and, like Pachinko, grapples with the themes of identity, gender, and family life. John Steinbeck’s East of Eden (1952), another multigenerational family epic, highlights relationships between spouses, parents and children, and siblings as they deal with questions surrounding wealth and poverty, morality, and identity in California’s Salinas Valley.
Key Facts about Pachinko

An Old Style Modernized. Min Jin Lee chose the third-person omniscient narrator for Pachinko because of the prominence of this style in her beloved nineteenth-century novels (especially in authors like Bronte, Eliot, Trollope, and Dickens), and because she believes it best serves the kind of “community narrative” she writes—in which she reveals the thoughts and perspectives of both major and minor characters. She comments that it was important to her that the novel’s narrator “be fair to each perspective because the Korean-Japanese are so seldom written about in English.”

Oral History Fictionalized. While interviewing many Korean-Japanese in the process of researching Pachinko, Lee repeatedly heard stories of sacrificial first-generation matriarchs who often supported their families by selling homemade goods in open markets. Wanting to understand the world of these women led Lee to create the character of Sunja. 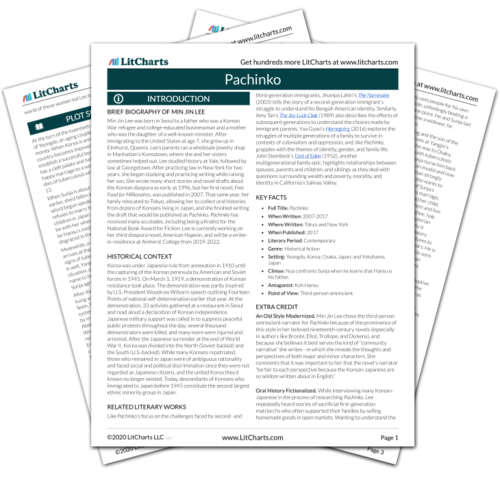 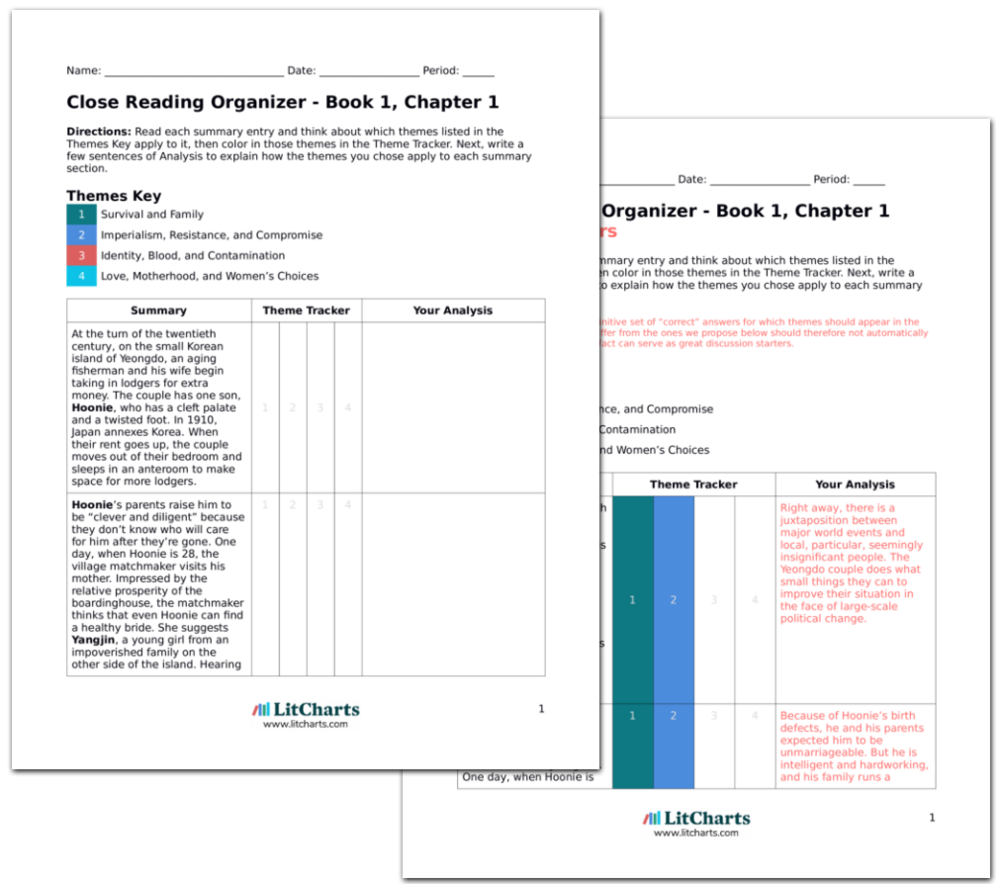