Lewis, an Oxford scholar, sets out one autumn afternoon to the home of his good friend Ransom, a Cambridge philologist. He knows that Ransom has visited Mars, where he met creatures called eldila, angelic beings that live in Deep Heaven, or space. Lewis is uneasy about the eldila and isn’t sure he wants to be drawn in to their business, but Ransom has requested his help. Ransom has explained that Earth is under siege by hostile eldila and that the good eldila of Deep Space have taken notice. On his way to Ransom’s cottage, Lewis feels an almost tangible sense of resistance and fear, but he perseveres for his friend’s sake.

That night Ransom explains to Lewis that he’s being sent to Perelandra, or Venus. Earth’s wicked eldila are planning some sort of attack on Perelandra, and Ransom is being sent to intervene, though he doesn’t know how exactly. It’s Lewis’s job to pack Ransom into his space capsule for the journey and then await his return. Lewis does as Ransom asks, and Ransom returns from space a little more than a year later. He then tells Lewis the following story.

When Ransom lands on Perelandra, he finds it to be an oceanic world of rich, muted colors; floating islands; delicious fruits; and tame, delightful creatures. On his second day there, he meets a beautiful woman who looks human in every way, except that she’s green. He and the Green Lady spend the next days discussing their different worlds. Both he and the Lady, for example, know Maleldil, or God, but God’s purposes on Earth have been different from his purposes on Perelandra. The Lady even knows that Maleldil took a human form on Earth, but because she has no concept of evil, sin, or death, she doesn’t understand that Maleldil came to Earth to redeem human beings from their sin. In fact, she has no notion of desiring anything other than what Maleldil sends—everything he gives is good, and she walks with him continually, their wills in perfect harmony. For instance, Maleldil has forbidden the Lady and her King (the only other being of her kind) from dwelling on Perelandra’s sole Fixed Land. She doesn’t know why he has forbidden this, but it’s nevertheless a joy for her to obey him.

About this point in their conversation, the Lady and Ransom notice something streaking across the sky and falling into the sea, but the Lady thinks little of it; she’s looking for her King, so they ride dolphin-like fish to the Fixed Land in search of him. When they reach it, they spot a small spaceship floating on the water, and Ransom realizes that Weston, his past nemesis and captor on Mars, has come to Perelandra. Weston’s philosophy of exploration involves enslaving or even destroying other species and planets in the effort to dominate the solar system and evade death. Ransom knows he must have been sent to Perelandra in order to thwart Weston.

Ransom and Weston meet, and Weston lectures Ransom, claiming he’s rethought his approach to interplanetary exploration. His goal in life is now the advancement of something he calls “spirituality.” He claims that science has rediscovered the inner meaning of old religious truths, and that he and Ransom hold a belief in “Spirit” in common. However, for Weston, this “Spirit” is a dark force that chose him and guides him. He argues that dualisms like “God” and the “devil” are just two pictures of that same Spirit, or Force. Further, ordinary people always get bogged down in simplistic moralism, misunderstanding and reviling those great ones who are guided by Spirit. When Ransom argues with Weston about all this, denying that their beliefs are remotely the same, Weston becomes enraged, goes into convulsions, and passes out. The next morning, Weston is gone.

Ransom rides a fish to a distant island, where he hears the Green Lady and Weston having a conversation. They’re talking about Maleldil’s prohibition of living on the Fixed Land. Weston argues that it’s a senseless prohibition, and that perhaps Maleldil wants the Lady to question his commandments. At first, the Lady isn’t interested, and Ransom takes heart. But the next day, he discovers Weston mutilating small, helpless creatures—the first suffering he has ever witnessed on Perelandra. He realizes that some diabolical life-form is inhabiting Weston’s body for the purpose of invading Perelandra and bringing about its fall into corruption.

When Ransom next finds the pair, Weston is still arguing with the Lady about Maleldil and the Fixed Land. He twists the idea of obedience, suggesting that sometimes, Maleldil wants his creatures to seem to disobey him in order to become wiser. Ransom interrupts, arguing that Maleldil wants to be obeyed simply out of love, not just when his commands seem reasonable. Over the coming days, though, Weston, whom Ransom begins to think of as the “Un-man,” tells the Lady lots of stories about misunderstood, persecuted women who undertook glorious risks for humanity’s sake. Ransom sees that Weston’s strategy is to make disobedience sound like a kind of duty that Maleldil desires from her, even though Maleldil has not told her this directly.

Ransom perceives that the fate of Perelandra—its continued innocence or its fall—rests in his hands. In light of his failed counterarguments, Ransom wonders what he can possibly do to put a stop to Weston. Gradually, as unlikely as it seems, it dawns on him that he must physically fight Weston in order to thwart his attempted corruption of the Lady and her world.

The next day, Ransom finds the Un-man and is quickly provoked into fighting him by his wanton killing of animals and his mockery of Maleldil. Ransom discovers that, despite the demonic form dwelling in Weston, he’s physically just another middle-aged scholar—meaning that Ransom has a chance. Indeed, he comes close to beating Weston, but Weston flees, and Ransom must pursue him for hours, riding a fish over the sea in a strange, lonely chase that tests his faith in Maleldil. Just before the two crash into the coast of a far distant island, Weston pulls Ransom far beneath the surface of the water. They surface on a beach, and Ransom strangles Weston in the darkness. Eventually, he realizes they’re inside a vast cavern, and he gropes his way along in the impenetrable dark for a long time. Deep inside the cave, he encounters the battered form of the Un-man once more, bashes it with a rock, and tosses it into a sea of fire. Then, after a dreamlike journey through the cavern, he collapses in exhaustion.

After a long, restorative sleep at the cavern’s mouth, Ransom sets out to explore the rest of the vast island. Eventually, he finds his way through a high pass in the mountains. In a clearing sits a familiar space capsule, and Ransom senses that eldila are nearby—the Oyarsas of Mars and Venus. The two eldila explain that the Green Lady and her King will mount their throne today—it’s the first time that two creatures in Maleldil’s image have avoided the fall into sin, instead becoming everything they were meant to be. When Ransom sees the King and Queen, he, along with the eldila, bows before them.

The King and Queen explain that they now know about evil, but that, thwarting the Un-man’s intentions, they did not learn about it by committing sin firsthand but through Maleldil’s teaching instead. The King and Queen plan to rule over Perelandra for long ages with great love. But someday, the King and the eldila of Deep Heaven will join Maleldil in relieving the siege of Earth and cleansing it of all its evils. That, he explains, will not be the “end,” but only the beginning of all things as they are meant to be—something he calls The Great Dance. After this, the King and Queen, the eldila, and Ransom proclaim Maleldil’s greatness and beauty in a long series of speeches or blessings.

At the conclusion of this ceremony, Ransom is astonished to learn that an entire year has passed. The King and Queen help him prepare for his earthward journey in the capsule and bless him, and the eldila come to carry him home. 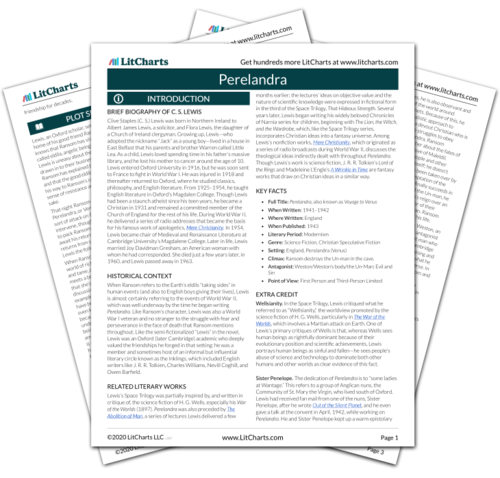 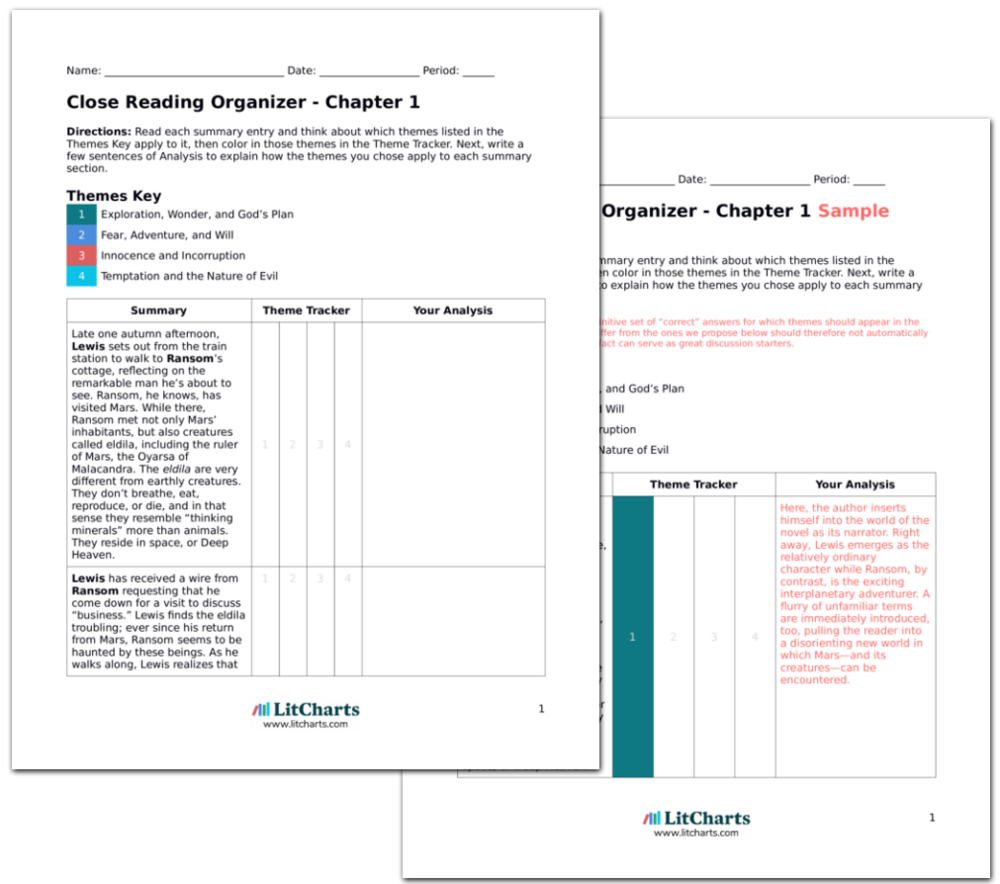