Download this LitChart! (PDF)
Teachers and parents! Struggling with distance learning? Our Teacher Edition on Philadelphia, Here I Come! can help.

Welcome to the LitCharts study guide on Brian Friel's Philadelphia, Here I Come!. Created by the original team behind SparkNotes, LitCharts are the world's best literature guides.

A concise biography of Brian Friel plus historical and literary context for Philadelphia, Here I Come!.

A quick-reference summary: Philadelphia, Here I Come! on a single page.

In-depth summary and analysis of every act of Philadelphia, Here I Come!. Visual theme-tracking, too.

Explanations, analysis, and visualizations of Philadelphia, Here I Come!'s themes.

Description, analysis, and timelines for Philadelphia, Here I Come!'s characters.

Explanations of Philadelphia, Here I Come!'s symbols, and tracking of where they appear.

An interactive data visualization of Philadelphia, Here I Come!'s plot and themes.

Brian Friel was born in Northern Ireland in 1929, the son of a primary school principal and a postmistress. Friel’s grandparents were illiterate and served as inspiration for the tension between rural and progressive Ireland throughout Friel’s work. After an unhappy stint at the National Seminary, Friel attended a teacher’s college in Belfast and taught for 10 years. He transitioned to writing full time after publishing multiple short stories in The New Yorker. Friel was propelled to international success following the 1964 transfer of his play Philadelphia, Here I Come! to Broadway. A Northern Irish Catholic Nationalist, Friel participated in an Irish civil rights march in 1972 during which British soldiers infamously shot and killed 14 civilians; the event that became known as Bloody Sunday. Apart from The Freedom of the City, however, Friel largely avoided direct reference to politics in his work, choosing instead to focus on a broader sense of isolation and disenfranchisement. In 1980 Friel co-founded the Field Day Theatre Company in Northern Ireland; his play Translations was the group’s first production. Now considered one of the greatest Irish playwrights and short story writers, Friel earned multiple Tony, Olivier, and Drama Desk nominations and awards during his career, which spanned more than half a century. Friel was intensely private and rarely offered the public glimpses into his private life. He married Anne Morrison in 1954 and had five children—four daughters and one son. Friel died in 2015 in County Donegal at the age of 86.
Get the entire Philadelphia, Here I Come! LitChart as a printable PDF.
"My students can't get enough of your charts and their results have gone through the roof." -Graham S.
Download 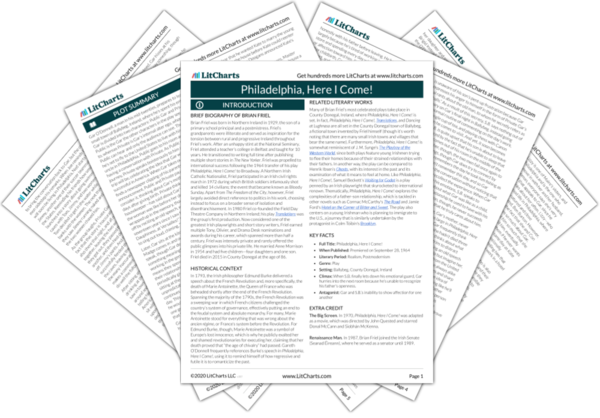 In 1793, the Irish philosopher Edmund Burke delivered a speech about the French Revolution and, more specifically, the death of Marie Antoinette, the Queen of France who was beheaded shortly after the end of the French Revolution. Spanning the majority of the 1790s, the French Revolution was a sweeping war in which French citizens challenged the country’s system of governance, effectively putting an end to the feudal system and absolute monarchy. For many, Marie Antoinette stood for everything that was wrong about the ancien régime, or France’s system before the Revolution. For Edmund Burke, though, Marie Antoinette was a symbol of Europe’s lost innocence, which is why he publicly exalted her and shamed revolutionaries for executing her, claiming that her death proved that “the age of chivalry” had passed. Gareth O’Donnell frequently references Burke’s speech in Philadelphia, Here I Come!, using it to remind himself of how regressive and futile it is to romanticize the past.

Other Books Related to Philadelphia, Here I Come!

The Big Screen. In 1970, Philadelphia, Here I Come! was adapted as a movie, which was directed by John Quested and starred Donal McCann and Siobhán McKenna.

Renaissance Man. In 1987, Brian Friel joined the Irish Senate (Seanad Éireann), where he served as a senator until 1989. 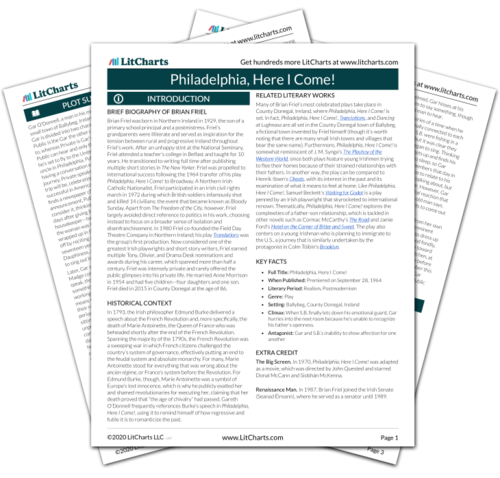 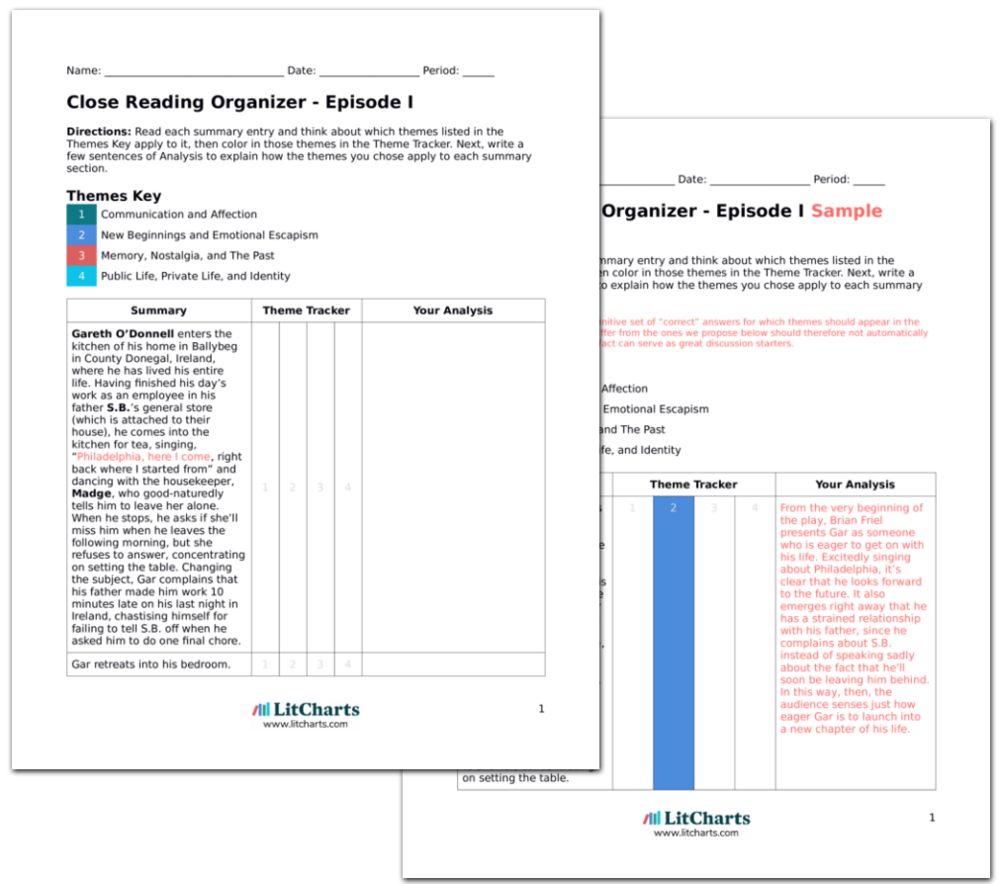