As the novel draws the reader deeper into the political divisions within the scythe organization and specifically, after Citra and Rowan are taken on by Scythe Curie and Scythe Goddard respectively, Scythe asks a number of questions about morality and human nature. By comparing the different licensed scythes and how they choose to train their apprentices, Scythe considers whether or not behaving morally and compassionately is something a person will do when there are few or no consequences for behaving otherwise, as well as what it even means to be compassionate in their line of work.

Prior to becoming apprentices, neither Citra nor Rowan think particularly highly of scythes. They generally find them cruel, unfeeling, and at times, not even especially human because their job is to kill others, something that Citra and Rowan don't find positive or moral. However, the scythe journal entries of Scythe Curie, which appear at the beginnings of most chapters, paint a different picture of what it means to be a good scythe in a moral sense. Curie meditates often on whether or not she's doing a good job and is compassionate enough to her victims and their families. When Scythe Faraday takes Citra and Rowan on as his apprentices, he confirms that, as far as he's concerned, Curie has the right idea: a good scythe is a compassionate scythe who doesn't think that killing people is good or right.

Both Scythe Curie and Scythe Faraday are meticulous in their methods, something that they believe allows them to be as compassionate as possible. Curie believes that gleaning should mimic death from the Age of Mortality, so she gives her victims no time to prepare—but then cooks her victims' families dinner the night after and provides them some closure. Faraday, on the other hand, diligently and empirically chooses his methods of killing as well as his victims, as he believes that people are all individuals and deserve to die in a way that aligns with who they are. He also attends every funeral for the people he gleans. This suggests that, as far as Faraday and Curie are concerned, compassion is something that comes with research and attention to detail. Essentially, it's something that they can develop when they take a keen interest in their victims and the victims' families, which in turn makes every death a personal, devastating experience for the scythe as well.

Following Scythe Faraday's (supposed) self-gleaning, after which Scythe Curie takes on Citra while Scythe Goddard takes over Rowan's training, Rowan discovers that not all scythes are as moral or as kind as Faraday was. While Citra continues to learn compassion first and foremost, Goddard, who is known for bloody, violent mass gleanings, teaches Rowan to enjoy killing and dehumanize his victims. Thanks to Rowan's innately compassionate personality as well as to his early training with Faraday, he's well aware that Goddard is turning him into a monster and a "killing machine," rather than a person performing a horrifying yet necessary service to humanity. The novel does imply, however, that despite Rowan's training and the awful things that Goddard makes him do, Rowan is able to maintain a sense of moral righteousness by choosing, at various points, to exercise his compassion and help potential victims of Goddard's crew escape. This creates the possibility that while a person's sense of morality is partially something innate and partially something learned, the true marker of morality is whether or not a person chooses to exercise his or her compassion—Rowan, after his training, admits in his inner monologue that he has become a monster and does enjoy killing, but he still chooses to ultimately use this transformation for good by gleaning Goddard and Goddard's cronies. Further, after becoming a scythe, Citra hears of a rogue, unordained scythe known as Scythe Lucifer—whom she knows is Rowan—who takes out corrupt scythes with what he learned from Goddard. With this, Scythe suggests that while anyone is capable of becoming a compassionless monster like Goddard, it's also possible for anyone to use the exact same skills and thought processes to create positive change in the world. 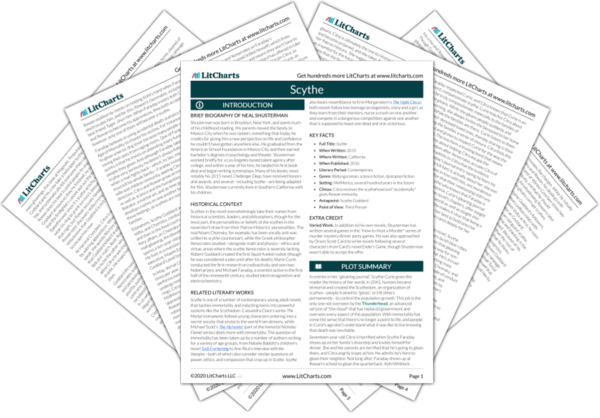 Below you will find the important quotes in Scythe related to the theme of Morality, Compassion, and Choices.
Chapter 1 Quotes

Perhaps that is why we must, by law, keep a record. A public journal, testifying to those who will never die and those who are yet to be born, as to why we human beings do the things we do. We are instructed to write down not just our deeds but our feelings, because it must be known that we do have feelings. Remorse. Regret. Sorrow too great to bear. Because if we didn't feel those things, what monsters would we be?

Suddenly Kohl thrust his hand out, grabbing Rowan's and holding it tightly. Rowan allowed it. He wasn't family; he wasn't even Kohl's friend before today—but what was the saying? Death makes the whole world kin. Rowan wondered if a world without death would then make everyone strangers.

She assumed she would go to college, get a degree in something pleasant, then settle into a comfortable job, meet a comfortable guy, and have a nice, unremarkable life. It's not that she longed for such an existence, but it was expected. Not just of her, but of everyone. With nothing to really aspire to, life had become about maintenance.

They removed their raincoats to reveal robes of all colors, all textures. It was a rainbow that summoned forth anything but thoughts of death. This, Citra realized, was intentional. Scythes wished to be seen as the many facets of light, not of darkness.

"Never lose your humanity," Scythe Faraday had told him, "or you'll be nothing more than a killing machine." He had used the word "killing" rather than "gleaning." Rowan hadn't thought much of it at the time, but now he understood; it stopped being gleaning the moment one became desensitized to the act.

"Embrace it, Rowan. Suckle at its transformative breast. You may think gleaning is an acquired taste, but it's not. The thrill of the hunt and the joy of the kill simmers in all of us. Bring it to the surface and then you'll be the kind of scythe this world needs."

My greatest wish for humanity is not for peace or comfort or joy. It is that we all still die a little inside every time we witness the death of another. For only the pain of empathy will keep us human. There's no version of God that can help us if we ever lose that.

It was then it occurred to her that every scythe, since the Scythedom began, had to take this test. Every single one of them was forced to take the life of someone they loved. Yes, that person would be revived, but it didn't change the cold-blooded act. A person's subconscious mind can't differentiate between permanent and temporary killings. 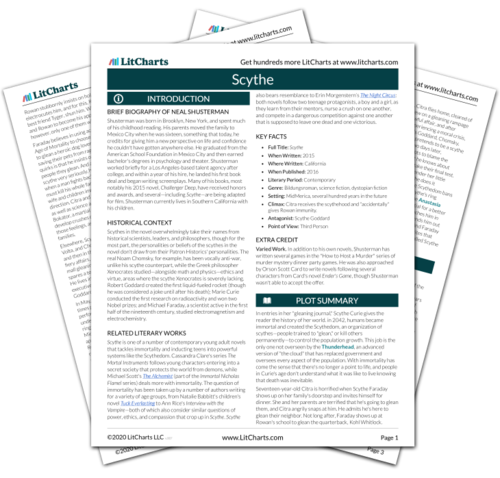 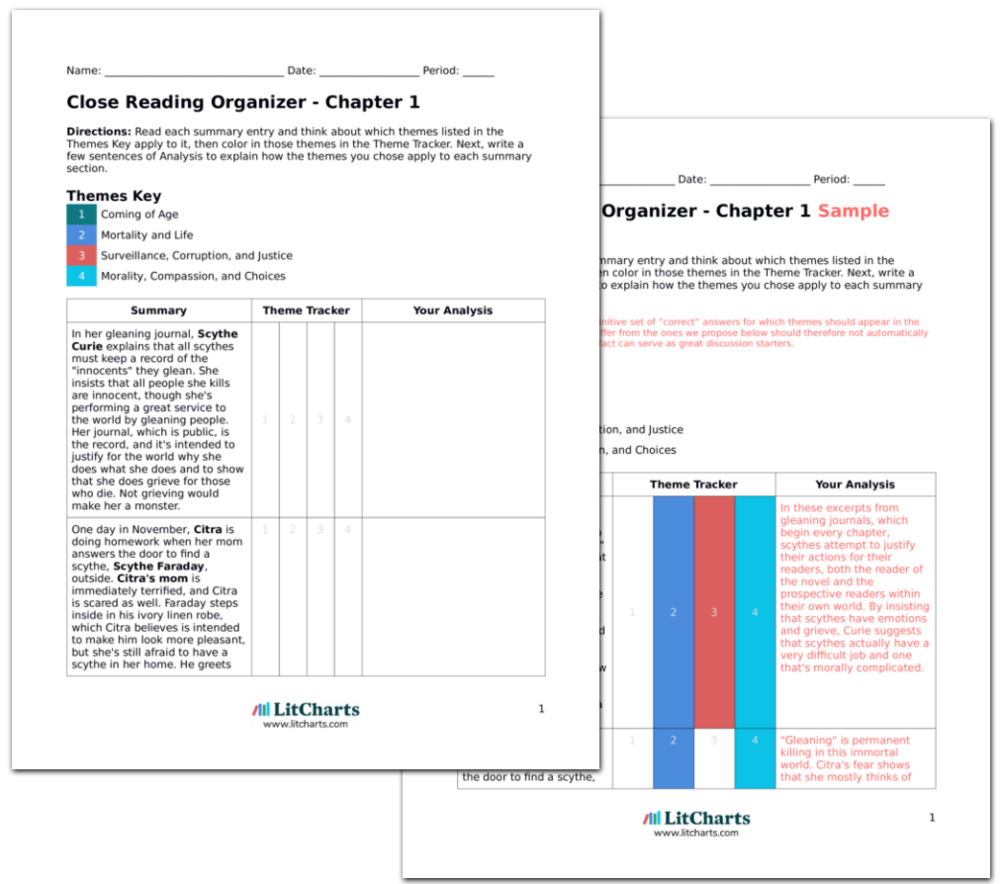