Sizwe Bansi Is Dead, a play set in apartheid South Africa, illustrates how wealth gives individuals agency in capitalist societies. South Africa’s apartheid laws enforced a racist social hierarchy by not only restricting Black South Africans’ legal rights but also preventing them from accumulating wealth, which would allow them more agency and ability to help one another. The play’s title character, Sizwe Bansi, leaves his rural home in King William’s Town because he can find no employment opportunities there but wants to support his family. When he travels to the urban area of Port Elizabeth, however, he discovers that he lacks the permits that South Africa’s white-run bureaucracy legally requires of a Black man who wants to live and work in a new place. By restricting where Sizwe can work, apartheid law prevents him from earning money and deprives him of the ability to support his family. The play’s other main characters, Buntu and Styles, have also suffered economic hardship and compromised agency due to apartheid’s racist hierarchies. For instance, the (presumptively white) people who employ Buntu’s wife as a live-in maid only allow her to return home on weekends. Buntu’s child lives with Buntu’s mother; it’s implied that Buntu and his wife work too much to look after the child. This situation shows how Buntu’s family can’t choose to stay together because they lack the wealth that could allow them to do so. Meanwhile, Styles used to work in an automobile factory where white bosses forced him to work under dangerous conditions for 18 hours a day; it was only when he quit that job and began working as a photographer for (the play implies) an exclusively non-white clientele that he began to feel like a person in control of his life. Through its examination of the hardships its central characters endure, the play demonstrates that a person needs money to have agency in a capitalist society; as such, the play ultimately suggests that hindering Black South Africans who tried to accumulate wealth was one of the central ways that apartheid laws reinforced white supremacy.

The ThemeTracker below shows where, and to what degree, the theme of Racial Hierarchies and Wealth Inequality appears in each chapter of Sizwe Bansi Is Dead. Click or tap on any chapter to read its Summary & Analysis.
How often theme appears:
chapter length:
Chapter
Sizwe Bansi Is Dead
Get the entire Sizwe Bansi Is Dead LitChart as a printable PDF.
"My students can't get enough of your charts and their results have gone through the roof." -Graham S.
Download 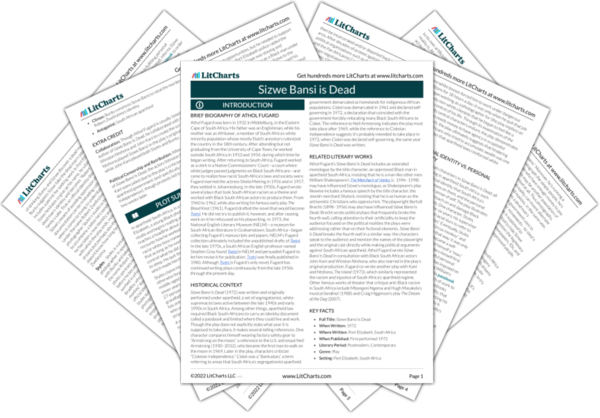 STYLES: That was my moment, man. Kneeling there on the floor . . . foreman, general foreman, plant supervisor, plant manager . . . and Styles? Standing!

STYLES: I took a good look at my life. What did I see? A bloody circus monkey! Selling most of his time on earth to another man. Out of every twenty-four hours I could only properly call mine the six when I was sleeping. What the hell is the use of that? 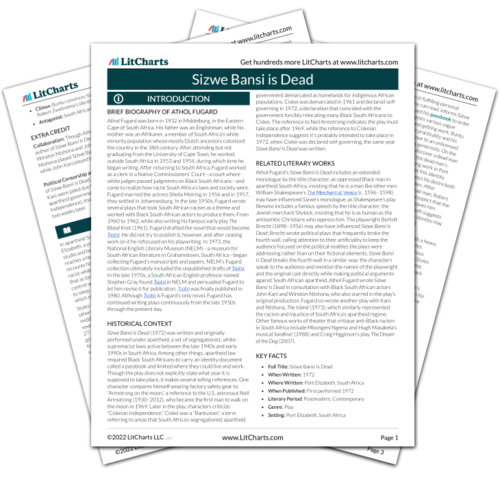 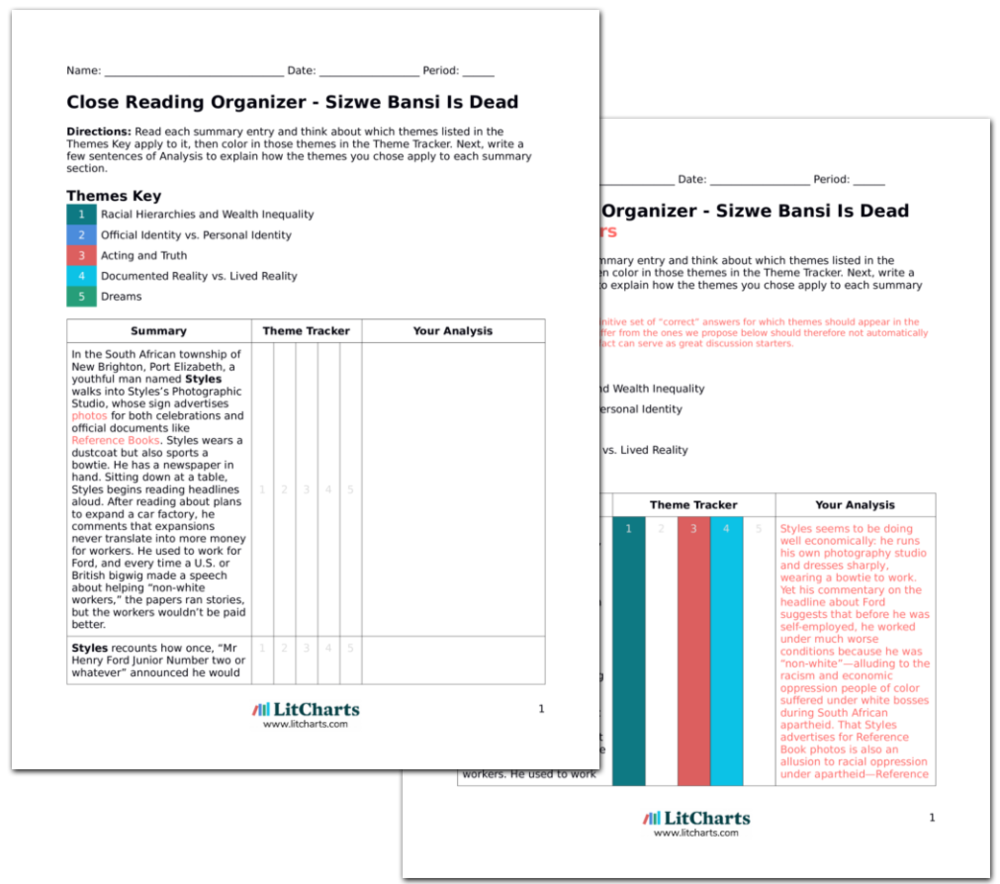