Download this LitChart! (PDF)
Teachers and parents! Struggling with distance learning? Our Teacher Edition on Speech Sounds can help.

Welcome to the LitCharts study guide on Octavia E. Butler's Speech Sounds. Created by the original team behind SparkNotes, LitCharts are the world's best literature guides.

A concise biography of Octavia E. Butler plus historical and literary context for Speech Sounds.

A quick-reference summary: Speech Sounds on a single page.

In-depth summary and analysis of every of Speech Sounds. Visual theme-tracking, too.

Explanations of Speech Sounds's symbols, and tracking of where they appear.

An interactive data visualization of Speech Sounds's plot and themes.

Octavia Butler was born in Pasadena in 1947. After her father died, Butler was raised by her mother, a housemaid, and her grandmother. She learned about racial discrimination by observing how they were mistreated by their white employers. Butler spent much of her childhood reading and writing, going on to attend Pasadena City College, various UCLA extension courses, and finally the prestigious Clarion Workshop for science-fiction writing. She became the first science-fiction writer to be awarded the MacArthur Fellowship, also winning Nebula and Hugo awards for her stories. In her writing, Butler wanted to critique sexism, racism, and classism in society. She wrote protagonists who defied these norms, using their differences as sources of power, rather than weakness. She also used the science-fiction genre to reimagine class and ethnicity and to explore alternative systems of power. Butler liked writing survival stories, imagining how moments of victory for the already disenfranchised could lead to societal change. Later in life, she struggled with depression and writer’s block. Butler died of a stroke at 58 in her Washington home.
Get the entire Speech Sounds LitChart as a printable PDF.
"My students can't get enough of your charts and their results have gone through the roof." -Graham S.
Download 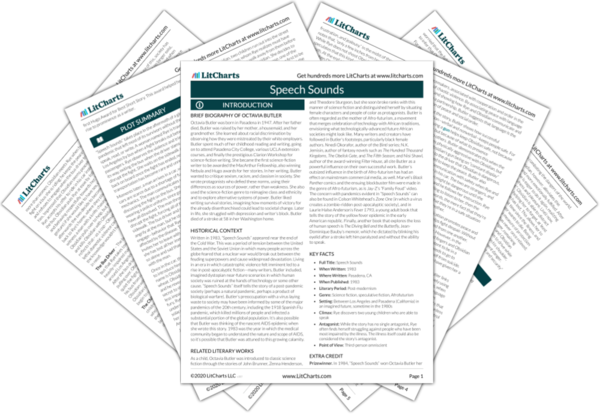 Written in 1983, “Speech Sounds” appeared near the end of the Cold War. This was a period of tension between the United States and the Soviet Union in which many people across the globe feared that a nuclear war would break out between the feuding superpowers and cause widespread devastation. Living in an era in which catastrophic violence felt imminent led to a rise in post-apocalyptic fiction—many writers, Butler included, imagined dystopian near-future scenarios in which human society was ruined at the hands of technology or some other cause. “Speech Sounds” itself tells the story of a post-pandemic society (perhaps a natural pandemic, perhaps a product of biological warfare). Butler’s preoccupation with a virus laying waste to society may have been informed by some of the major pandemics of the 20th century, including the 1918 Spanish Flu pandemic, which killed millions of people and infected a substantial portion of the global population. It’s also possible that Butler was thinking of the nascent AIDS epidemic when she wrote this story. 1983 was the year in which the medical community began to understand the nature and scope of AIDS, so it’s possible that Butler was attuned to this growing calamity.

Other Books Related to Speech Sounds

As a child, Octavia Butler was introduced to classic science fiction through the stories of John Brunner, Zenna Henderson, and Theodore Sturgeon, but she soon broke ranks with this manner of science fiction and distinguished herself by situating female characters and people of color as protagonists. Butler is often regarded as the mother of Afro-futurism, a movement that merges celebration of technology with African traditions, envisioning what technologically-advanced future African societies might look like. Many writers and creators have followed in Butler’s footsteps, particularly black female authors. Nnedi Okorafor, author of the Binti series; N.K. Jemisin, author of fantasy novels such as The Hundred Thousand Kingdoms, The Obelisk Gate, and The Fifth Season; and Nisi Shawl, author of the award-winning Filter House, all cite Butler as a powerful influence on their own successful work. Butler’s outsized influence in the birth of Afro-futurism has had an effect on mainstream commercial media, as well. Marvel’s Black Panther comics and the ensuing blockbuster film were made in the genre of Afro-futurism, as is Jay-Z’s “Family Feud” video. The concern with pandemics evident in “Speech Sounds” can also be found in Colson Whitehead’s Zone One (in which a virus creates a zombie-ridden post-apocalyptic society), and in Laurie Halse Anderson’s Fever 1793, a young adult book that tells the story of the yellow fever epidemic in the early American republic. Finally, another book that explores the loss of human speech is The Diving Bell and the Butterfly, Jean-Dominique Bauby’s memoir, which he dictated by blinking his eyelid after a stroke left him paralyzed and without the ability to speak.
Key Facts about Speech Sounds

Prizewinner. In 1984, “Speech Sounds” won Octavia Butler her first Hugo Award for Best Short Story. This award helped her rise to prominence as a writer. 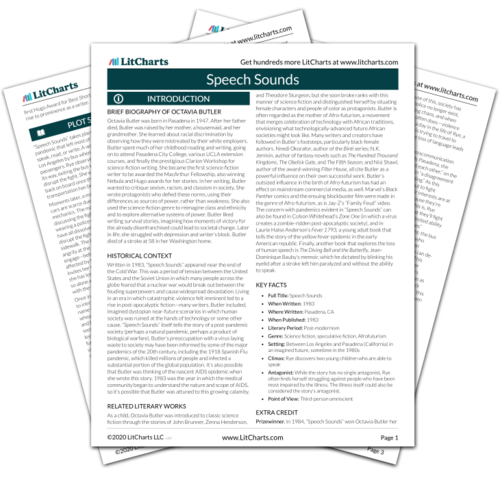 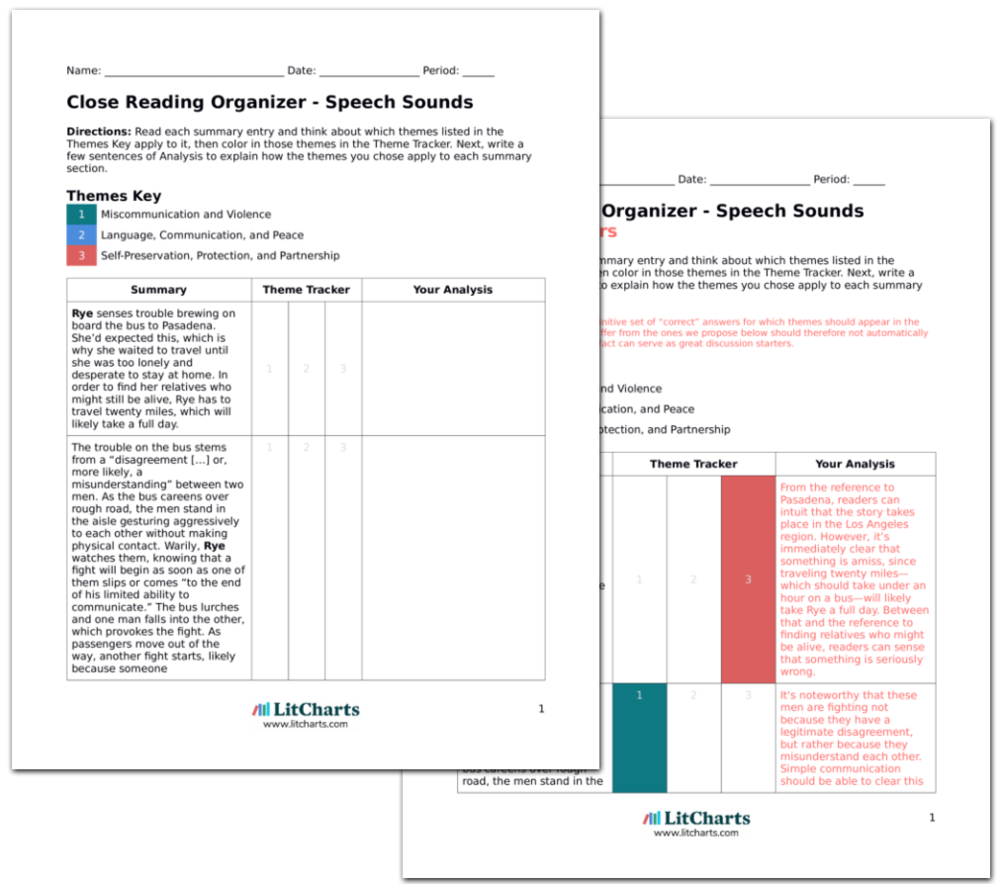