Download this LitChart! (PDF)
Teachers and parents! Struggling with distance learning? Our Teacher Edition on Sweet Bird of Youth can help.

Welcome to the LitCharts study guide on Tennessee Williams's Sweet Bird of Youth. Created by the original team behind SparkNotes, LitCharts are the world's best literature guides.

A concise biography of Tennessee Williams plus historical and literary context for Sweet Bird of Youth.

A quick-reference summary: Sweet Bird of Youth on a single page.

In-depth summary and analysis of every act of Sweet Bird of Youth. Visual theme-tracking, too.

Explanations, analysis, and visualizations of Sweet Bird of Youth's themes.

Description, analysis, and timelines for Sweet Bird of Youth's characters.

Explanations of Sweet Bird of Youth's symbols, and tracking of where they appear.

An interactive data visualization of Sweet Bird of Youth's plot and themes.

Born in Columbus, Mississippi, Williams moved to St. Louis, Missouri as a child. Williams’s literary career began early: at age sixteen, he won five dollars for an essay entitled “Can a Good Wife be a Good Sport?” Williams attended the University of Missouri, where he frequently entered writing contests as a source of extra income. But after Williams failed military training during junior year, his father pulled him out of college and put him to work in a factory. At age twenty-four, Williams suffered a nervous breakdown, left his job, and returned to college, studying at Washington University in St. Louis but finally graduating from the University of Iowa in 1938. Williams lived in the French Quarter of New Orleans in 1939, writing for the Works Progress Administration. He later traveled to Hollywood to work as a screenwriter. It was also in the late ’30s that Williams came out as a gay man. Although he had several serious long-term relationships, many of Williams’s romantic affairs were negatively influenced by his addiction to amphetamines, which he tried to use as a way of treating his depression. The playwright eventually died in New York after accidentally choking on a bottle cap. Still, he left behind over 30 plays, including well-known pieces like A Streetcar Named Desire, The Glass Menagerie, and Cat on a Hot Tin Roof. His legacy as a prolific and fearless writer endures to this day.
Get the entire Sweet Bird of Youth LitChart as a printable PDF.
"My students can't get enough of your charts and their results have gone through the roof." -Graham S.
Download 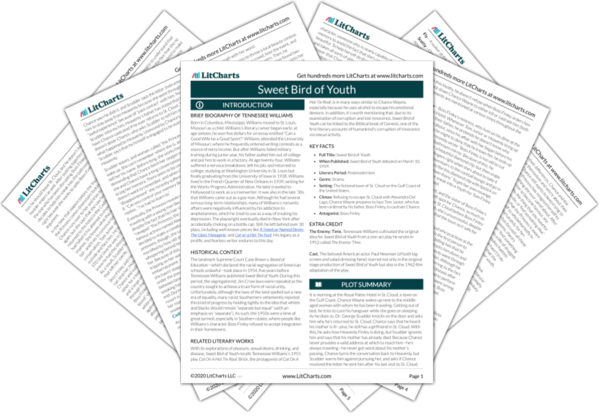 The landmark Supreme Court Case Brown v. Board of Education—which declared the racial segregation of American schools unlawful—took place in 1954, five years before Tennessee Williams published Sweet Bird of Youth. During this period, the segregationist Jim Crow laws were repealed as the country sought to achieve a truer form of racial unity. Unfortunately, although the laws of the land spelled out a new era of equality, many racist Southerners vehemently rejected this kind of progress by holding tightly to the idea that whites and blacks should remain “separate but equal” (with an emphasis on “separate”). As such, the 1950s were a time of great turmoil, especially in Southern states, where people like Williams’s character Boss Finley refused to accept integration in their hometowns.

Other Books Related to Sweet Bird of Youth

With its explorations of pleasure, sexual desire, drinking, and disease, Sweet Bird of Youth recalls Tennessee Williams’s 1955 play Cat On A Hot Tin Roof. Brick, the protagonist of Cat On A Hot Tin Roof, is in many ways similar to Chance Wayne, especially because he uses alcohol to escape his emotional demons. In addition, it’s worth mentioning that, due to its examination of corruption and lost innocence, Sweet Bird of Youth can be linked to the Biblical book of Genesis, one of the first literary accounts of humankind’s corruption of innocence via sexual activity.
Key Facts about Sweet Bird of Youth

The Enemy: Time. Tennessee Williams cultivated the original idea for Sweet Bird of Youth from a one-act play he wrote in 1952 called The Enemy: Time.

Cast. The beloved American actor Paul Newman (of both big-screen and salad-dressing fame) starred not only in the original stage production of Sweet Bird of Youth but also in the 1962 film adaptation of the play. 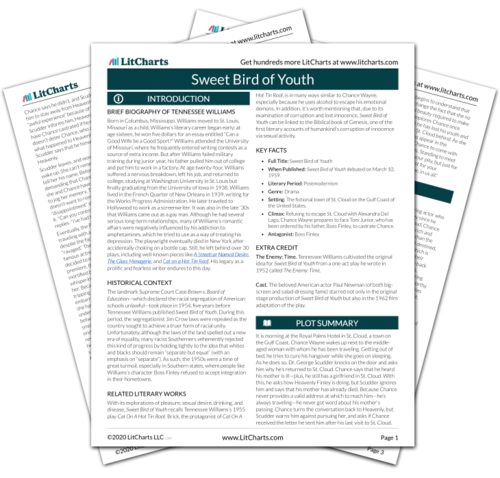 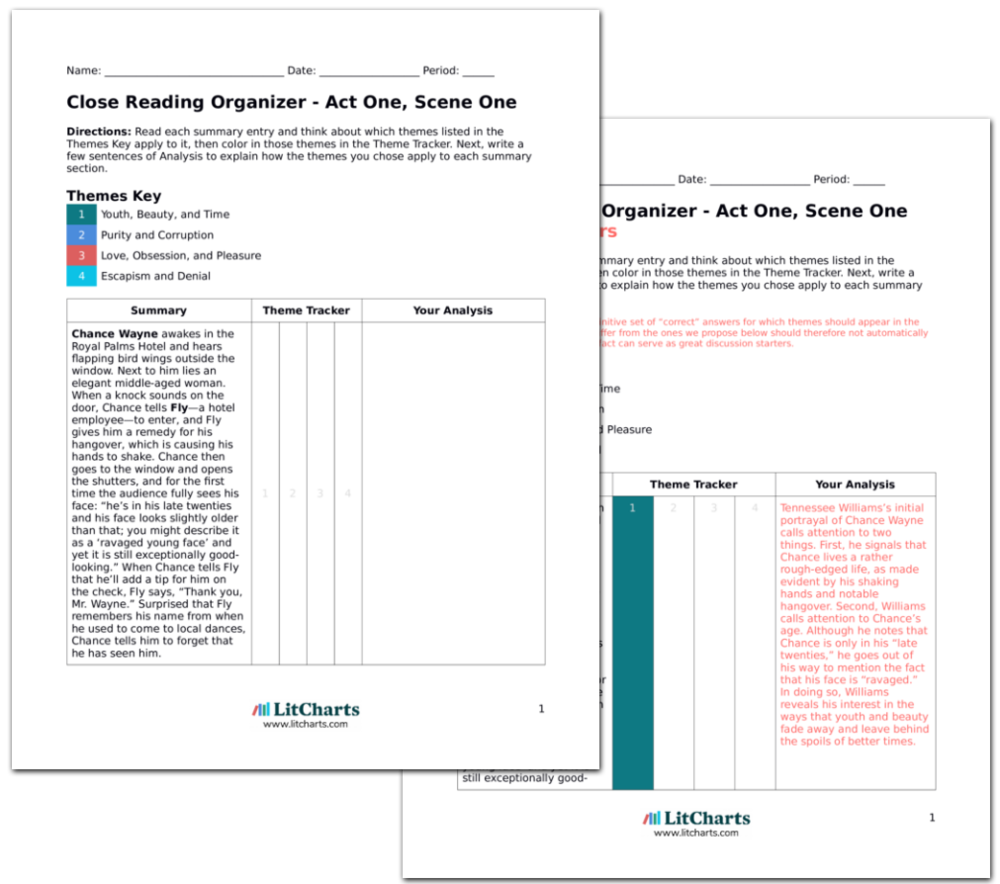