Welcome to the LitCharts study guide on Anonymous's The Bhagavad Gita. Created by the original team behind SparkNotes, LitCharts are the world's best literature guides.

A concise biography of Anonymous plus historical and literary context for The Bhagavad Gita.

A quick-reference summary: The Bhagavad Gita on a single page.

In-depth summary and analysis of every discourse of The Bhagavad Gita. Visual theme-tracking, too.

Explanations, analysis, and visualizations of The Bhagavad Gita's themes.

Description, analysis, and timelines for The Bhagavad Gita's characters.

Description, analysis, and timelines for The Bhagavad Gita's terms.

Explanations of The Bhagavad Gita's symbols, and tracking of where they appear.

An interactive data visualization of The Bhagavad Gita's plot and themes.

The Bhagavad Gita’s authorship is uncertain and widely debated, but the entire Mahabharata (of which the Gita forms a part) was certainly passed down through various oral traditions before a number of standardized written versions emerged many hundreds of years later. However, scholars have suggested that the Gita was originally a separate text from the Mahabharata and inserted into the longer epic later on. Conventionally, the Mahabharata’s composer is identified as Vyasa, an ancient, immortal, legendary poet who appears in the epic as the Pandavas’ and Kauravas’ grandfather and who ostensibly dictated it to the god Ganesha. Vyasa is said to have grown up in the forests of northern India as the son of a sage and the princess Satyavati, who was raised as a commoner by a fisherman. In the forests, hermits taught him the Vedas, the earliest Sanskrit scriptures of Hinduism, which he compiled and divided into their contemporary four-part form. Later in his life, Vyasa supposedly lived on the banks of the mythic Sarasvati river and in Himalayan caves, where the Mahabharata was ostensibly composed. Some branches of Hinduism consider him a worldly incarnation of Vishnu (like Krishna).
Get the entire The Bhagavad Gita LitChart as a printable PDF.
"My students can't get enough of your charts and their results have gone through the roof." -Graham S.
Download 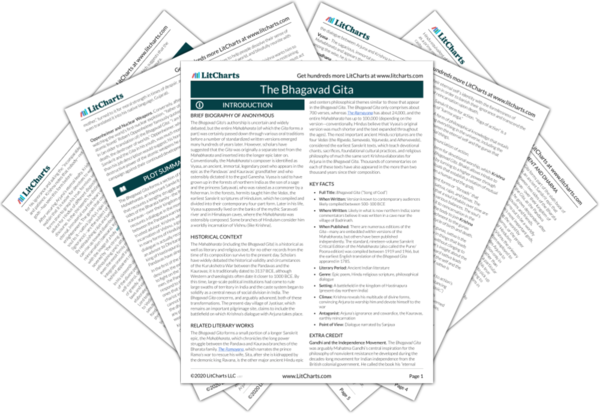 Historical Context of The Bhagavad Gita

The Mahabharata (including the Bhagavad Gita) is a historical as well as literary and religious text, for no other records from the time of its composition survive to the present day. Scholars have widely debated the historical validity and circumstances of the Kurukshetra War between the Pandavas and the Kauravas; it is traditionally dated to 3137 BCE, although Western archaeologists often date it closer to 1000 BCE. By this time, large-scale political institutions had come to rule large swaths of territory in India and the caste system began to solidify as a central nexus of social division in India. The Bhagavad Gita concerns, and arguably advanced, both of these transformations. The present-day village of Jyotisar, which remains an important pilgrimage site, claims to include the battlefield on which Krishna’s dialogue with Arjuna takes place.

Other Books Related to The Bhagavad Gita

The Bhagavad Gita forms a small portion of a longer Sanskrit epic, the Mahabharata, which chronicles the long power struggle between the Pandava and Kaurava branches of the Bharata family. The Ramayana, which narrates the prince Rama’s war to rescue his wife, Sita, after she is kidnapped by the demonic king Ravana, is the other major ancient Hindu epic and centers philosophical themes similar to those that appear in the Bhagavad Gita. The Bhagavad Gita only comprises about 700 verses, whereas The Ramayana has about 24,000, and the entire Mahabharata has up to 100,000 (depending on the version—conventionally, Hindus believe that Vyasa’s original version was much shorter and the text expanded throughout the ages). The most important ancient Hindu scriptures are the four Vedas (the Rigveda, Samaveda, Yajurveda, and Atharvaveda), considered the earliest Sanskrit texts, which teach devotional chants, sacrifices, foundational cultural practices, and religious philosophy of much the same sort Krishna elaborates for Arjuna in the Bhagavad Gita. Thousands of commentaries on each of these texts have also appeared in the more than two thousand years since their composition.
Key Facts about The Bhagavad Gita

Extra Credit for The Bhagavad Gita

Gandhi and the Independence Movement. The Bhagavad Gita was arguably Mahatma Gandhi’s central inspiration for the philosophy of nonviolent resistance he developed during the decades-long movement for Indian independence from the British colonial government. He called the book his “eternal mother,” turned to it for moral strength in times of despair, and even translated it into his native language, Gujarati.

Oppenheimer and Nuclear Weapons. Conversely, after watching the world’s first nuclear explosion, “father of the atomic bomb” Robert Oppenheimer famously quoted Krishna in (an older translation of) the Bhagavad Gita: “I am become death, the destroyer of worlds.” Oppenheimer, who studied Sanskrit and the Gita in his youth, was much more of a pacifist than his job description would suggest; his horror at the destructive power of the atomic weapons he created led him to campaign against their continued development later in his life.