Download this LitChart! (PDF)
Teachers and parents! Struggling with distance learning? Our Teacher Edition on The Bonesetter’s Daughter can help.

Welcome to the LitCharts study guide on Amy Tan's The Bonesetter’s Daughter. Created by the original team behind SparkNotes, LitCharts are the world's best literature guides.

A concise biography of Amy Tan plus historical and literary context for The Bonesetter’s Daughter.

A quick-reference summary: The Bonesetter’s Daughter on a single page.

In-depth summary and analysis of every chapter of The Bonesetter’s Daughter. Visual theme-tracking, too.

Explanations, analysis, and visualizations of The Bonesetter’s Daughter's themes.

Description, analysis, and timelines for The Bonesetter’s Daughter's characters.

Explanations of The Bonesetter’s Daughter's symbols, and tracking of where they appear.

An interactive data visualization of The Bonesetter’s Daughter's plot and themes.

Amy Tan was born in 1952 in Oakland, California, to Chinese immigrants. Tan lived with her family in the Oakland area until high school, when her older brother and father died of brain tumors within a year of each other. Fearing a curse, Tan’s mother uprooted Tan and her younger brother from their home, and the three of them traveled throughout Europe, eventually ending up in Switzerland. Tan has spoken publicly about her fraught relationship with her mother, who was often suicidal. When Tan was a teenager, her mother attempted to kill Tan, her brother, and herself so that they could reunite with Tan’s deceased father and brother. Tan returned to the U.S. to attend college, graduating from San José State University with degrees in English and linguistics. She then worked as a freelance business writer and began writing fiction in 1985. Her first story was published in 1986 in the literary magazine FM Five. She eventually received multiple offers to publish a collection of her short stories. This project developed into a novel, The Joy Luck Club, which was published in 1989. A film adaptation of The Joy Luck Club, for which Tan served as co-producer and co-screenwriter, was released in 1993. Tan’s other novels include The Kitchen God’s Wife, The Hundred Secret Senses, The Bonesetter’s Daughter, Saving Fish from Drowning, and The Valley of Amazement. Her works draw from her own experiences and her mother’s life in China, and she often explores the tensions between American daughters and their immigrant mothers. Tan’s essays and short stories are frequently anthologized, and she has been nominated for numerous awards throughout her career, including the National Book Award and the National Book Critics Circle Award. She has lectured internationally at universities and appeared as herself on The Simpsons and Sesame Street. Tan lives with her husband and their dogs near San Francisco.
Get the entire The Bonesetter’s Daughter LitChart as a printable PDF.
"My students can't get enough of your charts and their results have gone through the roof." -Graham S.
Download 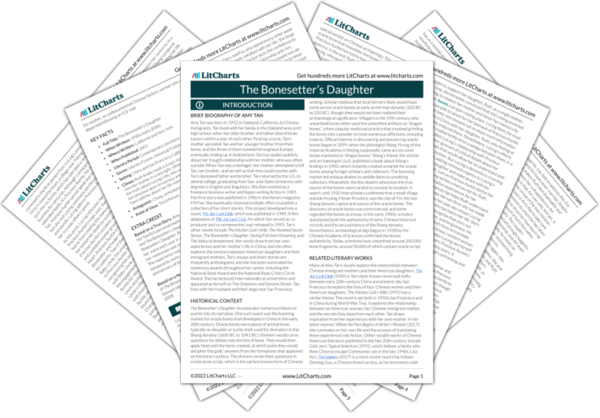 Historical Context of The Bonesetter’s Daughter

The Bonesetter’s Daughter incorporates numerous historical events into its narrative. One such event was the booming market for oracle bones that developed in China in the early 20th century. Oracle bones were pieces of animal bone, typically ox shoulder or turtle shell, used for divination in the Shang dynasty (1600 BC to 1041 BC). Diviners would carve questions for deities into the bits of bone. They would then apply heat until the bone cracked, at which point they would decipher the gods’ answers from the formations that appeared on the bone’s surface. The diviners wrote their questions in oracle bone script, which is the earliest known form of Chinese writing. Scholars believe that local farmers likely would have come across oracle bones as early as the Han dynasty (202 BC to 220 BC), though they would not have realized their archaeological significance. Villagers in the 19th century who unearthed bones often used the unearthed artifacts as “dragon bones,” a then-popular medicinal practice that involved grinding the bones into a powder to treat numerous afflictions, including malaria. Official interest in discovering and preserving oracle bones began in 1899, when the philologist Wang Yirong of the Imperial Academy in Beijing supposedly came across some bones marketed as “dragon bones.” Wang’s friend, the scholar and archaeologist Liu E, published a book about Wang’s findings in 1903, which instantly created a market for oracle bones among foreign scholars and collectors. The booming market led antique dealers to peddle fakes to unwitting collectors. Meanwhile, the few dealers who knew the true source of the bones were careful to conceal its location. It wasn’t until 1910 that scholars confirmed that a small village outside Anyang, Henan Province, was the site of Yin, the last Shang dynasty capital and source of the oracle bones. The discovery of oracle bones was controversial, and some regarded the bones as a hoax. In the early 1900s, scholars questioned both the authenticity of early Chinese historical records and the very existence of the Shang dynasty. Nevertheless, archaeological digs begun in 1928 by the Chinese Academy of Sciences confirmed the bones’ authenticity. Today, scientists have unearthed around 200,000 bone fragments, around 50,000 of which contain oracle script.

Other Books Related to The Bonesetter’s Daughter

Many of Amy Tan’s novels explore the relationships between Chinese immigrant mothers and their American daughters. The Joy Luck Club (1989) is Tan’s best-known novel and shifts between early 20th-century China and present-day San Francisco to explore the lives of four Chinese women and their American daughters. The Kitchen God’s Wife (1991) has a similar theme. The novel is set both in 1990s San Francisco and in China during World War Two. It explores the relationship between an American woman, her Chinese immigrant mother, and the secrets they keep from each other. Tan draws inspiration from her experiences with her own mother. In her latest memoir, Where the Past Begins: A Writer’s Memoir (2017), she ruminates on her own life and the process of translating those experiences into fiction. Other notable works of Chinese American literature published in the late 20th-century include Gish Jen’s Typical American (1991), which follows a family who flees China to escape Communist rule in the late 1940s. Lisa Ko’s The Leavers (2017) is a more recent novel that follows Deming Guo, a Chinese American boy, as he reconnects with his mother, an undocumented Chinese factory worker who was deported following an ICE raid.
Key Facts about The Bonesetter’s Daughter

Extra Credit for The Bonesetter’s Daughter

Based on a True Story. Amy Tan frequently draws from her or her family’s personal experiences for inspiration in her writings, and The Bonesetter’s Daughter is no exception. In The Bonesetter’s Daughter, Ruth, the protagonist, inexplicably loses her voice each year in August. When Amy Tan was in college, her roommate was murdered, and Tan had to identify the body. The experience was so traumatic that it rendered Tan temporarily mute, a condition she claims would recur on the anniversary of the incident in the years that followed.

Based on a Novel. Tan wrote the libretto for the opera adaption of The Bonesetter’s Daughter. The opera was composed by Stewart Wallace and premiered by the San Francisco Opera in 2008. 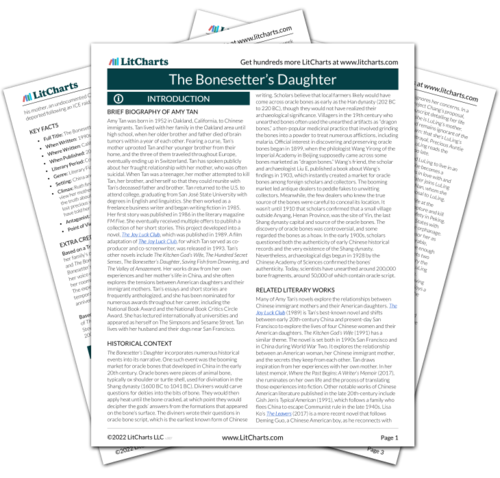 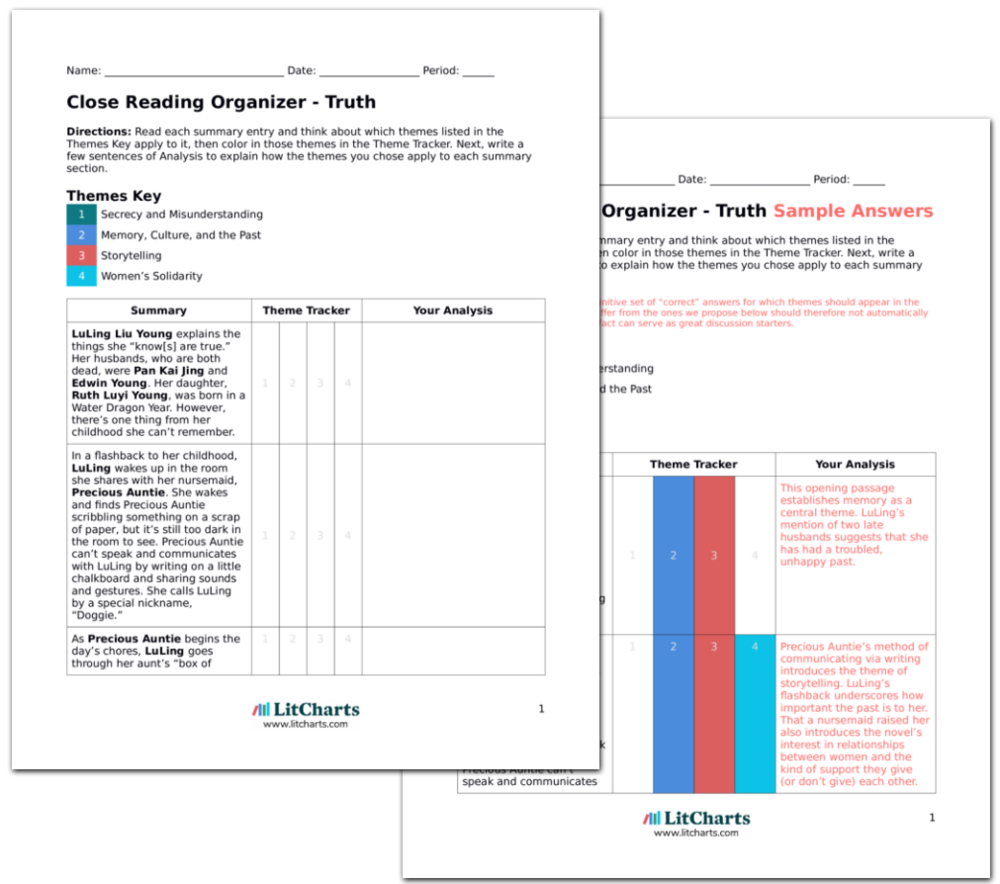