Welcome to the LitCharts study guide on Kazuo Ishiguro's The Buried Giant. Created by the original team behind SparkNotes, LitCharts are the world's best literature guides.

A concise biography of Kazuo Ishiguro plus historical and literary context for The Buried Giant.

A quick-reference summary: The Buried Giant on a single page.

In-depth summary and analysis of every chapter of The Buried Giant. Visual theme-tracking, too.

Explanations, analysis, and visualizations of The Buried Giant's themes.

Description, analysis, and timelines for The Buried Giant's characters.

Description, analysis, and timelines for The Buried Giant's terms.

Explanations of The Buried Giant's symbols, and tracking of where they appear.

An interactive data visualization of The Buried Giant's plot and themes.

Kazuo Ishiguro was born on November 8, 1954 in Nagasaki, Japan. In 1960, when Ishiguro was five years old, his family moved to England after his father (an oceanographer) was offered a job at the National Oceanography Centre. Although his parents spoke Japanese at home to keep their culture and heritage alive, Ishiguro didn’t return to Japan until he was in his 30s, after earning his Bachelor of Arts in English and Philosophy, his Master of Arts in Creative Writing, and publishing his first book, A Pale View of Hills. In 1983, Ishiguro officially became a citizen of the U.K. Since the publication of his first book in 1982, Ishiguro has written six novels, a collection of short stories, four screenplays, and five songs. Ishiguro received the Booker Prize for his novel The Remains of the Day in 1989, the Order of the British Empire for his literary achievements in 1995, a Nobel Prize in Literature in 2017, and in 2019 received a knighthood for services in literature. Today, Ishiguro lives with his wife, Lorna, and their daughter, Naomi, in London, England.
Get the entire The Buried Giant LitChart as a printable PDF.
"My students can't get enough of your charts and their results have gone through the roof." -Graham S.
Download 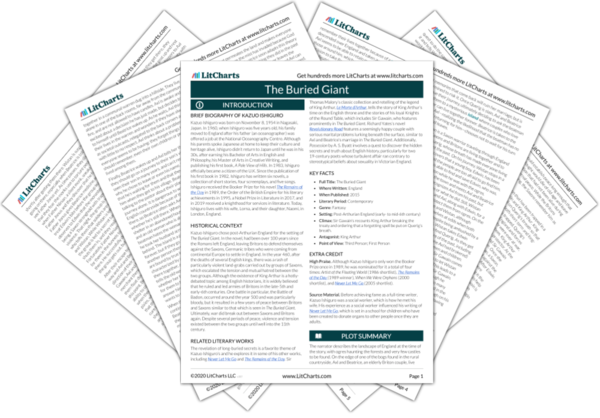 Historical Context of The Buried Giant

Kazuo Ishiguro chose post-Arthurian England for the setting of The Buried Giant. In the novel, had been over 100 years since the Romans left England, leaving Britons to defend themselves against the Saxons, Germanic tribes who were coming from continental Europe to settle in England. In the year 460, after the deaths of several English kings, there was a rash of particularly violent land-grabs carried out by groups of Saxons, which escalated the tension and mutual hatred between the two groups. Although the existence of King Arthur is a hotly-debated topic among English historians, it is widely believed that he ruled and led armies of Britons in the late-5th and early-6th centuries. One battle in particular, the Battle of Badon, occurred around the year 500 and was particularly bloody, but it resulted in a few years of peace between Britons and Saxons similar to that which is seen in The Buried Giant. Ultimately, war did break out between Saxons and Britons again. Despite several periods of peace, violence and tension existed between the two groups until well into the 11th century.

Other Books Related to The Buried Giant

The revelation of long-buried secrets is a favorite theme of Kazuo Ishiguro’s and he explores it in some of his other works, including Never Let Me Go and The Remains of the Day. Sir Thomas Malory’s classic collection and retelling of the legend of King Arthur, Le Morte d’Arthur, tells the story of King Arthur’s time on the English throne and the stories of his loyal Knights of the Round Table, which includes Sir Gawain, who features prominently in The Buried Giant. Richard Yates’s novel Revolutionary Road features a seemingly happy couple with serious marital problems lurking beneath the surface, similar to Axl and Beatrice’s marriage in The Buried Giant. Additionally, Possession by A. S. Byatt involves a quest to discover the hidden secrets and truth about English history, particularly for two 19-century poets whose turbulent affair ran contrary to stereotypical beliefs about sexuality in Victorian England.
Key Facts about The Buried Giant

Extra Credit for The Buried Giant

High Praise. Although Kazuo Ishiguro only won the Booker Prize once in 1989, he was nominated for it a total of four times: Artist of the Floating World (1986 shortlist), The Remains of the Day (1989 winner), When We Were Orphans (2000 shortlist), and Never Let Me Go (2005 shortlist).

Source Material. Before achieving fame as a full-time writer, Kazuo Ishiguro was a social worker, which is how he met his wife. His experience as a social worker influenced his writing of Never Let Me Go, which is set in a school for children who have been created to donate organs to other people once they are adults. 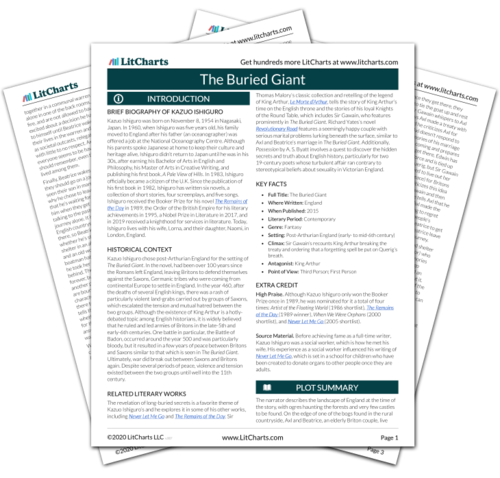 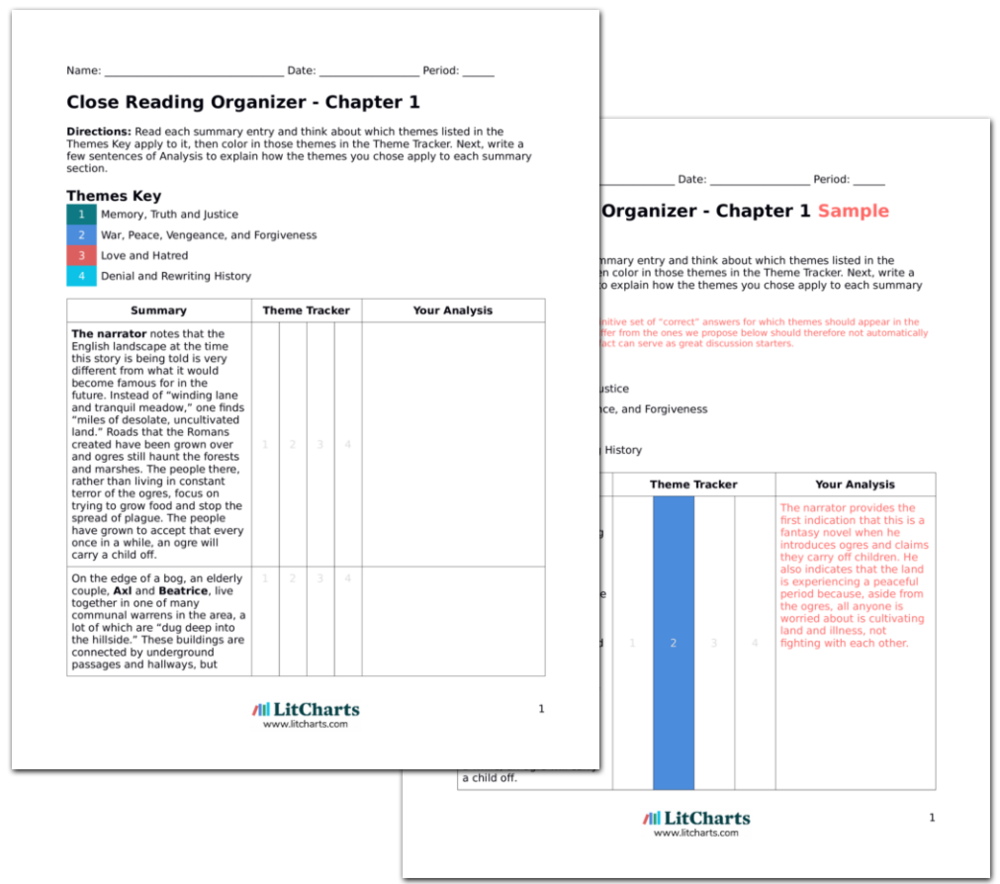