Download this LitChart! (PDF)
Teachers and parents! Struggling with distance learning? Our Teacher Edition on The Cherry Orchard can help.

Welcome to the LitCharts study guide on Anton Chekhov's The Cherry Orchard. Created by the original team behind SparkNotes, LitCharts are the world's best literature guides.

A concise biography of Anton Chekhov plus historical and literary context for The Cherry Orchard.

A quick-reference summary: The Cherry Orchard on a single page.

In-depth summary and analysis of every act of The Cherry Orchard. Visual theme-tracking, too.

Explanations, analysis, and visualizations of The Cherry Orchard's themes.

Description, analysis, and timelines for The Cherry Orchard's characters.

Explanations of The Cherry Orchard's symbols, and tracking of where they appear.

An interactive data visualization of The Cherry Orchard's plot and themes.

Born in 1860 in a port town in the south of Russia, Anton Chekhov grew up in a household ruled by an abusive father who plunged the family into bankruptcy—an imposing figure whose cruelty would inspire many of Chekhov’s dramatic works and short fictions. Chekhov moved to Moscow in 1879 to attend medical school, knowing he had to support his large and struggling family—in order to make ends meet while he studied, he wrote and published satirical short stories and sketches. Chekhov would go on to make more money as a writer than a doctor, though he considered himself a physician first for much of his life. Chekhov suffered from poor health in the mid-1880s, but told very few people of his struggles with tuberculosis; while travelling to the Ukraine for his health in the late 1880s, he was commissioned to write a play, and his literary career took off in earnest. Chekhov enjoyed great success for many years. As his health continued to deteriorate throughout the late 1890s, Chekhov purchased a country estate in Yalta, where he composed some of his most famous works, including Three Sisters, The Cherry Orchard, and the short story “The Lady with the Dog.” Chekhov died due to complications from tuberculosis in July of 1904, just six months after the Moscow Art Theater premiere of The Cherry Orchard; the play was his final work.
Get the entire The Cherry Orchard LitChart as a printable PDF.
"My students can't get enough of your charts and their results have gone through the roof." -Graham S.
Download 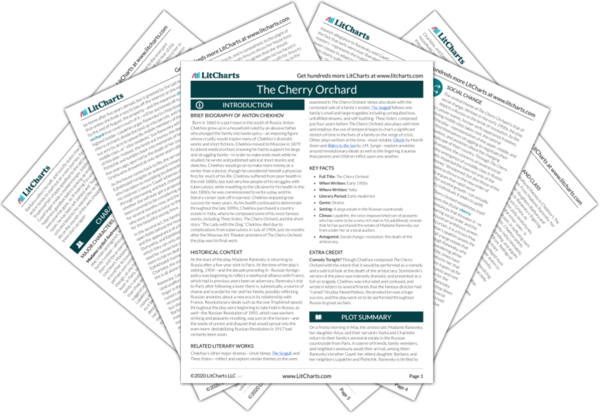 Historical Context of The Cherry Orchard

At the start of the play, Madame Ranevsky is returning to Russia after a five-year stint in Paris. At the time of the play’s setting, 1904—and the decade preceding it—Russian foreign policy was beginning to reflect a newfound alliance with France, which had in previous years been an adversary. Ranevsky’s trip to Paris after following a lover there is, subtextually, a source of shame and scandal for her and her family, possibly reflecting Russian anxieties about a new era in its relationship with France. Revolutionary ideals such as the one Trophimof spouts throughout the play were beginning to take hold in Russia, as well—the Russian Revolution of 1905, which saw workers striking and peasants revolting, was just on the horizon—and the seeds of unrest and disquiet that would sprout into the even more  destabilizing Russian Revolution in 1917 had certainly been sown.

Other Books Related to The Cherry Orchard

Chekhov’s other major dramas—Uncle Vanya, The Seagull, and Three Sisters—reflect and explore similar themes to the ones examined in The Cherry Orchard. Vanya also deals with the contested sale of a family’s estate; The Seagull follows one family’s small and large tragedies including unrequited love, unfulfilled dreams, and self-loathing; Three Sisters, composed just four years before The Cherry Orchard, also plays with time and employs the use of temporal leaps to chart a significant stretch of time in the lives of a family on the verge of crisis. Other plays written at the time—most notably Ghosts by Henrik Ibsen and Riders to the Sea by J.M. Synge—explore anxieties around revolutionary ideals as well as the lingering traumas that parents and children inflict upon one another.
Key Facts about The Cherry Orchard

Extra Credit for The Cherry Orchard

Comedy Tonight? Though Chekhov composed The Cherry Orchard with the intent that it would be performed as a comedy and a satirical look at the death of the aristocracy, Stanislavski’s version of the piece was intensely dramatic and presented as a full-on tragedy. Chekhov was infuriated and confused, and wrote in letters to several friends that the famous director had “ruined” his play. Nevertheless, the production was a huge success, and the play went on to be performed throughout Russia to great acclaim. 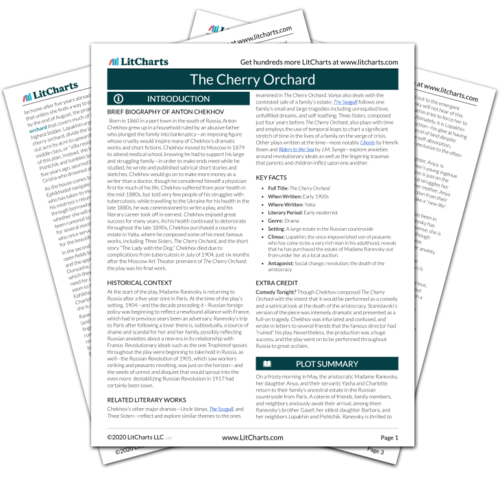 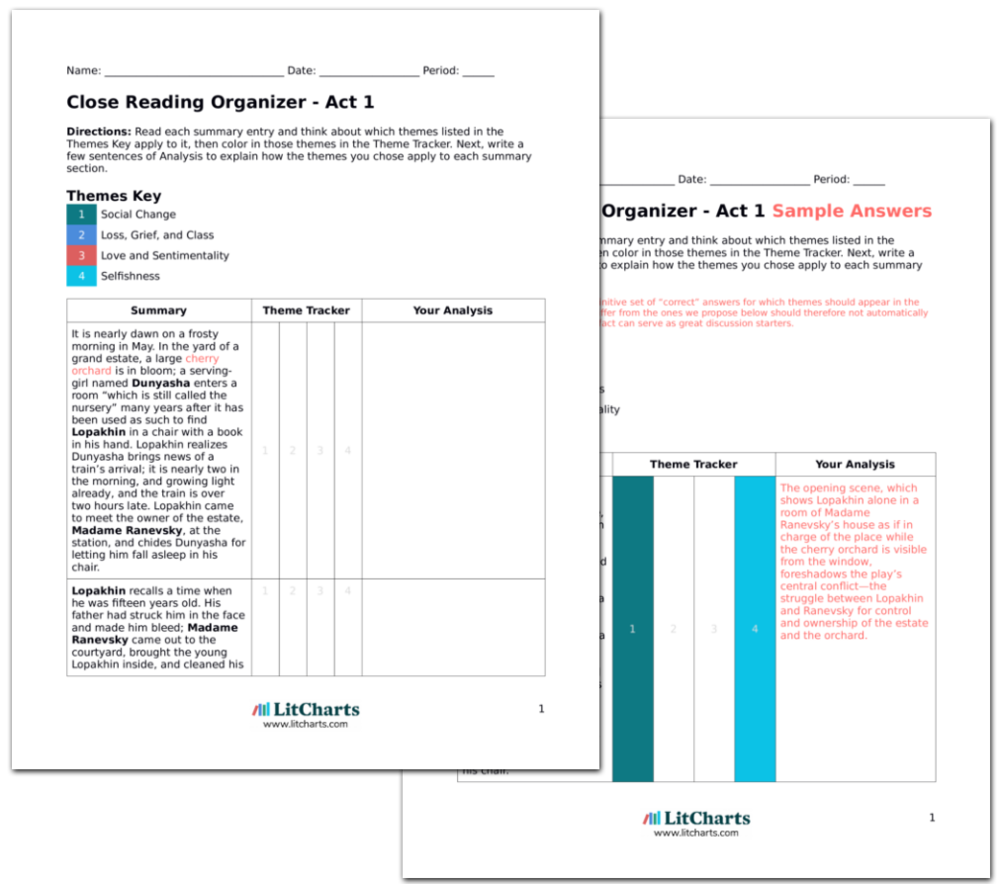