Download this LitChart! (PDF)
Teachers and parents! Struggling with distance learning? Our Teacher Edition on The City We Became can help.

Welcome to the LitCharts study guide on N. K. Jemisin's The City We Became. Created by the original team behind SparkNotes, LitCharts are the world's best literature guides.

The City We Became: Introduction

A concise biography of N. K. Jemisin plus historical and literary context for The City We Became.

The City We Became: Plot Summary

A quick-reference summary: The City We Became on a single page.

In-depth summary and analysis of every chapter of The City We Became. Visual theme-tracking, too.

The City We Became: Themes

Explanations, analysis, and visualizations of The City We Became's themes.

The City We Became: Quotes

The City We Became's important quotes, sortable by theme, character, or chapter.

The City We Became: Characters

Description, analysis, and timelines for The City We Became's characters.

The City We Became: Symbols

Explanations of The City We Became's symbols, and tracking of where they appear.

The City We Became: Theme Wheel

An interactive data visualization of The City We Became's plot and themes.

N.K. Jemisin was born in 1972 in Iowa City, Iowa. Though raised in Mobile, Alabama, she frequently visited New York City as she was growing up. She graduated from Tulane University with a B.S. in psychology and from the University of Maryland with a Master’s in Education. She has published nine solo novels: the Inheritance Trilogy, comprised of The Hundred Thousand Kingdoms (2010), The Broken Kingdoms (2010), and The Kingdom of Gods (2011); the Dreamblood Duology, comprised of The Killing Moon (2012) and The Shadowed Sun (2012); the Broken Earth Trilogy, comprised of The Fifth Season (2015), The Obelisk Gate (2016), and The Stone Sky (2017); and The City We Became (2020), whose sequel The World We Make will be published in 2022. In addition, she has co-authored a Mass Effect video game franchise tie-in novel with video-game writer Mac Walters, Mass Effect: Andromeda Initiation (2017), and published a book of short stories, How Long ‘til Black Future Month? (2018). A popularly and critically acclaimed science-fiction writer, N. K. Jemisin has won Locus, Nebula, and Hugo Awards for her work. Most notably, every installment of her Broken Earth Trilogy won a Hugo Award for Best Novel. Currently she lives in New York City.
Get the entire The City We Became LitChart as a printable PDF.
"My students can't get enough of your charts and their results have gone through the roof." -Graham S.
Download 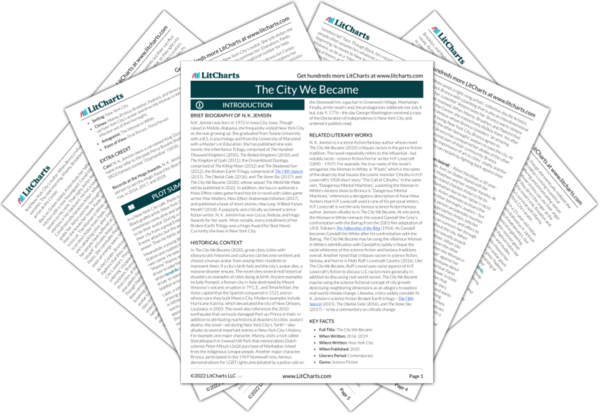 Historical Context of The City We Became

In The City We Became (2020), great cities (cities with idiosyncratic histories and cultures) can become sentient and choose a human avatar from among their residents to represent them. If a city’s birth fails and the city’s avatar dies, a massive disaster ensues. The novel cites several real historical disasters as examples of cities dying at birth. Ancient examples include Pompeii, a Roman city in Italy destroyed by Mount Vesuvius’s volcanic eruption in 79 C.E., and Tenochtitlan, the Aztec capital that the Spanish conquered in 1521 and on whose ruins they built Mexico City. Modern examples include Hurricane Katrina, which devastated the city of New Orleans, Louisiana, in 2005. The novel also references the 2010 earthquake that seriously damaged Port-au-Prince in Haiti. In addition to attributing real historical disasters to cities’ avatars’ deaths, the novel—set during New York City’s “birth”—also alludes to several important events in New York City’s history. For example, one major character, Manny, visits a rock called Shorakkopoch in Inwood Hill Park that memorializes Dutch colonist Peter Minuit’s1626 purchase of Manhattan Island from the indigenous Lenape people. Another major character, Bronca, participated in the 1969 Stonewall riots, famous demonstrations for LGBT rights precipitated by a police raid on the Stonewall Inn, a gay bar in Greenwich Village, Manhattan. Finally, at the novel’s end, the protagonists celebrate not July 4 but July 9, 1776—the day George Washington received a copy of the Declaration of Independence in New York City and ordered it publicly read.

Other Books Related to The City We Became

N. K. Jemisin is a science-fiction/fantasy author whose novel The City We Became (2020) critiques racism in the genre-fiction tradition. The novel repeatedly refers to the influential—but notably racist—science-fiction/horror writer H.P. Lovecraft (1890 – 1937). For example, the true name of the novel’s antagonist, the Woman in White, is “R’lyeh,” which is the name of the dead city that houses the cosmic monster Cthulhu in H.P. Lovecraft’s 1928 short story “The Call of Cthulhu.” In the same vein, “Dangerous Mental Machines,” a painting the Woman in White’s minions show to Bronca is “Dangerous Mental Machines,” references a derogatory description of Asian New Yorkers that H.P. Lovecraft used in one of his personal letters. H.P. Lovecraft is not the only famous science-fiction/fantasy author Jemison alludes to in The City We Became. At one point, the Woman in White reenacts the wizard Gandalf the Grey’s confrontation with the Balrog from the 2001 film adaptation of J.R.R. Tolkien’s The Fellowship of the Ring (1954). As Gandalf becomes Gandalf the White after his confrontation with the Balrog, The City We Became may be using the villainous Woman in White’s identification with Gandalf to subtly critique the racial whiteness of the science-fiction and fantasy traditions overall. Another novel that critiques racism in science fiction, fantasy, and horror is Matt Ruff’s Lovecraft Country (2016). Like The City We Became, Ruff’s novel uses racist aspects of H.P. Lovecraft’s fiction to discuss U.S. racism more generally. In addition to discussing real-world racism, The City We Became may be using the science-fictional concept of city growth destroying neighboring dimensions as an allegory to explore real-world climate change. Likewise, critics widely consider N. K. Jemisin’s science-fiction Broken Earth trilogy—The Fifth Season (2015), The Obelisk Gate (2016), and The Stone Sky (2017)— to be a commentary on climate change.
Key Facts about The City We Became

Extra Credit for The City We Became 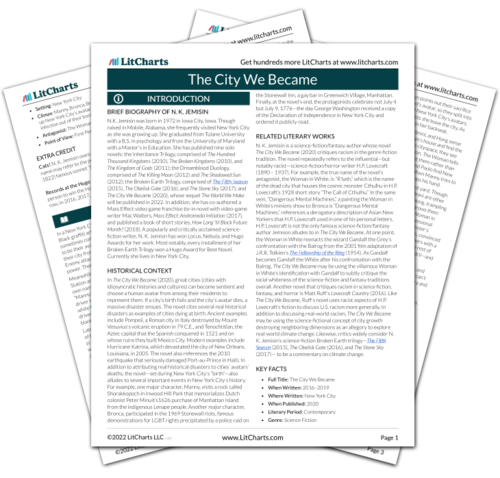 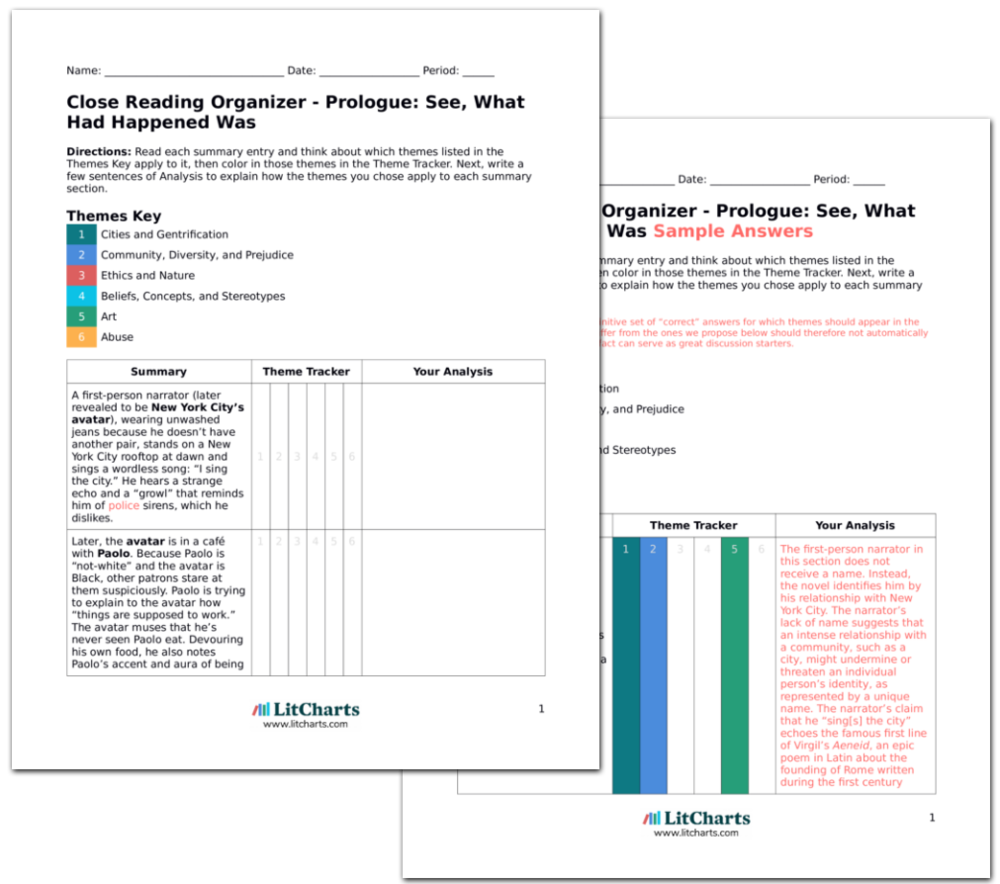