Download this LitChart! (PDF)
Teachers and parents! Struggling with distance learning? Our Teacher Edition on The Ladies’ Paradise can help.

Welcome to the LitCharts study guide on Émile Zola's The Ladies’ Paradise. Created by the original team behind SparkNotes, LitCharts are the world's best literature guides.

A concise biography of Émile Zola plus historical and literary context for The Ladies’ Paradise.

A quick-reference summary: The Ladies’ Paradise on a single page.

In-depth summary and analysis of every chapter of The Ladies’ Paradise. Visual theme-tracking, too.

Explanations, analysis, and visualizations of The Ladies’ Paradise's themes.

Description, analysis, and timelines for The Ladies’ Paradise's characters.

Explanations of The Ladies’ Paradise's symbols, and tracking of where they appear.

An interactive data visualization of The Ladies’ Paradise's plot and themes.

Although born in Paris, Émile Zola spent his childhood in Aix-en-Provence. When Zola was seven, his father died, and Zola and his mother moved back to Paris. Zola’s mother raised him to pursue law, but Zola flunked his exam twice and worked instead as a clerk at a shipping firm. In 1865, Zola started an affair with a seamstress named Alexandrine, whom he later married in 1870. Although they had no children, they cared for Zola’s mother, who lived with them. In 1888, Zola started another affair with another seamstress named Jeanne with whom Zola had two children. Zola visited his two children in secret until Alexandrine discovered their existence and—after nearly divorcing Zola—decided to allow him to support them. Zola’s first novel—an autobiography that alerted the police to the corruption in the shipping industry—got him fired from his company. After that, he published many serial novels and criticisms in local newspapers. After his novel Therese Raquin acquired him some publicity, he started on his major life’s work: the twenty-volume novel series Les Rougon-Macquart, of which The Ladies’ Paradise is the 11th volume. After the seventh volume of the series was published in 1877, Zola secured a publishing contract and became wealthy, earning more than many other prominent writers of his time. As well as being a major literary influence, Zola was also active politically. In 1898, he published an open letter called J’Accuse…! (I accuse…!), in which he accused prominent members of the French army of wrongfully convicting Alfred Dreyfus—a French soldier—on antisemitic grounds. Although Zola’s outspokenness led to a year’s exile in the United Kingdom, Dreyfus was ultimately acquitted, an event which proved the power of writers to shape public opinion. In 1902, Zola died of carbon monoxide poisoning from a blocked chimney. Some of the thousands of people who attended his funeral believed that Zola had been murdered by his enemies in the Dreyfus trial (who had made previous attempts to kill him), but no evidence was ever found.
Get the entire The Ladies’ Paradise LitChart as a printable PDF.
"My students can't get enough of your charts and their results have gone through the roof." -Graham S.
Download 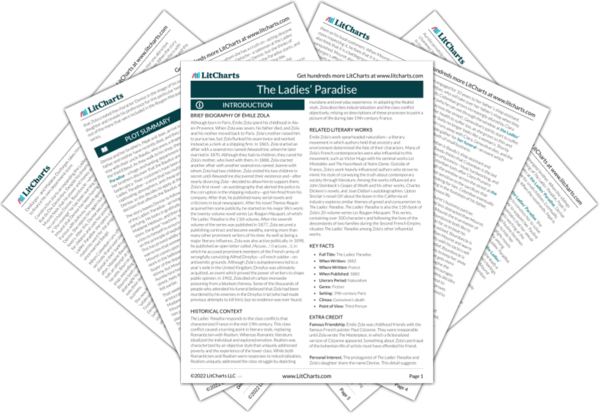 Historical Context of The Ladies’ Paradise

The Ladies’ Paradise responds to the class conflicts that characterized France in the mid-19th century. This class conflict caused a turning point in literary style, replacing Romanticism with Realism. Whereas Romantic literature idealized the individual and explored emotion, Realism was characterized by an objective style that uniquely addressed poverty and the experience of the lower class. While both Romanticism and Realism were responses to industrialization, Realism uniquely addressed the class struggle by depicting mundane and everyday experience. In adopting the Realist style, Zola describes industrialization and the class conflict objectively, relying on descriptions of these processes to paint a picture of life during late 19th-century France.

Other Books Related to The Ladies’ Paradise

Émile Zola’s work spearheaded naturalism—a literary movement in which authors held that ancestry and environment determined the fate of their characters. Many of Zola’s French contemporaries were also influential to this movement, such as Victor Hugo with his seminal works Les Misérables and The Hunchback of Notre-Dame. Outside of France, Zola’s work heavily influenced authors who strove to mimic his style of conveying the truth about contemporary society through literature. Among the works influenced are John Steinbeck’s Grapes of Wrath and his other works, Charles Dickens’s novels, and Joan Didion’s autobiographies. Upton Sinclair’s novel Oil! about the boom in the California oil industry explores similar themes of greed and consumerism to The Ladies’ Paradise. The Ladies’ Paradise is also the 11th book of Zola’s 20-volume series Les Rougon-Macquart. This series, containing over 300 characters and following the lives of the descendants of two families during the Second French Empire, situates The Ladies’ Paradise among Zola’s other influential works.
Key Facts about The Ladies’ Paradise

Extra Credit for The Ladies’ Paradise

Famous Friendship. Émile Zola was childhood friends with the famous French painter Paul Cézanne. They were inseparable until Zola wrote The Masterpiece, in which a fictionalized version of Cézanne appeared. Something about Zola’s portrayal of the bohemian life of artists must have offended his friend.

Personal Interest. The protagonist of The Ladies’ Paradise and Zola’s daughter share the name Denise. This detail suggests that Zola created the character Denise in the image of his own daughter and reveals his preference for this particular heroine out of the many that were included in the Rougon-Macquart series. 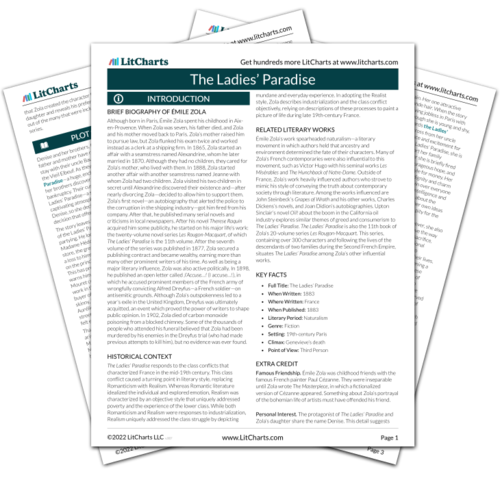 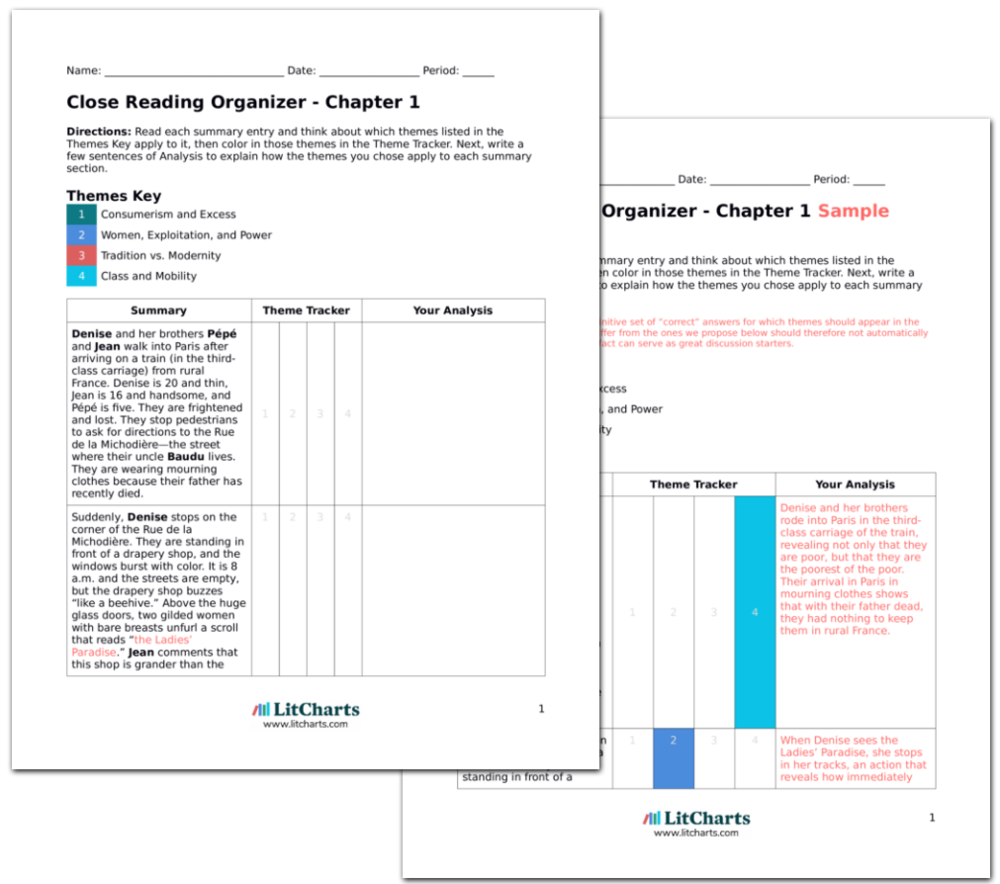