Get LitCharts A+
LitCharts assigns a color and icon to each theme in The Left Hand of Darkness, which you can use to track the themes throughout the work.

On Gethen, there are two dominant religions. The first is Yomeshta, which follows the teaching of Meshe and resembles a Judeo-Christian religion. The second is Handdara, a spiritual practice closer to Taoism. Yomeshta is centered around the idea of light, and unity. In contrast, Handdara is interested in the interaction of light and dark, and in the way opposites can come together and complement each other.  Although both religions are described in depth, the novel more closely aligns itself with the Handdara philosophy. Gethen is a world of both light and dark. Its people are both men and women. As a result, the Handdara interest in opposites that clarify or balance each other better describes the planet and its inhabitants than does the pure, uncomplicated light of Yomeshta.

Because of its multi-millennia Ice Age, Gethen is a precarious place to live. A few degrees of difference in global temperatures could completely freeze over the planet’s narrow inhabitable zone, and a few rash decisions by Gethenian governments could easily send their nations into deadly tailspins. As a result, Gethenian people are slow moving and careful. They tend the land with great attention, they travel at moderate speeds, and they advance technologically at a snail’s pace. Ai, as he travels on a twenty-five mile-per-hour truck observes “the people of Winter…feel that progress is less important than presence.” He also observes that while “Winter hasn’t achieved in thirty centuries what Terra once achieved in thirty decades” it has endured much longer than Terran society possibly could. This is all a reflection of the importance of balance and proportion valued by the Handdarata.

Handdara is a religion of dualism — the self and the other, the known and the unknown, the light and the dark. This explicitly reflects Gethenian sexuality — every person has a dual identity, and is both a man and a woman. In contrast, the Yomeshta say “man’s singularity is his divinity,” however the narrative makes it clear that Gethenian’s divinity comes from their duality. Even the title of the book is a celebration of duality; it comes from a Handdarata proverb, which goes, “Light is the left hand of darkness / and darkness the right hand of light. / Two are one, life and death, lying / together like lovers in kemmer, / like hands joined together, / like the end and the way.” Yomeshta attempts to celebrate only life, but Handdara understands that for life to be properly celebrated, it must be set up in contrast to its opposite, death. Ai compares Handdara, and Gethenians themselves, to the Terran concept of yin and yang. He says, “Light, dark. Fear, courage. Cold, warmth. Female, male,” each pair of opposites exists within each resident of Gethen.

The Yomeshta and the Handdarata have different perspectives on the usefulness of knowledge. Practitioners of Yomeshta are interested in the concept of clear and total sight, the kind practiced by their enlightened prophet. The Yomeshta look for complete clarity, and are uncomfortable with nuance and complexity. In contrast, practitioners of Handdara are comfortable with complex truths, and are also comfortable with not knowing everything. In Handdara, “ignorance is the ground of thought. Unproof is the ground of action.” According to its believers, there is only one certainty in life, death, and therefore “the only thing that makes life possible is permanent, intolerable uncertainty; not knowing what comes next.” The most devoted Handdarata believe knowledge is, in the end, essentially futile, and spend their lives trying to become perfectly ignorant. Ai, whose mission requires him to gather knowledge of Gethen, will never be a perfect Handdarata disciple. However his experience with a group of Handdarata Foretellers helps teach him how to ask the right questions, and how to become content with ambiguous answers.

Handdara isn’t organized like a traditional religion, and does not have clergymen. The most authoritative religious figures are its Foretellers, men who get together and are able to answer questions about the future. Ai understands these Foretellers as being able to domesticate a hunch, a skill that Estraven has as well, to a lesser extent. Estraven is able to sense when his luck is good and when it is bad, and can feel the wheel of good fortune turning beneath his hand. This phenomenon can be described through Handdara, but there is no framework to describe this kind of skill in Yomeshta.

Handdara is a more useful framework with which to view Le Guin’s world. While Yomeshta attempts to shed a light on everything, past present and future, and leaves little room for nuance, Handdara is built upon the idea of balance, of light and darkness working together. Within a Handdarata framework, ambiguity is natural, and a person’s knowledge will always remain incomplete. Yomeshta, by framing light as good, necessarily designates darkness as bad. In Handdara, in contrast, there is no good and evil. Instead, the world is a complex place, where opposites can happily coexist, and neither elevated above the other. 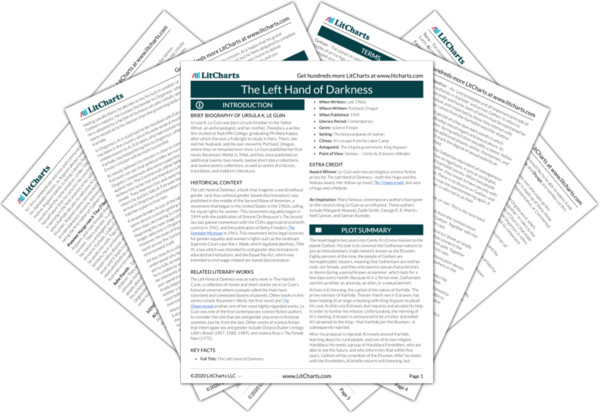 Light and Dark, Religion and Spirituality Quotes in The Left Hand of Darkness

Below you will find the important quotes in The Left Hand of Darkness related to the theme of Light and Dark, Religion and Spirituality .
Chapter 5 Quotes

“But we in the Handdara don’t want answers. It’s hard to avoid them, but we try to.”
“Faxe, I don’t think I understand.”
“Well, we come here to the Fastness mostly to learn what questions not to ask.”
“But you’re the Answerers!”
“You don’t see yet, Genry, why we perfected and practice Foretelling?”
“No—”

“To exhibit the perfect uselessness of knowing the answer to the wrong question.”

Darkness is only in the mortal eye, that thinks it sees, but sees not. In the Sight of Meshe there is no darkness.
Therefore those that call upon the darkness are made fools of and spat out from the mouth of Meshe, for they name what is not, calling it Source and End.
There is neither source nor end, for all things are in the Center of Time. As all the stars may be reflected in a round raindrop falling in the night: so too do all the stars reflect the raindrop. There is neither darkness nor death, for all things are, in the light of the Moment, and their end and their beginning are one.
One center, one seeing, one law, one light! Look now into the Eye of Meshe!

The luck that had turned in Ethwen now turned the world with it under my hand. I never had a gift but one, to know when the great wheel gives to a touch, to know and act. I had thought that foresight lost, last year in Erhenrang, and never to be regained. A great delight it was to feel that certainty again, to know that I could steer my fortune and the world’s chance like a bobsled down the steep, dangerous hour.

…Hate Orgoreyn? No, how should I? How does one hate a country, or love one? Tibe talks about it; I lack the trick of it. I know people, I know towns, farms, hills and river and rocks, I know how the sun at sunset in autumn falls on the side of a certain plowland in the hills; but what is the sense of giving a boundary to all that, of giving it a name and ceasing to love where the name ceases to apply? What is love of one’s country; is it hate of one’s uncountry? Then it’s not a good thing. Is it simply self-love? That’s a good thing, but one mustn’t make a virtue of it, or a profession…Insofar as I love life, I love the hills of the Domain of Estre, but that sort of love does not have a boundary-line of hate. And beyond that, I am ignorant, I hope.

Light is the left hand of darkness

and darkness the right hand of light.
Two are one, life and death, lying

“Fear’s very useful. Like darkness; like shadows.” Estraven’s smile was an ugly split in a peeling, cracked brown mask, thatched with black fur and set with two flecks of black rock. “It’s queer that daylight’s not enough. We need the shadows, in order to walk.”
“Give me your notebook a moment.”
He had just noted down our day’s journey and done some calculation of mileage and rations. He pushed the little tablet and carbon-pencil around the Chabe stove to me. On the blank leaf glued to the inner back cover I drew the double curve within the circle, and blacked the yin half of the symbol, then pushed it back to my companion. “Do you know that sign?”
He looked at it a long time with a strange look, but he said, “No.”
“It’s found on Earth, and on Hain-Davenant, and on Chiffewar. It is yin and yang. Light is the left hand of darkness…how did it go? Light, dark. Fear, courage. Cold, warmth. Female, male. It is yourself, Therem. Both and one. A shadow on snow.”

We stayed two more days in Kurkurast, getting well fed and rested, waiting for a road-packer that was due in from the south and would give us a lift when it went back again. Our hosts got Estraven to tell them the whole tale of our crossing of the Ice. He told it as only a person of an oral-literature tradition can tell a story, so that it became a saga, full of traditional locutions and even episodes, yet exact and vivid, from the sulphurous fire and dark of the pass between Drumner and Dremegole to the screaming gusts from the mountain-gaps that swept the Bay of Guthen; with comic interludes, such as his fall into the crevasse, and mystical ones, when he spoke of the sounds and silences of the Ice, of the shadowless weather, of the night’s darkness. I listened as fascinated as all the rest, my gaze on my friend’s dark face.