The Memory Police takes place on an unnamed island where a mysterious, supernatural force makes things “disappear.” “Disappearances” start in the mind—people on the island first lose all association with the object that’s been disappeared, and then they physically get rid of the item (if they can) by throwing it in the river or burning it. Nature, too, seems to comply with the mysterious rules of these disappearances, like when roses disappear and the wind somehow knows to only blow off the rose petals and not other flowers’ petals.

The story takes place through the eyes of the unnamed narrator, a young woman whose mother was part of a minority of people on the island whose minds are not affected by the disappearances. When the narrator was a young girl, her mother used to show her a cabinet full of secret items, all objects that had been disappeared years ago. The narrator loved hearing her mother talk about these mysterious objects, even though she was unable to remember them or create any associations with any of these items. Eventually, a state force called the Memory Police found out that the mother did not lose her memories, and they summoned her to their headquarters—a week later, she died, and the narrator is sure that the Memory Police killed her.

In the present, the narrator is grown up and lives alone. Her father also died, though of natural causes. The narrator is grateful that her father didn’t live long enough to see birds disappear, because he was an ornithologist, and living without birds would have devastated him. As an adult, the narrator is a writer, and she’s published a few novels. She trusts her editor, R, with her manuscripts. When she finds out that R is also one of the people who doesn’t lose his memories—and is thus in danger of being captured and killed by the Memory Police—she comes up with a plan to hide him. She and an old family friend, the old man, build a secret room underneath the narrator’s father’s old office, and R leaves his wife to move into the room for safety.

Over the course of the novel, more and more things disappear, and though the island inhabitants try to get along, they find themselves less and less capable of handling the disappearances. When calendars disappear, time itself adheres to the mysterious rules of disappearances: the island is stuck in winter, with snow falling most days. When novels disappear, R tries desperately to get the narrator not to get rid of her books. But even though she is a novelist and writing was previously so important to her, she burns most of them.

Punctuating the novel are excerpts from a manuscript that the narrator has been writing. In the manuscript, a young woman falls in love with her typing teacher. She loses her voice and can only communicate by typing on a typewriter. One day, her typewriter breaks, and the teacher says he will fix it. He leads her to a room at the top of a clocktower (the same building where he teaches classes)—there, the woman sees that there are many broken typewriters, all stacked high to the ceiling. Instead of fixing the machine, the teacher tells her that it was he who had taken her voice and that he’d “locked” it inside a typewriter. He then proceeds to lock the woman into the room. She has no voice, and she can’t fight back.

The narrator, the old man, and R try to carry on with life despite the disappearances and despite the looming fear of the Memory Police. R cannot leave the hidden room, so he becomes quite reliant on the narrator, who brings him all of his meals and looks after him. The two get into the habit of talking often—sometimes about simple things, but often about how different it is being someone who remembers versus somebody who forgets. The narrator realizes that she’s fallen in love with R.

The narrator forces herself to finish her manuscript, even though writing has become incredibly exhausting at best and impossible at worst since the disappearance of novels. In the manuscript, the woman is still locked in the room in the tower—the teacher visits her to feed her and to abuse her, but he eventually stops caring that much about her and focuses his attention on a new student. The woman is unable to leave the room, but she is also mentally deteriorating—the manuscript ends with her being “absorbed” into the room and with the teacher choosing a new victim.

In the main narrative, the narrator is also disintegrating. The old man dies because of an injury he sustained during an earthquake, and the narrator feels incredibly alone. Then, not long after, left legs disappear. Slowly but surely, all body parts eventually disappear, and the people of the island are reduced to just their voices. The narrator (as a voice) sits in the hidden room with R, who begs her to remember her body. But she says that she cannot. Then, even her voice disappears. R sits, devastated, alone in the hidden room for a long time. But with this final disappearance, it is as though something has shattered through the rules of the island, and R no longer seems to fear the Memory Police (the narrator thinks that even they have disappeared). So, he eventually walks up and out of the hidden room. The narrator, no longer any sort of real entity, “continues to disappear.” 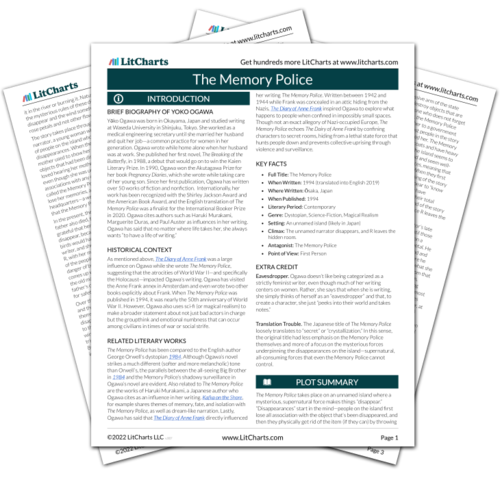 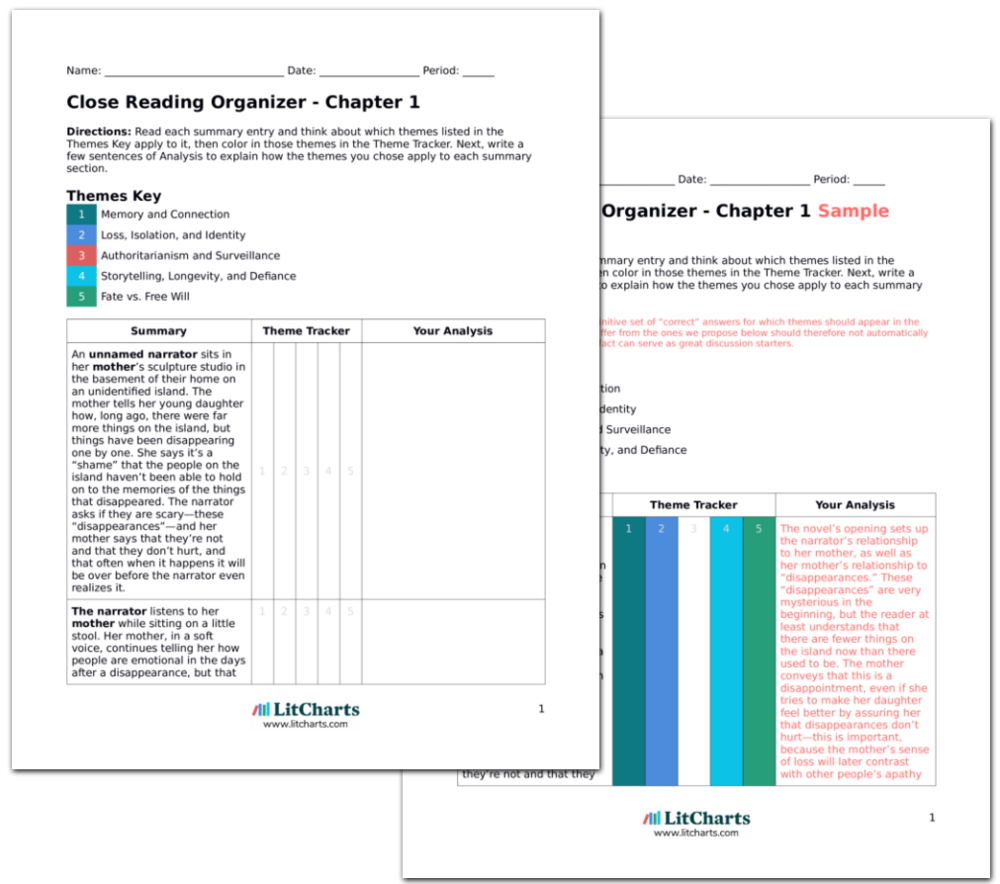