Saki subverts expectations of naiveté, as the young, too-easily-dismissed Vera handily manipulates the adults around her. In “The Open Window,” age does not necessarily confer wisdom, and a childish demeanor can mask audacious cunning.

In the opening line of the story, Mr. Nuttel immediately observes that Vera is a “very self-possessed young lady,” yet nevertheless fails to detect her prank. This is in large part because, in keeping with her self-possession, Vera knows how to play the role of an innocent, nonthreatening girl. Vera tempers her own significance from the moment she meets Mr. Nuttel, saying, “My aunt will be down presently … in the meantime you must try and put up with me.” By presenting herself as inconsequential, she is able to avert suspicion of anything she subsequently says.

Despite how she may present herself, however, Vera is clearly more perceptive than Mr. Nuttel. While the latter is consumed with searching for the proper thing to say and constantly worrying about his own infirmities, Vera is sizing up her guest. Her delicate prying—“Then you know practically nothing about my aunt?”—goes unnoticed by Mr. Nuttel, yet grants Vera the permission she needs to make up any history she desires.

The quickness and specificity of Vera’s ghost story further evidences her keen knack for observation. Her detailed description of her uncles means she must have noted the exact configuration of men heading out hunting earlier in the day. Details such as the “white waterproof coat over” an uncle’s arm, the presence of a spaniel, and her uncle singing “Bertie, why do you bound?” ground her story in reality. Her acting skills are well-practiced as well, as she is able to convince Mr. Nuttel that she is genuinely terrified upon the return of her uncles. That, or he just is not suspecting a young girl to so brazenly lie to his face; it appears Mr. Nuttel would rather believe ghosts have entered the Sappleton house than that a 15-year-old girl could have fooled him.

“The Open Window” does not condemn Vera for her deception. On the contrary, Saki presents her as remarkably quick-thinking and imaginative young woman, simply amusing herself while surrounded by less observant adults in the stiflingly proper English countryside. Vera’s name, in fact, comes from the Latin for truth. While her stories are anything but, Saki suggests that her ability to reveal the artifice of certain social situations is, in itself, an act of honesty.

The ThemeTracker below shows where, and to what degree, the theme of Innocence and Guile appears in each chapter of The Open Window. Click or tap on any chapter to read its Summary & Analysis.
How often theme appears:
chapter length:
Chapter
The Open Window
Get the entire The Open Window LitChart as a printable PDF.
"My students can't get enough of your charts and their results have gone through the roof." -Graham S.
Download 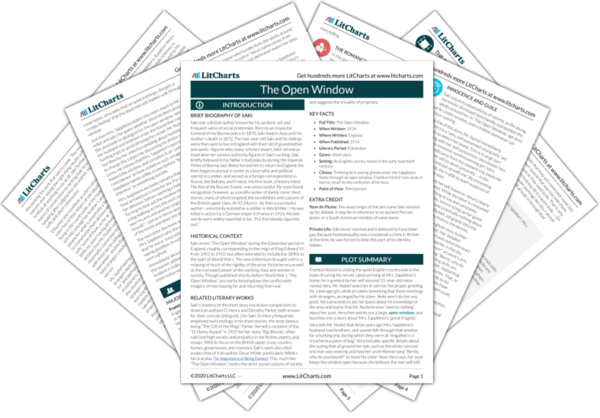 Innocence and Guile Quotes in The Open Window

Poor aunt always thinks that they will come back some day, they and the little brown spaniel that was lost with them, and walk in at that window just as they used to do. That is why the window is kept open every evening till it is quite dusk. … Do you know, sometimes on still, quiet evenings like this, I almost get a creepy feeling that they will all walk in through that window - "

Romance at short notice was her speciality.