Welcome to the LitCharts study guide on Edith Wharton's The Other Two. Created by the original team behind SparkNotes, LitCharts are the world's best literature guides.

The Other Two: Introduction

A concise biography of Edith Wharton plus historical and literary context for The Other Two.

The Other Two: Plot Summary

A quick-reference summary: The Other Two on a single page.

The Other Two: Detailed Summary & Analysis

In-depth summary and analysis of every of The Other Two. Visual theme-tracking, too.

The Other Two: Themes

Explanations, analysis, and visualizations of The Other Two's themes.

The Other Two: Quotes

The Other Two's important quotes, sortable by theme, character, or .

The Other Two: Characters

Description, analysis, and timelines for The Other Two's characters.

The Other Two: Symbols

Explanations of The Other Two's symbols, and tracking of where they appear.

The Other Two: Theme Wheel

An interactive data visualization of The Other Two's plot and themes.

Edith Wharton was born Edith Newbold Jones in 1862. Wharton’s paternal relatives, the Joneses, were a wealthy and socially significant New York family who made their fortune in real estate. Wharton lived a privileged life of private tutors and tours abroad to Europe. In 1879, she made her formal debut into upper-class society, performing as debutante. Wharton’s wealthy upbringing would inform much of her writing. Although her gender prevented her from receiving much encouragement, she began writing a novella, Fast and Loose, in 1877. Verses, a collection of poems, was published privately in 1878. In 1885, Wharton married Edward “Teddy” Wharton in New York. The couple loved to travel and did so extensively—most often to Italy—throughout their marriage. While in the States, they lived primarily at “The Mount,” their estate in Lenox, Massachusetts, which Wharton—a lover of architecture and decoration—designed in 1902. Though she is best known for her novels, Wharton would write over 80 short stories in her lifetime. “The Other Two” was first published in 1904. The novel The House of Mirth, one of her best-known works, was published the following year. In 1921, Wharton was awarded the Pulitzer Prize for Fiction for The Age of Innocence (1920). She died of a stroke while in France in 1937.
Get the entire The Other Two LitChart as a printable PDF.
"My students can't get enough of your charts and their results have gone through the roof." -Graham S.
Download it! 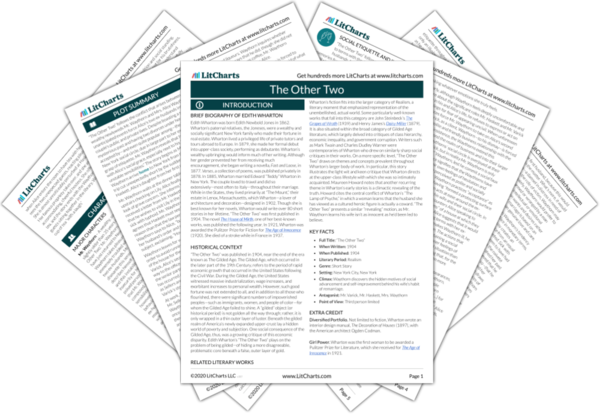 Historical Context of The Other Two

“The Other Two” was published in 1904, near the end of the era known as The Gilded Age. The Gilded Age, which occurred in the later part of the 19th Century, refers to the period of rapid economic growth that occurred in the United States following the Civil War. During the Gilded Age, the United States witnessed massive industrialization, wage increases, and exorbitant increases to personal wealth. However, such good fortune was not extended to all, and in addition to all those who flourished, there were significant numbers of impoverished peoples—such as immigrants, women, and people of color—for whom the Gilded Age failed to shine. A “gilded” object (or historical period) is not golden all the way through; rather, it is only wrapped in a thin outer layer of luster. Beneath the gilded realm of America’s newly expanded upper-crust lay a hidden world of poverty and subjection. One social consequence of the Gilded Age, thus, was a growing critique of this economic disparity. Edith Wharton’s “The Other Two” plays on the problem of being gilded—of hiding a more disagreeable, problematic core beneath a false, outer layer of gold.

Other Books Related to The Other Two

Wharton’s fiction fits into the larger category of Realism, a literary moment that emphasized representation of the unembellished, actual world. Some particularly well-known works that fall into this category are John Steinbeck’s The Grapes of Wrath (1939) and Henry James’s Daisy Miller (1879). It is also situated within the broad category of Gilded Age literature, which largely delved into critiques of class hierarchy, economic inequality, and government corruption. Writers such as Mark Twain and Charles Dudley Warner were contemporaries of Wharton who drew on similarly sharp social critiques in their works. On a more specific level, “The Other Two” draws on themes and concepts prevalent throughout Wharton’s larger body of work. In particular, this story illustrates the light wit and keen critique that Wharton directs at the upper-class lifestyle with which she was so intimately acquainted. Maureen Howard notes that another recurring theme in Wharton’s early stories is a climactic revealing of the truth. Howard cites the central conflict of Wharton’s “The Lamp of Psyche,” in which a woman learns that the husband she has viewed as a cultured heroic figure is actually a coward. “The Other Two” presents a similar “revealing” motion, as Mr. Waythorn learns his wife isn’t as innocent as he’d been led to believe.
Key Facts about The Other Two

Extra Credit for The Other Two

Diversified Portfolio. Not limited to fiction, Wharton wrote an interior design manual, The Decoration of Houses (1897), with the American architect Ogden Codman.

Girl Power. Wharton was the first woman to be awarded a Pulitzer Prize for Literature, which she received for The Age of Innocence in 1921. 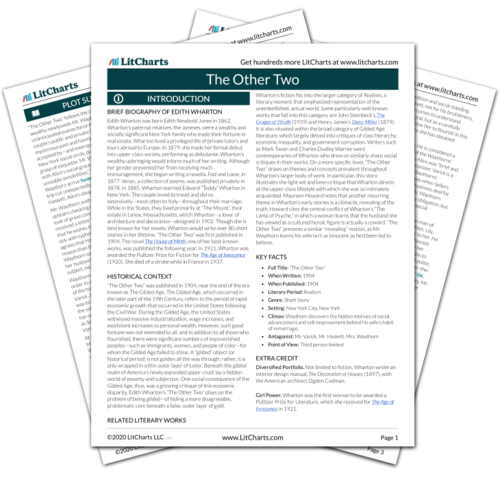 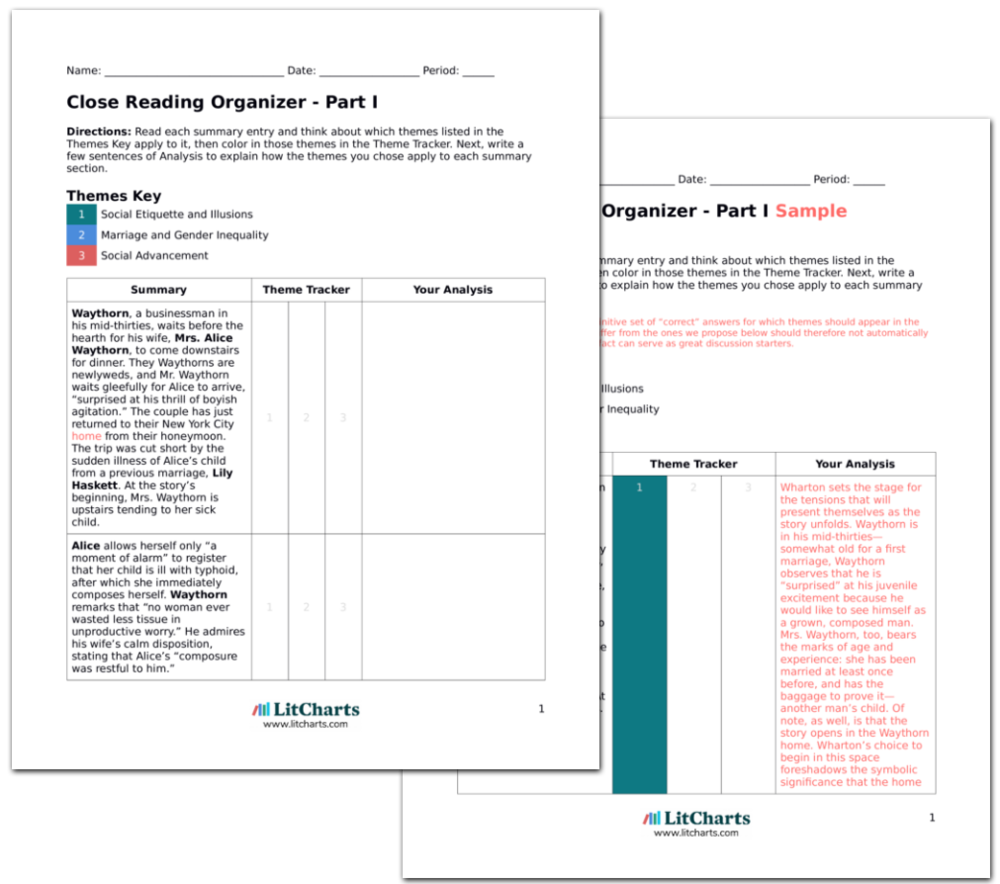