Download this LitChart! (PDF)
Teachers and parents! Struggling with distance learning? Our Teacher Edition on The Overstory can help.

Welcome to the LitCharts study guide on Richard Powers's The Overstory. Created by the original team behind SparkNotes, LitCharts are the world's best literature guides.

A concise biography of Richard Powers plus historical and literary context for The Overstory.

A quick-reference summary: The Overstory on a single page.

In-depth summary and analysis of every chapter of The Overstory. Visual theme-tracking, too.

Explanations, analysis, and visualizations of The Overstory's themes.

The Overstory's important quotes, sortable by theme, character, or chapter.

Description, analysis, and timelines for The Overstory's characters.

Explanations of The Overstory's symbols, and tracking of where they appear.

An interactive data visualization of The Overstory's plot and themes.

When Richard Powers was 11, his family moved from Illinois to Thailand, where they stayed until he was 16. While living abroad, Powers learned to play multiple instruments and developed a great love for reading. Back in the U.S., he attended the University of Illinois, where he majored in English. Powers had initially intended to major in physics, but he found himself repelled by the specialization this required and instead preferred the “aerial view” of life offered by literature. In 1980, Powers moved to Boston to work as a computer programmer and freelance data processor. After being inspired by a photograph at the Boston Museum of Fine Arts, he quit his job and began his first novel, Three Farmers on Their Way to a Dance, which was published in 1985. Powers then moved to the Netherlands and began writing full time, completing the novels Prisoner’s Dilemma and The Gold Bug Variations. Powers continued to write novels during a residence at Cambridge and then back in the U.S., where he still teaches and writes. His works are known for focusing on science, technology, and music, all through the lens of fiction. His 12th novel, The Overstory (2018), won the 2019 Pulitzer Prize for Fiction.
Get the entire The Overstory LitChart as a printable PDF.
"My students can't get enough of your charts and their results have gone through the roof." -Graham S.
Download 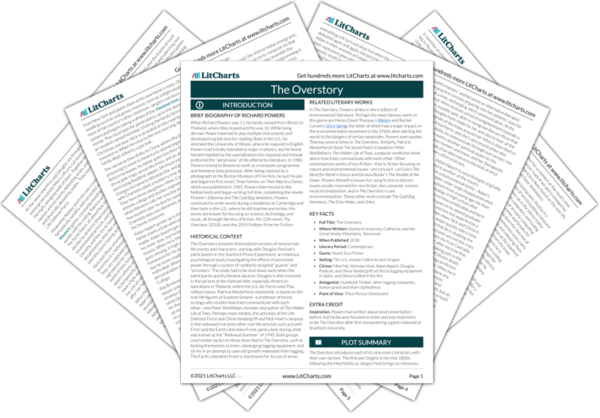 Historical Context of The Overstory

The Overstory presents fictionalized versions of several real-life events and characters, starting with Douglas Pavlicek’s participation in the Stanford Prison Experiment, an infamous psychological study investigating the effects of perceived power through a system of randomly assigned “guards” and “prisoners.” The study had to be shut down early when the participants quickly became abusive. Douglas is then involved in the tail end of the Vietnam War, especially America’s operations in Thailand, where the U.S. Air Force used Thai military bases. Patricia Westerford, meanwhile, is based on the real-life figures of Suzanne Simard—a professor of forest ecology who studies how trees communicate with each other—and Peter Wohlleben, forester and author of The Hidden Life of Trees. Perhaps most notably, the activities of the Life Defense Force and Olivia Vandergriff and Nick Hoel’s campout in the redwood tree echo other real-life activists such as Earth First! and the Earth Liberation Front, particularly during what was known as the “Redwood Summer” of 1990. Both groups used similar tactics to those described in The Overstory, such as locking themselves to trees, sabotaging logging equipment, and sit-ins in an attempt to save old-growth redwoods from logging. The Earth Liberation Front is also known for its use of arson.

Other Books Related to The Overstory

In The Overstory, Powers writes in the tradition of environmental literature. Perhaps the most famous works in this genre are Henry David Thoreau’s Walden and Rachel Carson’s Silent Spring, the latter of which had a major impact on the environmentalist movement in the 1960s after alerting the world to the dangers of certain pesticides. Powers even quotes Thoreau several times in The Overstory. Similarly, Patricia Westerford’s book The Secret Forest is based on Peter Wohlleben’s The Hidden Life of Trees, a popular nonfiction book about how trees communicate with each other. Other contemporary works of eco-fiction—that is, fiction focusing on nature and environmental issues—are Ursula K. Le Guin’s The Word for World is Forest and Octavia Butler’s The Parable of the Sower. Powers himself is known for using fiction to discuss issues usually reserved for non-fiction, like computer science, musical composition, and in The Overstory’s case, environmentalism. These other works include The Gold Bug Variations, The Echo Maker, and Orfeo.
Key Facts about The Overstory

Extra Credit for The Overstory

Inspiration. Powers had written about environmentalism before, but he became focused on trees and was inspired to write The Overstory after first encountering a giant redwood at Stanford University. 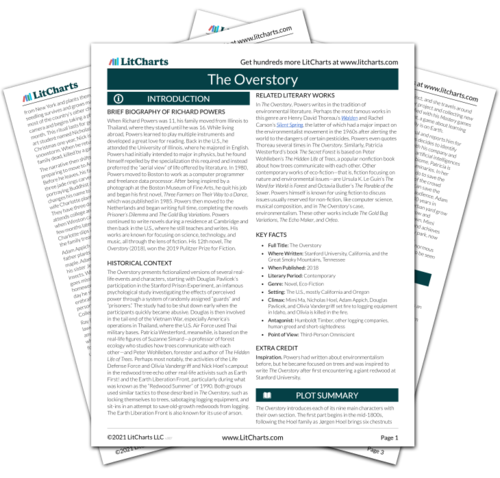 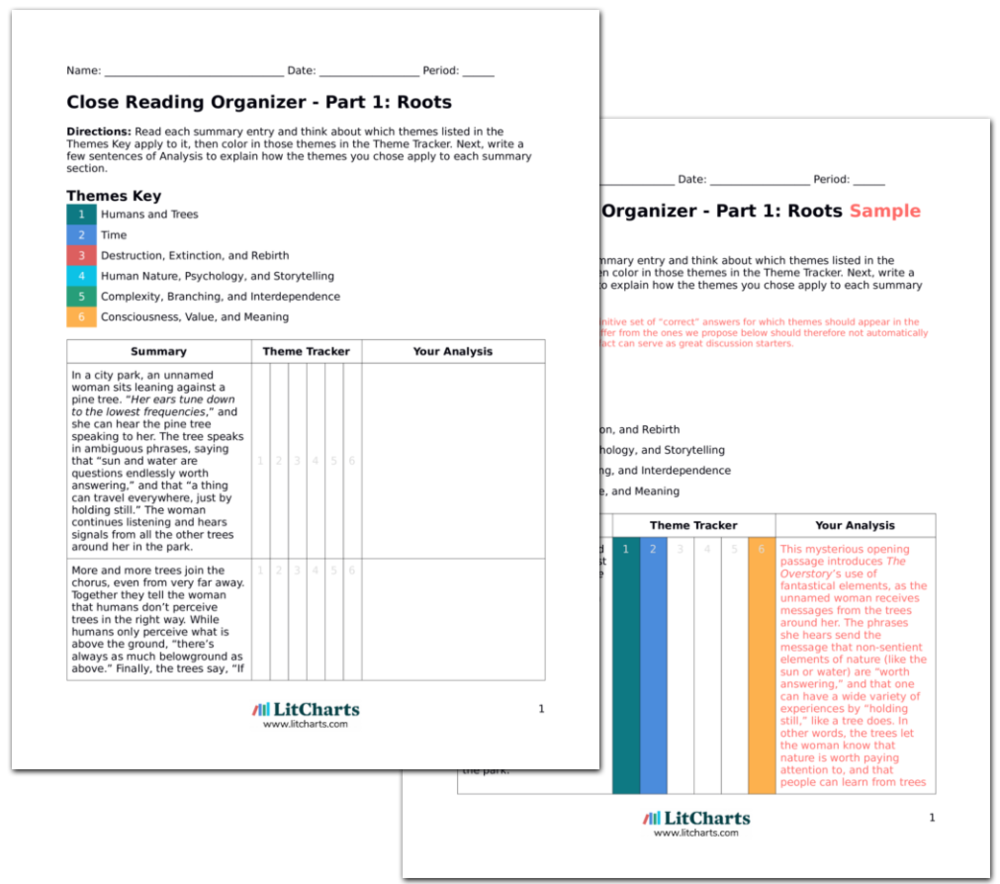