The Prime of Miss Jean Brodie is a Bildungsroman, that is, a novel that has as one of its themes the formative years or spiritual education of a person. In developing this theme the novel dramatizes the distinction between education and intrusion. Miss Brodie herself defines education as a leading out of what is already in a student’s soul, whereas intrusion, she says, is a planting in a student’s mind of what was not there before. Miss Brodie claims to be an educator, whereas she criticizes the headmistress of Blaine, Miss Mackay, for allegedly intruding. The novel as a whole, however, calls into question Miss Brodie’s distinction.

Miss Brodie rarely instructs her girls in history or mathematics; instead, she exposes them to poetry, makeup, world cultures from Italy’s to Egypt’s, as well as radical fascist politics. On the one hand, it does seem to be her intention to open her students’ lives to the world, to heighten their awareness, to liberate them from parochial custom and convention. On the other, Miss Brodie primarily “leads out” of her students their sexual curiosity, with stories about her dead lover Hugh and the like. Under Miss Brodie’s wing, Sandy and Jenny, for example, become preoccupied with sex, talking and giggling about it, fantasizing and writing about it, going so far as to imagine Miss Brodie having sex with their singing teacher Mr. Lowther. But, hypocritically, Miss Brodie also intrudes: she is a dogmatic teacher, who makes assertions and requires that her students be able to regurgitate them verbatim. She even insinuates her plans into her students’ minds—plans as strange and disturbing as having Rose become Mr. Lloyd’s lover as her, Miss Brodie’s, proxy. This is a rather heinous intrusion indeed.

In contrast, the Senior science teacher Miss Lockhart is the novel’s model educator: a priest in relation to her discipline, who does not regard the girls in her class as personalities but, rather more appropriately, as students. She excites their curiosity on the first day by holding up gunpowder in a jar, enough, she says, to blow up the school; it is by leading out their natural curiosity about science that Miss Lockhart is in turn able to provide their now-receptive minds with new information, which Miss Brodie might dismiss as an intrusion but which the novel, perhaps, would simply call good teaching.

The ThemeTracker below shows where, and to what degree, the theme of Education vs. Intrusion appears in each chapter of The Prime of Miss Jean Brodie. Click or tap on any chapter to read its Summary & Analysis.
How often theme appears:
chapter length:
Chapter
Chapter 1
1
Chapter 2
2
Chapter 3
3
Chapter 4
4
Chapter 5
5
Chapter 6
6
Get the entire Miss Jean Brodie LitChart as a printable PDF.
"My students can't get enough of your charts and their results have gone through the roof." -Graham S.
Download 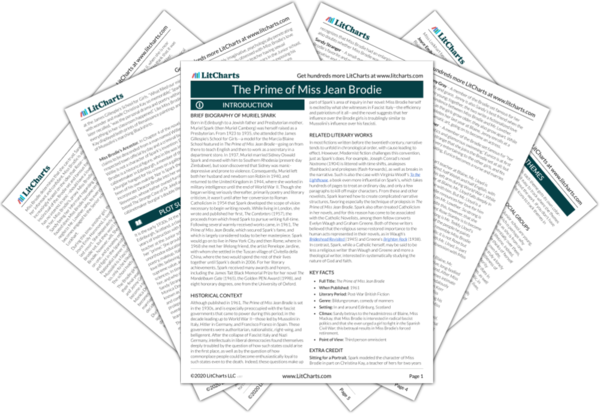 Education vs. Intrusion Quotes in The Prime of Miss Jean Brodie

Below you will find the important quotes in The Prime of Miss Jean Brodie related to the theme of Education vs. Intrusion.
Chapter 1 Quotes

‘I am putting old heads on your young shoulders,’ Miss Brodie had told them at that time, ‘and all my pupils are the crème de la crème.’

‘It has been suggested again that I should apply for a post at one of the progressive schools, where my methods would be more suited to the system than they are at Blaine. But I shall not apply for a post at a crank school. I shall remain at this education factory. There must be a leaven in the lump. Give me a girl at an impressionable age, and she is mine for life.’

‘The word “education” comes from the root e from ex, out, and duco, I lead. It means a leading out. To me education is a leading out of what is already there in the pupil’s soul. To Miss Mackay it is a putting in of something that is not there, and that is not what I call education, I call it intrusion, from the Latin root prefix in meaning in and the stem trudo, I thrust.’

The teachers here [in the Senior school] seemed to have no thoughts of anyone’s personalities apart from their specialty in life, whether it was mathematics, Latin or science. They treated the new first-formers as if they were not real, but only to dealt with, like symbols of algebra, and Miss Brodie’s pupils found this refreshing at first.

‘Phrases like “the team spirit” are always employed to cut across individualism, love and personal loyalties.’

‘What were the main influences of your schooldays, Sister Helena? Were they literary or political or personal? Was it Calvinism?’

Sandy said: ‘There was a Miss Jean Brodie in her prime.’