Download this LitChart! (PDF)
Teachers and parents! Struggling with distance learning? Our Teacher Edition on The Racial Contract can help.

Welcome to the LitCharts study guide on Charles W. Mills's The Racial Contract. Created by the original team behind SparkNotes, LitCharts are the world's best literature guides.

A concise biography of Charles W. Mills plus historical and literary context for The Racial Contract.

A quick-reference summary: The Racial Contract on a single page.

In-depth summary and analysis of every chapter of The Racial Contract. Visual theme-tracking, too.

Explanations, analysis, and visualizations of The Racial Contract's themes.

Description, analysis, and timelines for The Racial Contract's characters.

Description, analysis, and timelines for The Racial Contract's terms.

Explanations of The Racial Contract's symbols, and tracking of where they appear.

An interactive data visualization of The Racial Contract's plot and themes.

Philosopher Charles W. Mills was born and raised in Jamaica, where he studied physics at the University of the West Indies and went on to teach science in local high schools and colleges for several years. He eventually switched to philosophy and completed his PhD at the University of Toronto, where he wrote a dissertation on Karl Marx and Friedrich Engels’s theory of ideology. He briefly taught at the University of Oklahoma before moving to the University of Illinois at Chicago, Northwestern University, and the City University of New York, where he is a Distinguished Professor of Philosophy as of 2020. He was also the president of the Central Division of the American Philosophical Association from 2017–2018. The Racial Contract was Mills’s first book but remains his most widely read work. It also won a Gustavus Myers Outstanding Book Award. Mills’s next book, Blackness Visible: Essays on Philosophy and Race, extended The Racial Contract’s emphasis on colonialism, racism, and white supremacy’s influential role in the history of Western philosophy. Mills also went on to publish From Class to Race: Essays in White Marxism and Black Radicalism (an essay collection on critical race theory) and Radical Theory, Caribbean Reality: Race, Class and Social Domination (a collection of articles about race and class relations in the Caribbean). Most recently, in 2017, Mills published Black Rights/White Wrongs: The Critique of Racial Liberalism, in which he builds on The Racial Contract’s critique of European and American liberal philosophy. As of 2020, Mills is reportedly working on a sequel to Black Rights/White Wrongs.
Get the entire The Racial Contract LitChart as a printable PDF.
"My students can't get enough of your charts and their results have gone through the roof." -Graham S.
Download 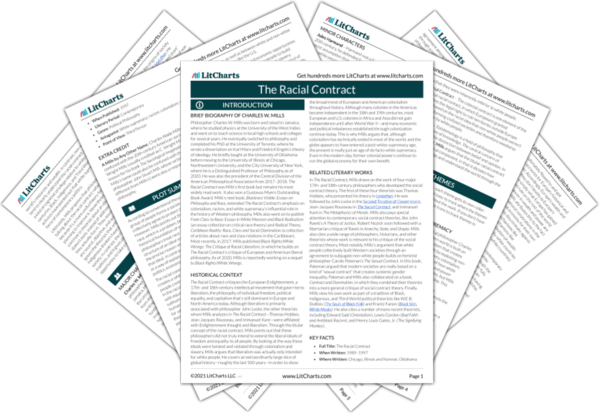 Historical Context of The Racial Contract

The Racial Contract critiques the European Enlightenment, a 17th- and 18th-century intellectual movement that gave rise to liberalism, the philosophy of individual freedom, political equality, and capitalism that’s still dominant in Europe and North America today. Although liberalism is primarily associated with philosopher John Locke, the other theorists whom Mills analyzes in The Racial Contract—Thomas Hobbes, Jean-Jacques Rousseau, and Immanuel Kant—were affiliated with Enlightenment thought and liberalism. Through the titular concept of the racial contract, Mills points out that these philosophers did not truly intend to extend the liberal ideals of freedom and equality to all people. By looking at the way these ideals were twisted and violated through colonialism and slavery, Mills argues that liberalism was actually only intended for white people. He covers an extraordinarily large slice of global history—roughly the last 500 years—in order to show the broad trend of European and American colonialism throughout history. Although many colonies in the Americas became independent in the 18th and 19th centuries, most European and U.S. colonies in Africa and Asia did not gain independence until after World War II—and many economic and political imbalances established through colonization continue today. This is why Mills argues that, although colonialism has technically ended in most of the world, and the globe appears to have entered a post-white-supremacy age, the present is really just an age of de facto white supremacy. Even in the modern day, former colonial powers continue to run the global economy for their own benefit.

Other Books Related to The Racial Contract

In The Racial Contract, Mills draws on the work of four major 17th- and 18th-century philosophers who developed the social contract theory. The first of these four theorists was Thomas Hobbes, who presented his theory in Leviathan. He was followed by John Locke in the Second Treatise of Government, Jean-Jacques Rousseau in The Social Contract, and Immanuel Kant in The Metaphysics of Morals. Mills also pays special attention to contemporary social contract theories, like John Rawls’s A Theory of Justice. Robert Nozick soon followed with a libertarian critique of Rawls in Anarchy, State, and Utopia. Mills also cites a wide range of philosophers, historians, and other theorists whose work is relevant to his critique of the social contract theory. Most notably, Mills’s argument that white people collectively built Western societies through an agreement to subjugate non-white people builds on feminist philosopher Carole Pateman’s The Sexual Contract. In this book, Pateman argued that modern societies are really based on a kind of “sexual contract” that creates systemic gender inequality. Pateman and Mills also collaborated on a book, Contract and Domination, in which they combined their theories into a more general critique of social contract theory. Finally, Mills view his own work as part of a tradition of Black, Indigenous, and Third World political theorists like W.E.B. DuBois (The Souls of Black Folk) and Frantz Fanon (Black Skin, White Masks). He also cites a number of more recent theorists, including Edward Said (Orientalism), Lewis Gordon (Bad Faith and Antiblack Racism), and Henry Louis Gates, Jr. (The Signifying Monkey).
Key Facts about The Racial Contract

Extra Credit for The Racial Contract

A Mills by Any Other Name. Charles Wade Mills should not be confused with the 20th-century American sociologist Charles Wright Mills (usually credited as C. Wright Mills), who is best known for his book The Sociological Imagination. Charles W. Mills’s name could also be confused with the 19th-century philosopher John Stuart Mill, whose writings (though very different from Mills’s) were also a response to Enlightenment philosophy. 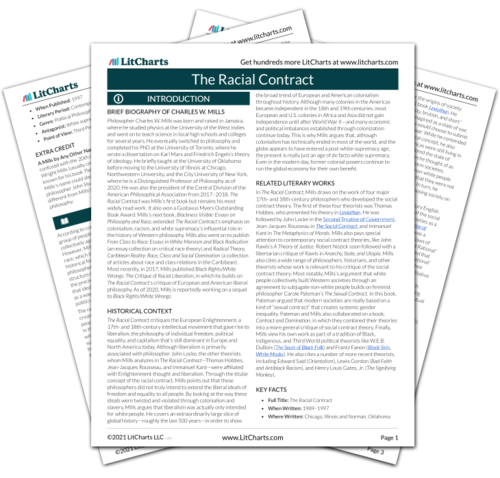 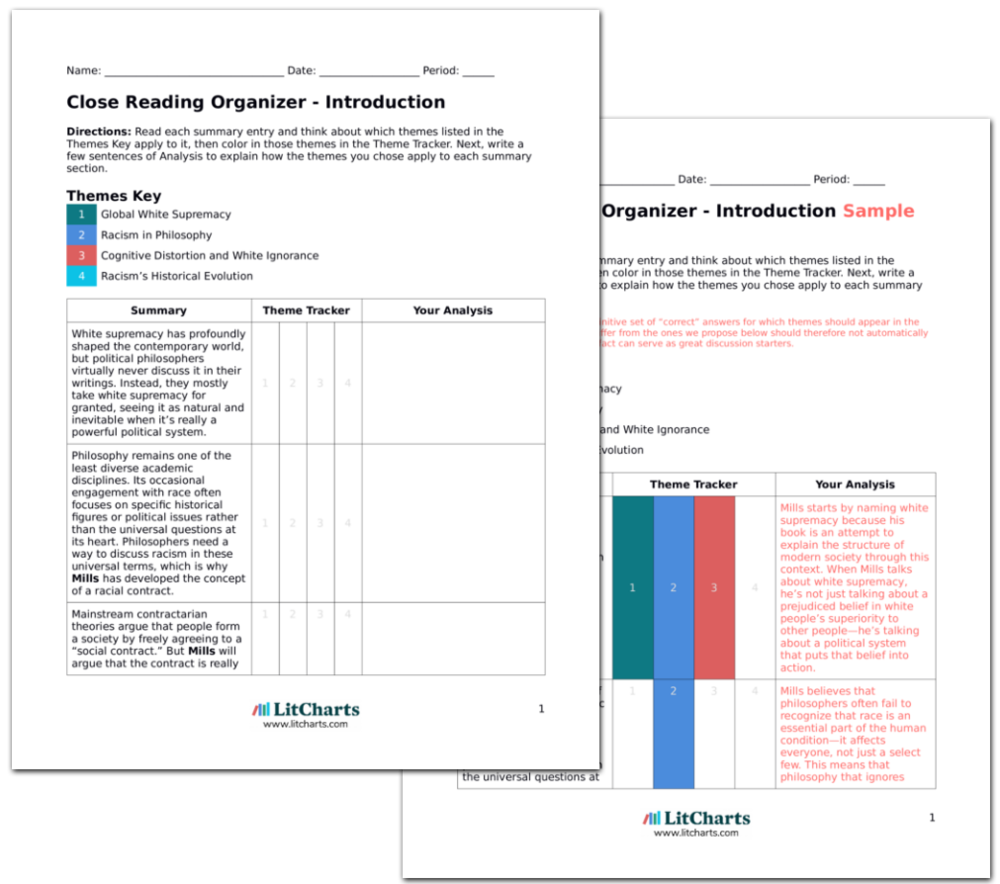