A concise biography of Frantz Fanon plus historical and literary context for Black Skin, White Masks.

In-depth summary and analysis of every chapter of Black Skin, White Masks. Visual theme-tracking, too.

Explanations of Black Skin, White Masks's symbols, and tracking of where they appear.

Frantz Fanon was born to a middle-class family in Fort-de-France, Martinique, in 1925. He attended the most competitive secondary school in Martinique, where he was taught by the Martinican anti-imperialist scholar, poet, and politician Aimé Césaire. During the Second World War, Fanon traveled to Dominica to join the Free French Forces and fight the fascist Vichy regime. He was awarded the Croix de guerre, a French military honor. Fanon returned to Martinique and supported Césaire’s run for office on the communist party ticket. He then traveled to Lyon to finish his education, qualifying as a psychiatrist in 1951. While completing his residency in psychiatry in Saint-Alban-sur-Limagnole, he wrote his first book, Black Skin, White Masks, which was published in 1952. Fanon then moved to Algeria, where he worked in a psychiatric hospital, treating both the French soldiers who had been traumatized by torturing Algerians as well as the Algerian torture victims. This experience had a profound impact on Fanon, and he gradually began to focus more on supporting the Algerian liberation efforts, eventually resigning from the French hospital, and shortly afterwards he was expelled from Algeria by the French government. Fanon married a white French woman named Josie and had two children, one from a previous relationship. His most well-known book, The Wretched of the Earth, was published just before his death from leukemia in 1961 at the age of 36.
Get the entire Black Skin, White Masks LitChart as a printable PDF.
"My students can't get enough of your charts and their results have gone through the roof." -Graham S.
Download 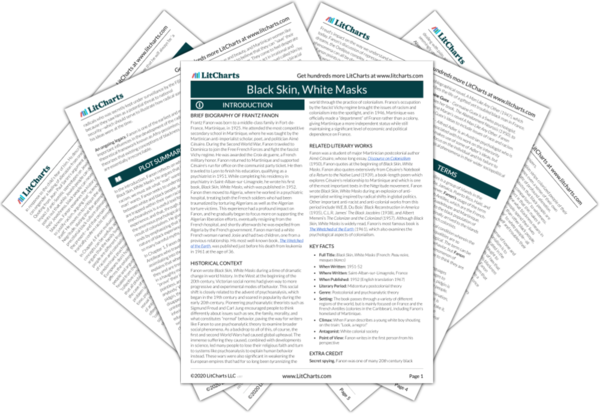 Fanon wrote Black Skin, White Masks during a time of dramatic change in world history. In the West at the beginning of the 20th century, Victorian social norms had given way to more progressive and experimental modes of behavior. This social shift is closely related to the advent of psychoanalysis, which began in the 19th century and soared in popularity during the early 20th century. Pioneering psychoanalytic theorists such as Sigmund Freud and Carl Jung encouraged people to think differently about issues such as sex, the family, morality, and what constitutes “normal” behavior, paving the way for writers like Fanon to use psychoanalytic theory to examine broader social phenomena. As a backdrop to all of this, of course, the first and second World Wars had caused global upheaval. The immense suffering they caused, combined with developments in science, led many people to lose their religious faith and turn to systems like psychoanalysis to explain human behavior instead. These wars were also significant in weakening the European empires that had for so long been tyrannizing the world through the practice of colonialism. France’s occupation by the fascist Vichy regime brought the issues of racism and colonialism into the spotlight, and in 1946, Martinique was officially made a “department” of France rather than a colony, giving Martinique a more independent status while still maintaining a significant level of economic and political dependence on France.

Fanon was a student of major Martinician postcolonial author Aimé Césaire, whose long essay, Discourse on Colonialism (1950), Fanon quotes at the beginning of Black Skin, White Masks. Fanon also quotes extensively from Césaire’s Notebook of a Return to the Native Land (1939), a book-length poem which explores Césaire’s relationship to Martinique and which is one of the most important texts in the Négritude movement. Fanon wrote Black Skin, White Masks during an explosion of anti-imperialist writing inspired by radical shifts in global politics. Other important anti-racist and anti-colonial works from this period include W.E.B. Du Bois’ Black Reconstruction in America (1935), C.L.R. James’ The Black Jacobins (1938), and Albert Memmi’s The Colonizer and the Colonized (1957). Although Black Skin, White Masks is widely read, Fanon’s most famous book is The Wretched of the Earth (1961), which also examines the psychological aspects of colonialism.
Key Facts about Black Skin, White Masks

Secret spying. Fanon was one of many 20th century black radicals who was secretly kept under surveillance by the FBI because they saw him as a potential threat to national security—which should serve to illustrate how radical some of his ideas were at the time.

An ongoing legacy. Fanon is one of the earliest and most important influences in the development of the radical theoretical framework known as Afro-pessimism, which theorizes that existing conceptions of blackness and humanity are essentially irreconcilable.