Download this LitChart! (PDF)
Teachers and parents! Struggling with distance learning? Our Teacher Edition on The Return of the Soldier can help.

It’s March, 1916, during World War I. Kitty Baldry hasn’t heard from her husband, Chris, who’s fighting on the Western Front, for two weeks, but she’s trying not to fret. Chris’s cousin, Jenny, who lives at Baldry Court with Kitty and has been devoted to Chris all her life, is also worried. She tries to take comfort in the beautiful house and grounds they’ve worked so hard to maintain for Chris, believing that these rich surroundings make him happy and content. Even before the war, Chris’s life had been difficult—he inherited his father’s failing business and a job he didn’t want, and his and Kitty’s baby son, Oliver, died five years ago.

A visitor arrives at Baldry Court—Mrs. William Grey from neighboring Wealdstone. Kitty has never heard of her and doesn’t know anyone from the suburbs, but she figures the woman is looking for charity. In the hall, Kitty and Jenny find an unfashionably dressed, work-worn woman who’s clearly lower-class. Mrs. Grey (Margaret) claims to have received word that Chris has suffered shell-shock on the front. Kitty doesn’t believe Margaret, questions her harshly, and finally dismisses her as a fraud, making Jenny uncomfortable. Margaret hands them a telegram from Chris that was sent to her old residence, then leaves in tears. Kitty tells Jenny that whether Chris has truly gone mad or has secretly harbored affection for this objectionable woman, he’s lost to them either way.

The next morning, Jenny receives a letter from a cousin, Frank Baldry, who received a telegram from Chris and went to visit him in the Red Cross hospital in France. Frank found Chris in a strange state—acting “boyishly” and claiming to be in love with a girl named Margaret Allington. When Frank asked Chris what Kitty thought of all this, Chris didn’t know who Kitty was—he thought it was still 1901. When Chris learned that it was actually 1916, he fainted. Frank warns Jenny to prepare Kitty for the shock of Chris’s homecoming.

A week later, Chris returns to Baldry Court. It’s immediately clear that he does not recognize Kitty and is jarred by Jenny’s age and the remodeled house. Kitty changes into a white dress for dinner, hoping to remind Chris of their wedding day, to no avail. Chris explains to Kitty that he must see Margaret, and she agrees, but Jenny notices the hateful expression on Kitty’s face. After Kitty storms off to bed, Chris begins to talk to Jenny about the last memories that feel real to him—his visits to Monkey Island 15 years ago.

While visiting his Uncle Ambrose, Chris used to walk to the Monkey Island Inn. He and the innkeeper’s shy, thoughtful daughter, Margaret Allington, would sit and talk for hours. His last memory is of the day he found Margaret alone on the island; they declared their love for one another, and when he saw Margaret glowing indistinctly in the moonlight, Chris felt that neither Margaret nor his feelings for her could ever change.

The next day, Jenny goes to Wealdstone to fetch Margaret. Jenny feels repulsed by Margaret’s modest suburban home and the fact that Margaret is covered with flour and sweat from working in the kitchen. She persuades Margaret to visit Chris, and Margaret, weeping with longing, agrees. As they ride to Baldry Court, Margaret explains how her romance with Chris ended—a misunderstanding over Margaret’s friendship with a neighbor boy. Soon after that, Margaret’s father had died, and two years later, she married Mr. Grey, an unsuccessful, sickly man who requires a lot of tending. Recently, she revisited Monkey Island for the first time and was given old letters from Chris that had never been forwarded, as well as the telegram from the front.

At Baldry Court, Jenny notices the contrast between Margaret’s shabby appearance and the opulence of the estate, and she dreads Margaret’s reunion with Chris. But as she and Kitty watch from a window, Chris and Margaret embrace joyfully and immediately begin an animated conversation, as if they’d never parted. Jenny was sure that Chris could never love Margaret as she is today, but she realizes she was wrong.

In the coming days, Margaret continues to visit, and Chris blossoms in her presence, while Kitty grows depressed and Jenny grieves. Various doctors come to Baldry Court in an effort to help Chris regain sanity. One day, after a week, Jenny goes looking for Chris and Margaret to remind them that another doctor is coming by. Though she’s been wrapped up in jealousy, she is stunned by their beauty when she comes upon them sitting in the woods. Margaret is watching over a sleeping Chris, and Jenny feels that Margaret’s soul offers Chris’s soul a healing shelter. In that way, Jenny thinks, Margaret has given a gift to all of them. What’s more, if Chris doesn’t regain his memory, he cannot be sent back to the front.

Back at the house, Chris goes off with Dr. Gilbert Anderson while Jenny and Margaret go upstairs and talk. When Margaret sees Jenny’s photograph of baby Oliver and learns what happened to him, Margaret reveals that she, too, had a two-year-old son, Dick, who died five years ago. In contrast to the peaceful scene in the woods, Margaret’s raw grief gives Jenny a sense of foreboding.

Gathering with the others, the women hear Dr. Anderson’s explanation of amnesia as an act of Chris’s unconscious self—he’s refusing to let himself remember the present for some reason. Dr. Anderson says this is because Chris is suppressing some sort of strong desire. Kitty and Jenny can’t guess what this desire might be, but Margaret says that Chris has always had a dependent nature and yearned for love, revealing that she knows him better than the others do. She suggests that a jarring memory would bring Chris back to the present—like the memory of his little boy’s death.

Margaret and Jenny go to Oliver’s nursery to find some of the baby’s old belongings. Margaret weeps, saying that there’s nothing more important than happiness, and she can’t bear for Chris to lose it. But when a tearful Kitty walks past, Margaret and Jenny agree that if they truly love Chris, they must try to cure him. If Chris remains stuck in the past, he will eventually become a pitiable, eccentric figure, and they must spare him that for his dignity’s sake. Margaret goes to Chris with Oliver’s things.

Jenny collapses in sadness, then looks outside at Kitty’s urging. On the lawn, Margaret has receded into the shadows, and Jenny is shaken by the sight of Chris, staring hopelessly toward the house, now walking with a soldier’s step instead of a boy’s. Looking over Jenny’s shoulder, Kitty says with satisfaction, “He’s cured!” 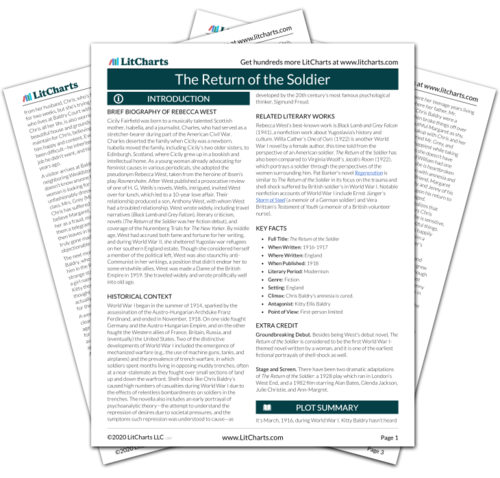 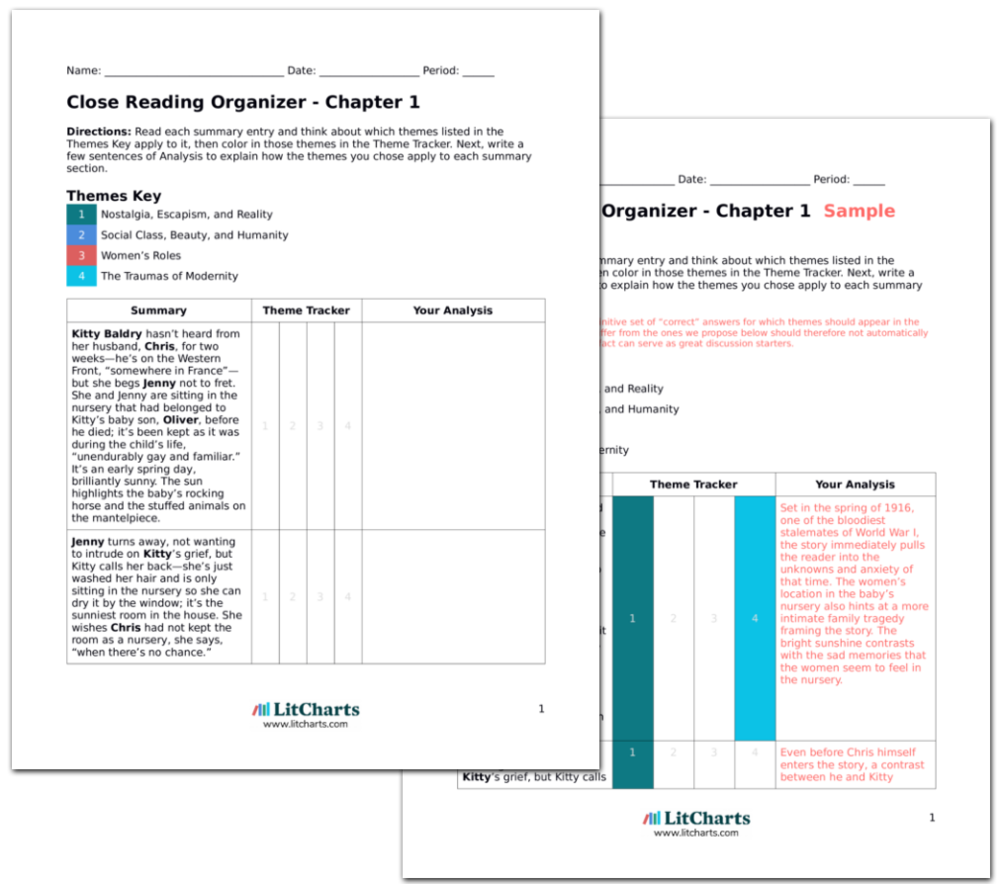