Welcome to the LitCharts study guide on Sir Arthur Conan Doyle's The Sign of the Four. Created by the original team behind SparkNotes, LitCharts are the world's best literature guides.

A concise biography of Sir Arthur Conan Doyle plus historical and literary context for The Sign of the Four.

A quick-reference summary: The Sign of the Four on a single page.

In-depth summary and analysis of every chapter of The Sign of the Four. Visual theme-tracking, too.

Explanations, analysis, and visualizations of The Sign of the Four's themes.

The Sign of the Four's important quotes, sortable by theme, character, or chapter.

Description, analysis, and timelines for The Sign of the Four's characters.

Explanations of The Sign of the Four's symbols, and tracking of where they appear.

An interactive data visualization of The Sign of the Four's plot and themes.

Arthur Conan Doyle was born to Irish Catholic parents in Scotland during the middle of the Queen Victoria’s reign over the United Kingdom. Despite his later reputation as a frequenter of the London gentlemen’s clubs, Doyle’s upbringing was tough—his father, Charles Doyle, suffered from alcoholism and psychiatric illness. Doyle’s wealthy uncles paid for their nephew to board at the Hodder Place school in Lancashire from 1868 to 1870, though Doyle found its methods harsh and outdated. He also spent time a school in Austria. He later went to medical school in Edinburgh, training as a doctor under the tutelage of Dr. Joseph Bell, whose astute methods of observation and diagnosis were to have a great effect on Doyle’s writing. During this period, Doyle started composing stories but didn’t publish any until a few years later. In 1885, Doyle married his first wife, Louisa Hawkins, and had two children with her. His first Sherlock Holmes story, A Study in Scarlet, was published when Doyle was 27 and was well received. The Sign of the Four followed in 1890, though Doyle felt that his publishers had taken advantage of him and coerced him into unfavorable terms. Doyle went on to write a total of 60 Sherlock Holmes stories (four of them novel-length), though he was famously ambivalent about his most successful creation. At one point, his own mother talked him out of killing off the famous detective. Doyle’s first wife, Louisa, died in 1893, and he subsequently remarried with Jean Leckie and had three children with her. Outside of his writing, Doyle was a keen sportsman and an active participant in the political scene. He also became an avid supporter of the Spiritualist movement, peaking in a memorable episode in which Doyle advocated for the authenticity of a photograph seemingly showing a young girl enjoying the company of fairies in her garden. Towards the end of his life, Doyle was diagnosed with Angina Pectoris. Ignoring his doctor’s advice to rest up, Doyle embarked on a Spiritualism tour of the Netherlands in 1929 and was bedridden on his return home. He died in his garden in the summer of 1930.
Get the entire The Sign of the Four LitChart as a printable PDF.
"My students can't get enough of your charts and their results have gone through the roof." -Graham S.
Download 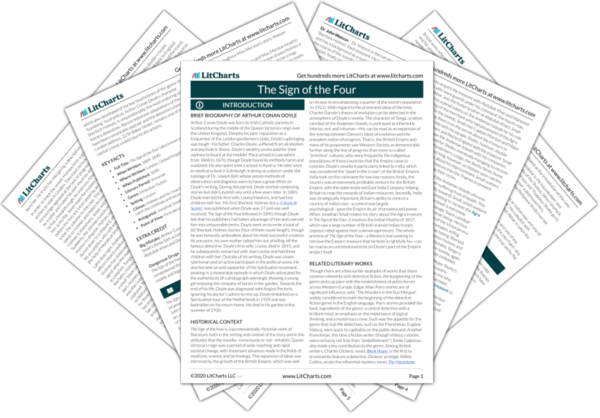 The Sign of the Four is a quintessentially Victorian work of literature, both in the setting and context of the story and in the attitudes that the novella—consciously or not—inhabits. Queen Victoria’s reign was a period of wide-reaching and rapid societal change, with important advances made in the fields of medicine, science and technology. This expansion of ideas was mirrored by the growth of the British Empire, which was well on its way to encompassing a quarter of the world’s population (in 1922). With regard to the prominent ideas of the time, Charles Darwin’s theory of evolution can be detected in the atmosphere of Doyle’s novella. The character of Tonga, a native cannibal of the Andaman Islands, is portrayed as inherently inferior, evil, and inhuman—this can be read as an expansion of the overlap between Darwin’s ideas of evolution and the prevalent notion of progress. That is, the British Empire and many of its proponents saw Western Society as demonstrably further along the line of progress than more so-called “primitive” cultures, who were frequently the indigenous populations of those countries that the Empire came to colonize. Doyle’s novella is particularly linked to India, which was considered the “jewel in the crown” of the British Empire. India took on this nickname for two key reasons: firstly, the country was an extremely profitable venture for the British Empire, with the state-endorsed East India Company helping Britain to reap the rewards of Indian resources. Secondly, India was strategically important; Britain’s ability to control a country of India’s size—a control was largely psychological—gave the Empire its air of prowess and power. When Jonathan Small relates his story about the Agra treasure in The Sign of the Four, it involves the Indian Mutiny of 1857, which saw a large number of British-trained Indian troops (sepoys) rebel against their colonial oppressors. The whole premise of The Sign of the Four—a Western man seeking to retrieve the Eastern treasure that he feels is rightfully his—can be read as an unintentional echo on Doyle’s part of the Empire project itself.

Other Books Related to The Sign of the Four

Though there are a few earlier examples of works that share common elements with detective fiction, the burgeoning of the genre picks up pace with the establishment of police forces across Western Europe. Edgar Allan Poe’s stories are of significant influence, with “The Murders in the Rue Morgue” widely considered to mark the beginning of the detective fiction genre in the English language. Poe’s stories provided the basic ingredients of the genre: a central detective with a brilliant mind, an emphasis on the importance of logical thinking, and a mysterious crime. Such was the appetite for the genre that real-life detectives, such as the Frenchman, Eugène Vidocq, were quick to capitalize on the public demand. Another Frenchman, this time a fiction writer (though Vidocq’s stories were certainly not free from “embellishment”), Emile Gaboriau also made a key contribution to the genre. Among British writers, Charles Dickens’ novel, Bleak House, is the first to prominently feature a detective. Dickens’ protégé, Wilkie Collins, wrote the influential mystery novel, The Moonstone, which also developed of the key touchstones of the genre (the “bumbling” local police). Arthur Conan Doyle’s character, Sherlock Holmes, is unquestionably the most enduring of the literary detectives. Recent television adaptations of the stories have been remarkably popular and the detective’s famous London address, 221b Baker Street, remains one of the U.K. capital’s most visited tourist attractions.
Key Facts about The Sign of the Four

Dangerous Drugs. Though Sherlock Holmes’ use of cocaine in The Sign of the Four is shocking to modern readers, it should be remembered that at the time of the story’s setting the drug was widely and legally obtainable. 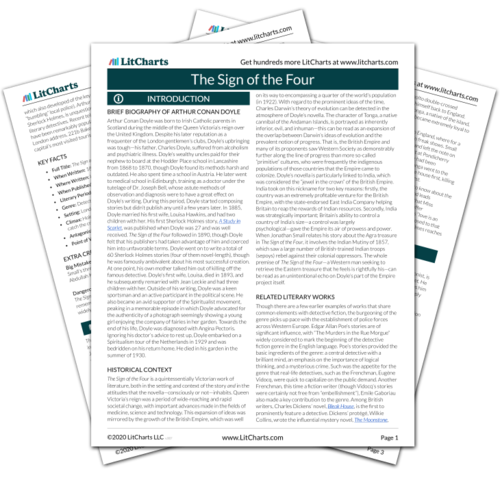 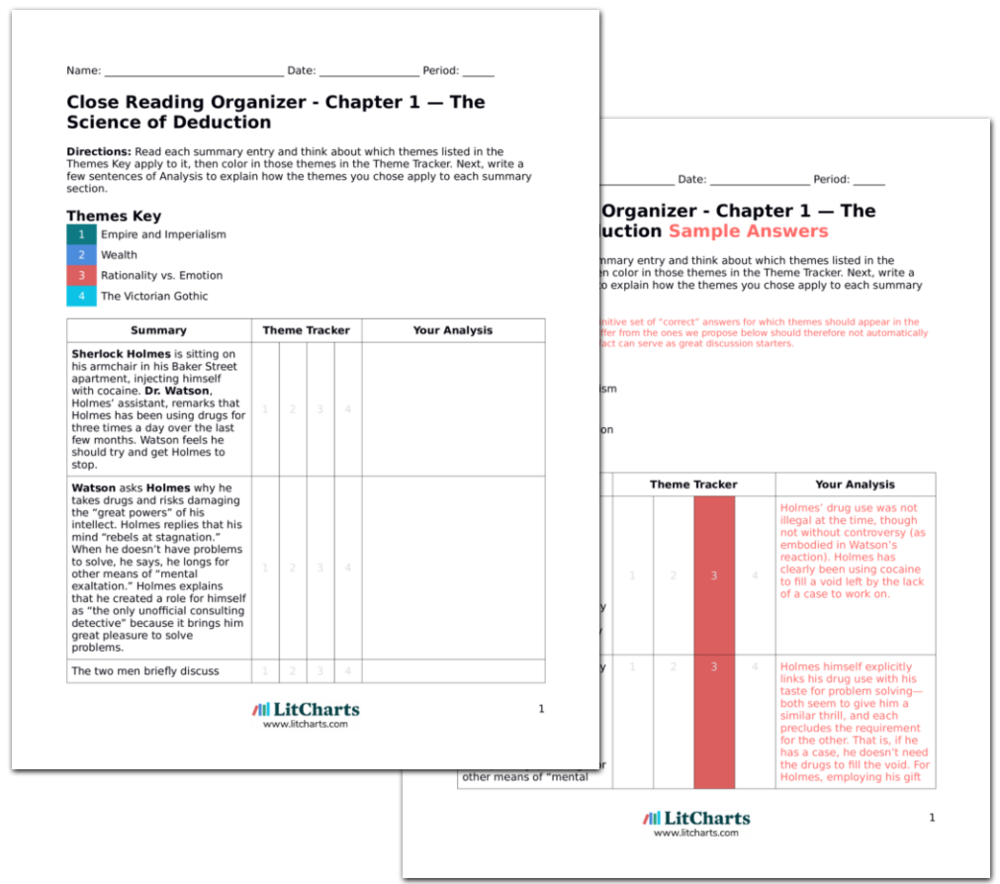