Download this LitChart! (PDF)
Teachers and parents! Struggling with distance learning? Our Teacher Edition on The Sisters can help.

Welcome to the LitCharts study guide on James Joyce's The Sisters. Created by the original team behind SparkNotes, LitCharts are the world's best literature guides.

A concise biography of James Joyce plus historical and literary context for The Sisters.

A quick-reference summary: The Sisters on a single page.

In-depth summary and analysis of every of The Sisters. Visual theme-tracking, too.

Explanations, analysis, and visualizations of The Sisters's themes.

The Sisters's important quotes, sortable by theme, character, or .

Description, analysis, and timelines for The Sisters's characters.

Explanations of The Sisters's symbols, and tracking of where they appear.

An interactive data visualization of The Sisters's plot and themes.

James Joyce was born into an Irish middle-class family in 1882. From a young age, Joyce excelled in school, and was particularly interested in classical studies. After graduating from Jesuit high school, Joyce attended University College Dublin, where he studied English, French, and Italian. Joyce was baptized in the Catholic Church, though his father was critical of the institution and Joyce began to distance himself from the faith at an early age. While in college, Joyce wrote essays and literary criticism. He also began writing Portrait of the Artist as a Young Man, but temporarily abandoned the manuscript after it was rejected. After graduating from his university, he met Nora Barnacle, who would become his wife, and the couple moved to continental Europe. While much of Joyce’s work centers on Dublin and Irish politics, he actually didn’t live in Ireland for most of his adult life. In 1914, he published Dubliners, his first major work, which tells the stories of middle-class Dublin citizens. This was followed by the publication of A Portrait of the Artist as a Young Man in 1916, based on the university manuscript he had abandoned. His most notable work, Ulysses, was published in 1922, and takes as its inspiration Homer’s Odyssey. Joyce died in 1941 in Zurich after falling into a coma after surgery.
Get the entire The Sisters LitChart as a printable PDF.
"My students can't get enough of your charts and their results have gone through the roof." -Graham S.
Download 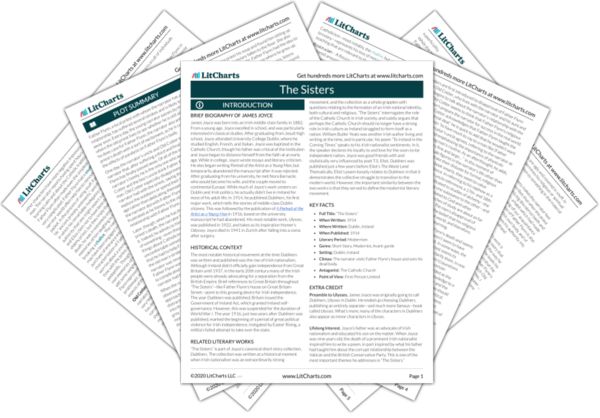 Historical Context of The Sisters

The most notable historical movement at the time Dubliners was written and published was the rise of Irish nationalism. Although Ireland didn’t officially gain independence from Great Britain until 1937, in the early 20th century many of the Irish people were already advocating for a separation from the British Empire. Brief references to Great Britain throughout “The Sisters”—like Father Flynn’s house on Great Britain Street—point to this growing desire for Irish independence. The year Dubliners was published, Britain issued the Government of Ireland Act, which granted Ireland self-governance. However, this was suspended for the duration of World War I. The year 1916, just two years after Dubliners was published, marked the beginning of a period of great political violence for Irish independence, instigated by Easter Rising, a militia’s failed attempt to take over the state.

Other Books Related to The Sisters

“The Sisters” is part of Joyce’s canonical short story collection, Dubliners. The collection was written at a historical moment when Irish nationalism was an extraordinarily strong movement, and the collection as a whole grapples with questions relating to the formation of an Irish national identity, both cultural and religious. “The Sisters” interrogates the role of the Catholic Church in Irish society, and subtly argues that perhaps the Catholic Church should no longer have a strong role in Irish culture as Ireland struggled to form itself as a nation. William Butler Yeats was another Irish author living and writing at the time, and in particular, his poem “To Ireland in the Coming Times” speaks to his Irish nationalist sentiments. In it, the speaker declares his loyalty to and love for the soon-to-be independent nation. Joyce was good friends with and stylistically very influenced by poet T.S. Eliot. Dubliners was published just a few years before Eliot’s The Waste Land. Thematically, Eliot’s poem loosely relates to Dubliners in that it demonstrates the collective struggle to transition to the modern world. However, the important similarity between the two works is that they served to define the modernist literary movement.
Key Facts about The Sisters

Extra Credit for The Sisters

Preamble to Ulysses. James Joyce was originally going to call Dubliners, Ulysses in Dublin. He ended up choosing Dubliners, publishing an entirely separate—and much more famous—book called Ulysses. What’s more, many of the characters in Dubliners also appear as minor characters in Ulysses.

Lifelong Interest. Joyce’s father was an advocate of Irish nationalism and educated his son on the matter. When Joyce was nine years old, the death of a prominent Irish nationalist inspired him to write a poem, in part inspired by what his father had taught him about the corrupt relationship between the Vatican and the British Conservative Party. This is one of the most important themes he addresses in “The Sisters.” 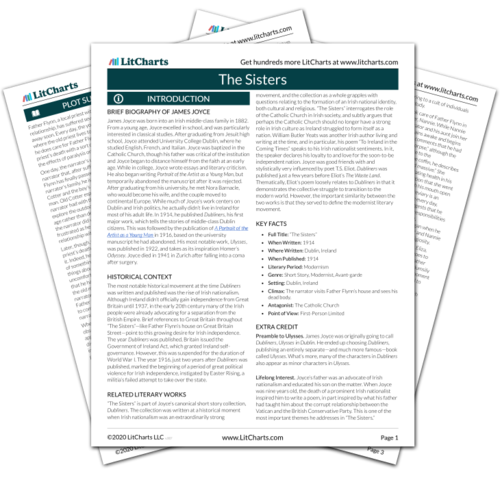 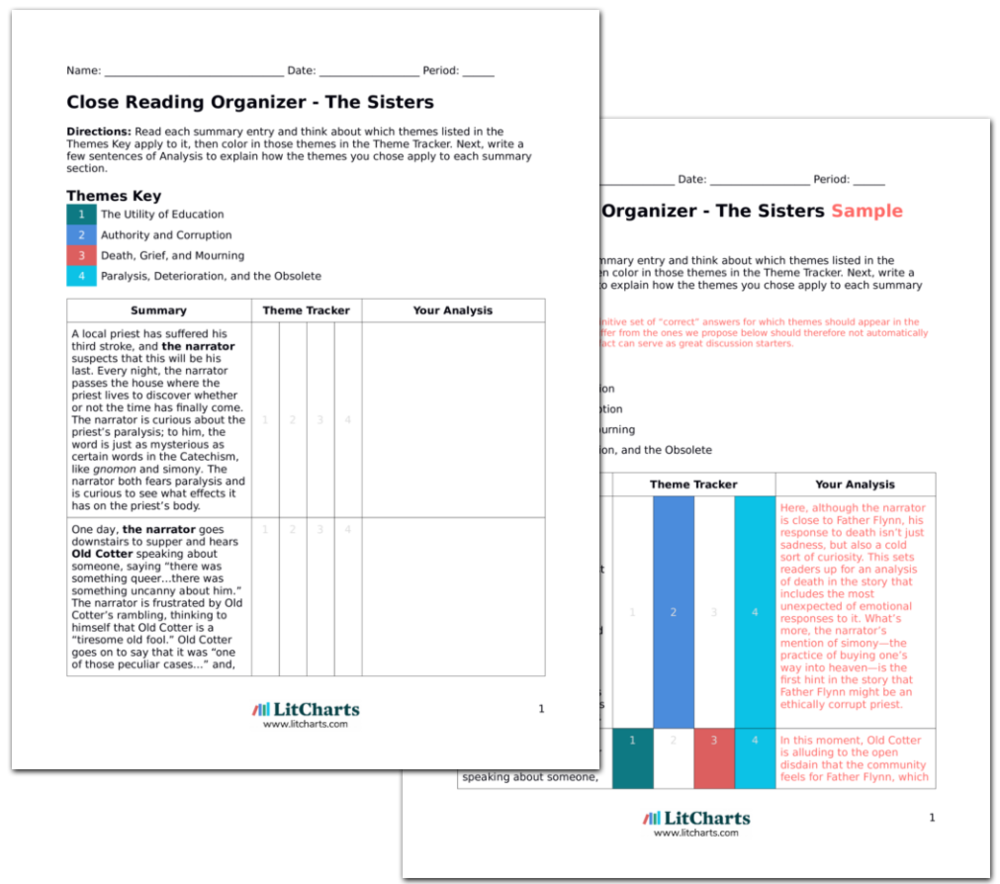