Get LitCharts A+
One of Lia’s primary doctors (along with his wife, Peggy Philp) at Merced Community Medical Center. Neil is a highly intelligent and inquisitive pediatrician who specializes in infections, asthma, and allergies. Incredibly driven and willing to seek out the truth even if it unearths his own mistakes, Neil eventually comes to believe that Foua and Nao Kao are unfit to care for Lia, due to the fact that they refuse (or fail to understand how) to comply with the medicinal regimen he prescribes for their daughter. Although he never asks them what, exactly, they believe, Neil tries to explain the importance of closely adhering to the prescriptions he issues. Eventually, when he fails to get through to the Lees, he writes to Child Protective Services and suggests that Lia be placed into foster care. Despite his frustrations with the Lee family, he develops a complicated bond with them. When Fadiman, who interviewed him extensively for The Spirit Catches You And You Fall Down, asks if he wishes he never met Lia, he says, “Once I might have said yes, but not in retrospect. Lia taught me that when there is a very dense cultural barrier, you do the best you can, and if something happens despite that, you have to be satisfied with little successes instead of total successes.”

The The Spirit Catches You and You Fall Down quotes below are all either spoken by Neil Ernst or refer to Neil Ernst. For each quote, you can also see the other characters and themes related to it (each theme is indicated by its own dot and icon, like this one:

). Note: all page numbers and citation info for the quotes below refer to the Farrar, Straus, and Giroux edition of The Spirit Catches You and You Fall Down published in 2012.
Chapter 5 Quotes

Neil was pretty sure, however, that because Lia’s condition was progressive and unpredictable, he could treat it best by constantly fine-tuning her drug regimen. If he had chosen a single pretty-good anticonvulsant and stuck with it, he would have had to decide that Lia wasn’t going to get the same care he would have given the daughter of a middle-class American family who would have been willing and able to comply with a complex course of treatment. Which would have been more discriminatory, to deprive Lia of the optimal care that another child would have received, or to fail to tailor her treatment in such a way that her family would be most likely to comply with it?

A decade ago, that is not the way Neil looked at the situation. He never seriously considered lowering his standard of care. His job, as he saw it, was to practice good medicine; the Lees’ job was to comply.

Once I asked Neil if he wished he had done anything differently. He answered as I expected, focusing not on his relationship with the Lees but on his choice of medication. “I wish we’d used Depakene sooner,” he said. “I wish I’d accepted that it would be easier for the family to comply with one medicine instead of three, even if three seemed medically optimal.”

Then I asked, “Do you wish you had never met Lia?”

“Oh, no, no, no!” His vehemence surprised me. “Once I might have said yes, but not in retrospect. Lia taught me that when there is a very dense cultural barrier, you do the best you can, and if something happens despite that, you have to be satisfied with little successes instead of total successes. You have to give up total control. That is very hard for me, but I do try. I think Lia made me into a less rigid person.”

Unlock with LitCharts A+
Get the entire The Spirit Catches You LitChart as a printable PDF.
"My students can't get enough of your charts and their results have gone through the roof." -Graham S.
Download 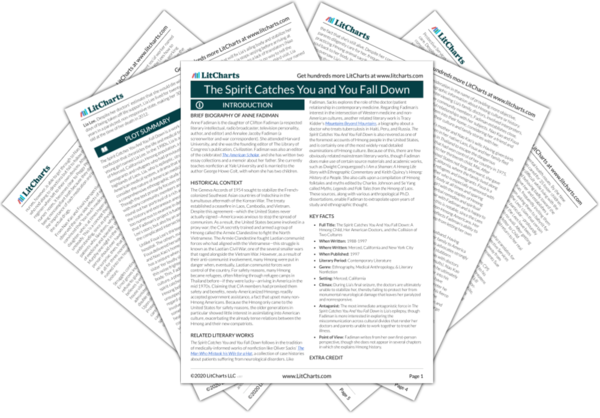 The timeline below shows where the character Neil Ernst appears in The Spirit Catches You and You Fall Down. The colored dots and icons indicate which themes are associated with that appearance.

As Lia’s trips to MCMC became more frequent, her primary pediatricians, Neil Ernst and Peggy Philp (a married couple) came to know her and her parents very... (full context)

...they didn’t want to give Lia the prescribed medications, she remained unsure. Both she and Neil were becoming frustrated with the level of miscommunication between them and the Lees and started... (full context)

...words),’” and posited that it was possible the child suffered from developmental delay. She and Neil—though not surprised—were upset by this conclusion because they wholeheartedly believed it could have been avoided... (full context)

Unlike other doctors, Fadiman points out, Neil Ernst remained unbending in his care for Lia, ultimately unwilling to compromise the quality of... (full context)

Not long thereafter, Lia was admitted to MCMC once again, at which point Neil saw that the Depakene—which seemed to have been so effective—wasn’t working. He began to worry... (full context)

...was thrashing so hard that none of them could get the needle into a vein. Neil, who was at home preparing to go away for the long weekend, was paged to... (full context)

When Neil arrived at MCMC, the doctors continued to have trouble establishing an IV line, and Lia... (full context)

...tried to describe what it was like to see Lia in such a terrible state. Neil admitted that, after all of his efforts and the building of tension before her cataclysmic... (full context)

The first time Neil saw Lia in a routine checkup after her final seizure, he found himself very emotional.... (full context)

Fadiman repeated Hutchinson’s theory to Neil and Peggy, who pored through their notes before determining that it was indeed a possibility... (full context)

...she thought the Lees would respond and brought the results to Kleinman. In contrast to Neil and Peggy, who were baffled to learn what the Lees actually believed, Kleinman was excited... (full context)

...have been better if she had been treated by somebody like Arthur Kleinman instead of Neil Ernst and Peggy Philp. Regardless, she says, the real culprit of Lia’s demise was no... (full context)

...and families are fully involved with their medical treatments and free to voice their wishes. Neil and Peggy joined Dan’s practice and often think about Lia—they think that the results of... (full context) 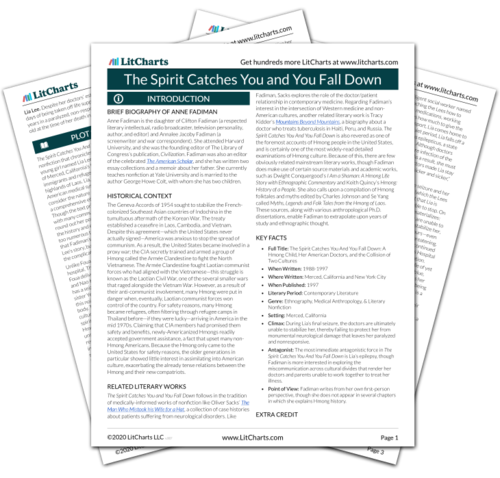 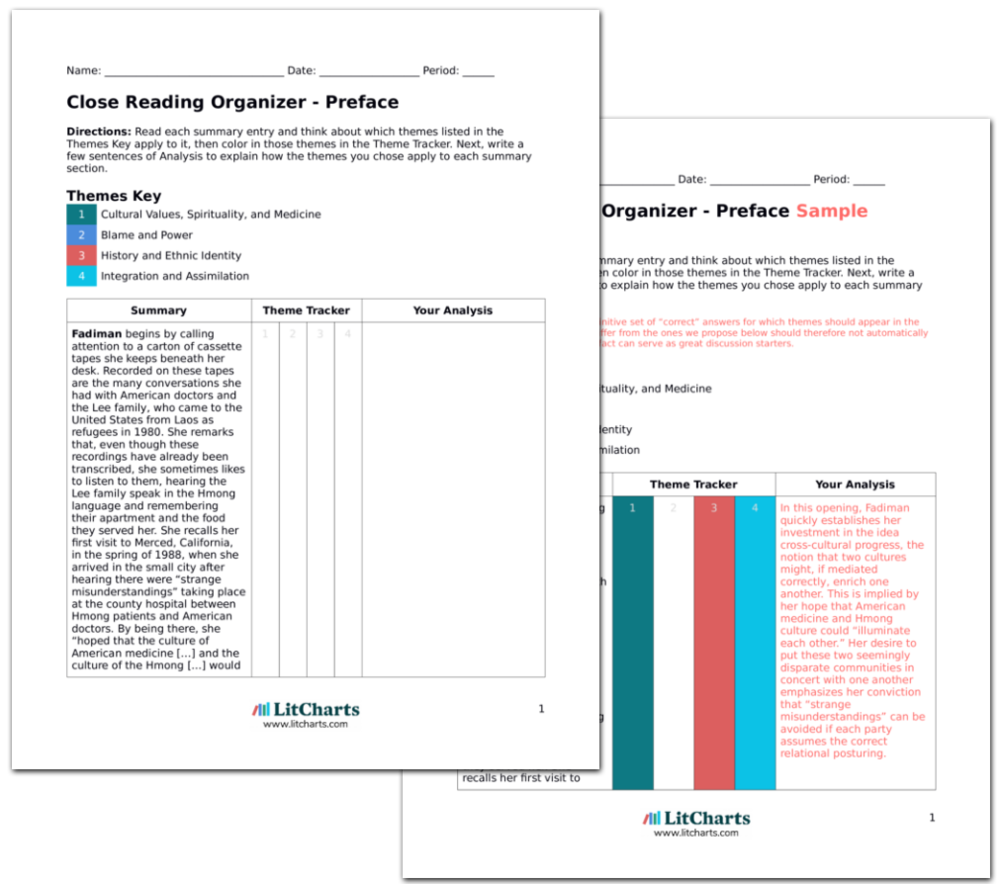