Welcome to the LitCharts study guide on Franz Kafka's The Trial. Created by the original team behind SparkNotes, LitCharts are the world's best literature guides.

A concise biography of Franz Kafka plus historical and literary context for The Trial.

A quick-reference summary: The Trial on a single page.

In-depth summary and analysis of every chapter of The Trial. Visual theme-tracking, too.

Explanations, analysis, and visualizations of The Trial's themes.

The Trial's important quotes, sortable by theme, character, or chapter.

Description, analysis, and timelines for The Trial's characters.

Explanations of The Trial's symbols, and tracking of where they appear.

An interactive data visualization of The Trial's plot and themes.

Kafka was born in Prague, the first of six children in a family of middle-class Jews. He preferred to speak and write German, as his family did, though most residents of Prague spoke Czech, a significant division both culturally and politically. He attended elementary school, gymnasium, and university within a few blocks of his birthplace. He studied law and got a job at an insurance company at age 24, though he resented having to work to pay the bills. Kafka's letters and journals reveal that he was tortured by a sense of his own inadequacy, sexually and socially, though to others he came off as quiet and intelligent. He had several passionate love affairs but never married. During his lifetime, Kafka is estimated to have burned at least 90% of everything he wrote, though he consented to publish The Metamorphosis at age 32. At 34, he was diagnosed with tuberculosis, which would lead to his death seven years later. When he died, he left a note for his friend, Max Brod, to destroy his remaining works. Fortunately, Brod disregarded this request, and published The Trial, The Castle, and Amerika. Despite Kafka's relatively small body of work, he has become one of the titans of world literature, and the adjective form of his name, "Kafkaesque," has come to signify the frustrations of modern existence.
Get the entire The Trial LitChart as a printable PDF.
"My students can't get enough of your charts and their results have gone through the roof." -Graham S.
Download 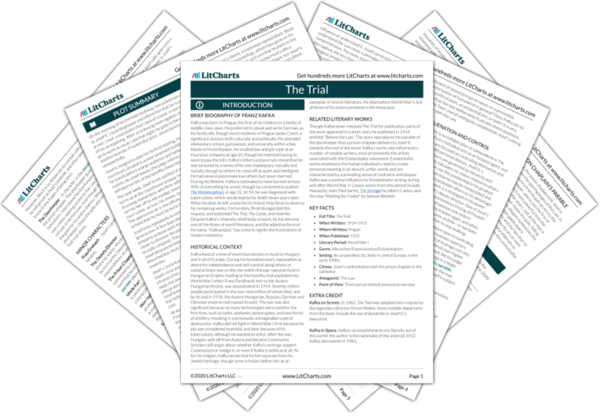 Historical Context of The Trial

Kafka lived at a time of enormous tension in Austria-Hungary and in all of Europe. During his formative years, nationalism (a desire for independence and self-control along ethnic or national lines) was on the rise within the pan-national Austro-Hungarian Empire, leading to the hostility that exploded into World War I when Franz Ferdinand, heir to the Austro-Hungarian throne, was assassinated in 1914. Seventy million people participated in the war, nine million of whom died, and by its end in 1918, the Austro-Hungarian, Russian, German and Ottoman empires had ceased to exist. The war was also significant because so many technologies were used for the first time, such as tanks, airplanes, poison gases, and new forms of artillery, resulting in a previously unimaginable scale of destruction. Kafka did not fight in World War I, first because his job was considered essential, and later because of his tuberculosis, although he wanted to enlist. After the war, Hungary split off from Austria and became Communist. Scholars still argue about whether Kafka's writings support Communism or malign it, or even if Kafka is political at all. As for his religion, Kafka wrote that he felt separate from his Jewish heritage, though some scholars define him as an exemplar of Jewish literature. He died before World War II, but all three of his sisters perished in the Holocaust.

Other Books Related to The Trial

Though Kafka never released The Trial for publication, parts of the work appeared in a short story he published in 1914 entitled “Before the Law.” The story reproduces the parable of the doorkeeper that a prison chaplain delivers to Josef K. towards the end of the novel. Kafka’s works also influenced a number of notable writers, most prominently the artists associated with the Existentialist movement. Existentialist works emphasize the human individual’s need to create personal meaning in an absurd, unfair world, and are characterized by a prevailing sense of confusion and despair. Kafka was a seminal influence for Existentialist writing during and after World War II. Classic works from this period include Nausea by Jean-Paul Sartre, The Stranger by Albert Camus, and the play "Waiting for Godot" by Samuel Beckett.
Key Facts about The Trial

Extra Credit for The Trial

Kafka on Screen. In 1962, The Trial was adapted into a movie by the legendary director Orson Welles. Some notable departures from the book include the use of dynamite in Josef K.’s execution.

Kafka in Space. Kafka’s accomplishments are literally out of this world: the author is the namesake of the asteroid 3412 Kafka, discovered in 1983.