Download this LitChart! (PDF)
Teachers and parents! Struggling with distance learning? Our Teacher Edition on The Vegetarian can help.

Welcome to the LitCharts study guide on Han Kang's The Vegetarian. Created by the original team behind SparkNotes, LitCharts are the world's best literature guides.

A concise biography of Han Kang plus historical and literary context for The Vegetarian.

A quick-reference summary: The Vegetarian on a single page.

In-depth summary and analysis of every chapter of The Vegetarian. Visual theme-tracking, too.

Explanations, analysis, and visualizations of The Vegetarian's themes.

The Vegetarian's important quotes, sortable by theme, character, or chapter.

Description, analysis, and timelines for The Vegetarian's characters.

Explanations of The Vegetarian's symbols, and tracking of where they appear.

An interactive data visualization of The Vegetarian's plot and themes.

Han was born in Gwangju, South Korea, before moving to Suyuri at 10 years old. She studied Korean literature at Yonsei University. Following college, her poetry was featured in the journal Literature and Society in 1993. The following year, she won the 1994 Seoul Shinmun Spring Literary Contest with her debut novel Red Anchor. Since then, she has published several short story collections and seven novels. She won the Yi Sang Literary Prize in 2005, the 2000 Today’s Young Artist Award, and the Korean Literature Novel Award. She wrote The Vegetarian in 2007, and following its translation and publication in English by Deborah Smith, Han won the Man Booker Prize. Han currently teaches creative writing at the Seoul Institute of the Arts.
Get the entire The Vegetarian LitChart as a printable PDF.
"My students can't get enough of your charts and their results have gone through the roof." -Graham S.
Download 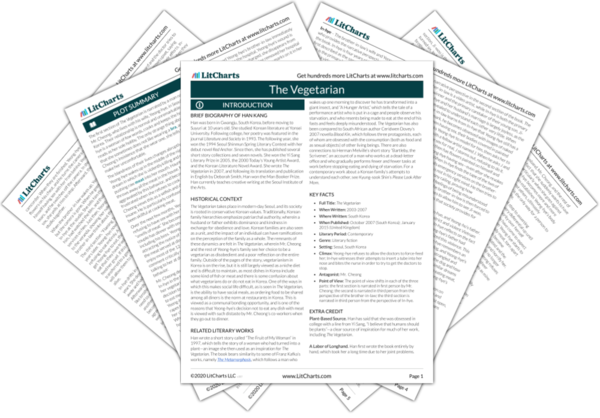 Historical Context of The Vegetarian

The Vegetarian takes place in modern-day Seoul, and its society is rooted in conservative Korean values. Traditionally, Korean family hierarchies emphasize patriarchal authority, wherein a husband or father exhibits dominance and kindness in exchange for obedience and love. Korean families are also seen as a unit, and the impact of an individual can have ramifications on the perception of the family as a whole. The remnants of these dynamics are felt in The Vegetarian, wherein Mr. Cheong and the rest of Yeong-hye’s family see her choice to be a vegetarian as disobedient and a poor reflection on the entire family. Outside of the pages of the story, vegetarianism in Korea is on the rise, but it is still largely viewed as a niche diet and is difficult to maintain, as most dishes in Korea include some kind of fish or meat and there is some confusion about what vegetarians do or do not eat in Korea. One of the ways in which this makes social life difficult, as is seen in The Vegetarian, is the ability to have social meals, as ordering food to be shared among all diners is the norm at restaurants in Korea. This is viewed as a communal bonding opportunity, and is one of the reasons that Yeong-hye’s decision not to eat any dish with meat is viewed with such distaste by Mr. Cheong’s co-workers when they go out to dinner.

Other Books Related to The Vegetarian

Han wrote a short story called “The Fruit of My Woman” in 1997, which tells the story of a woman who had turned into a plant—an image she then used as an inspiration for The Vegetarian. The book bears similarity to some of Franz Kafka’s works, namely The Metamorphosis, which follows a man who wakes up one morning to discover he has transformed into a giant insect, and “A Hunger Artist,” which tells the tale of a performance artist who is put in a cage and people observe his starvation, and who resents being made to eat at the end of his fasts and feels deeply misunderstood. The Vegetarian has also been compared to South African author Ceridwen Dovey’s 2007 novella Blood Kin, which follows three protagonists, each of whom are obsessed with the consumption (both as food and as sexual objects) of other living beings. There are also connections to Herman Melville’s short story “Bartleby, the Scrivener,” an account of a man who works at a dead-letter office and who gradually performs fewer and fewer tasks at work before stopping eating and dying of starvation. For a contemporary work about a Korean family’s attempts to understand each other, see Kyung-sook Shin’s Please Look After Mom.
Key Facts about The Vegetarian

Extra Credit for The Vegetarian

Plant-Based Source. Han has said that she was obsessed in college with a line from Yi Sang, “I believe that humans should be plants”—a clear source of inspiration for much of her work, including The Vegetarian.

A Labor of Longhand. Han first wrote the book entirely by hand, which took her a long time due to her joint problems. 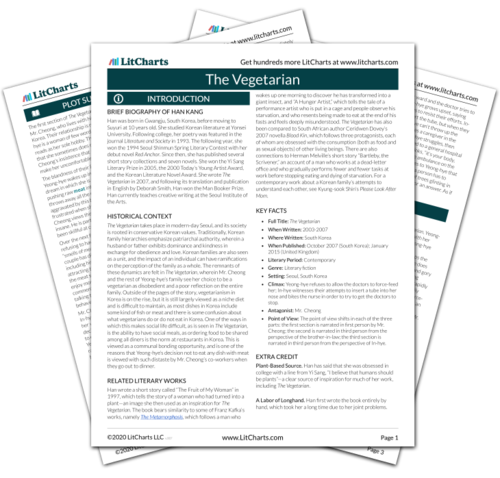 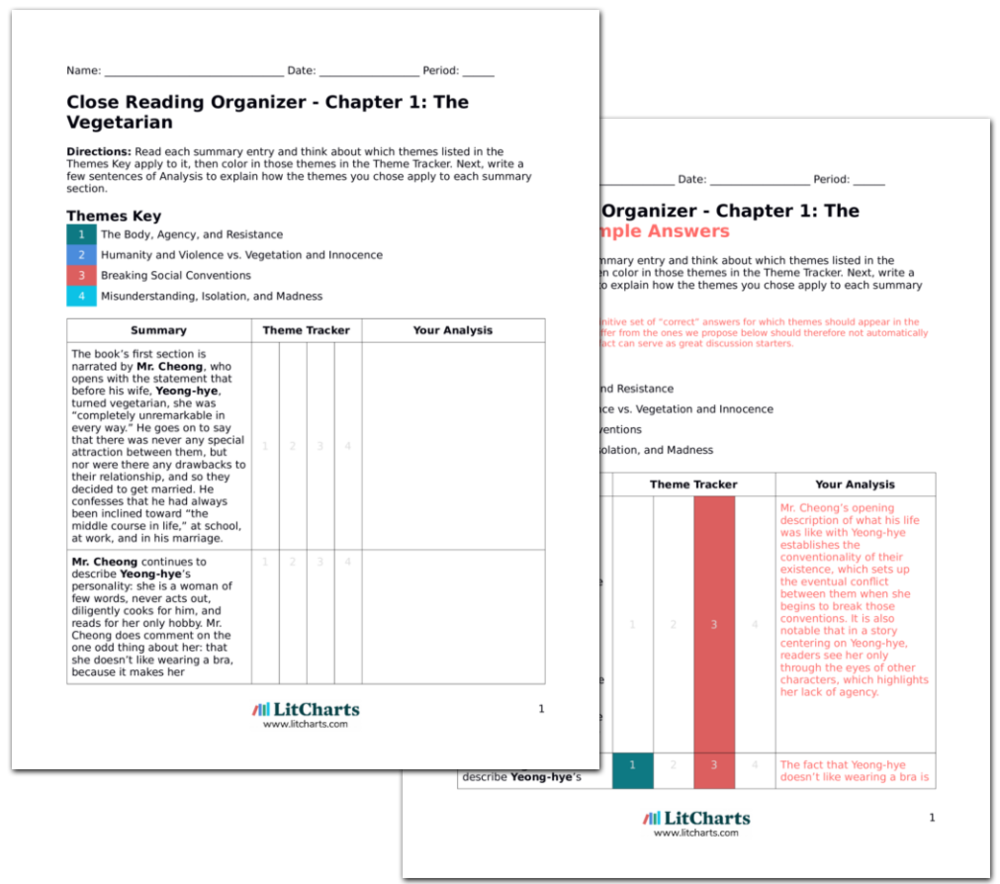